Did factory farming cause the swine flu outbreak?

The way we're raising animals, says one epidemiologist, is "like rolling the dice" 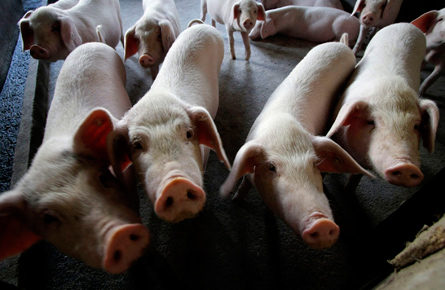 No one yet knows for sure where this swine-flu came from, but the people who live in the Mexican town that is being called ground zero of the outbreak, think they do. The Mexican press is reporting that locals in the hometown of Edgar Hernandez, the four-year-old boy who may be the first person to have caught the illness, say a pig farm is to blame. The town is home to a Confined Animal Feed Operation (CAFO) that is 50 per cent owned by Smithfield Foods Inc., the largest fresh pork and packaged-meat company in the United States. Residents claim that the flies that swarm in the CAFO’s open-air lagoons where the pig manure is stored have caused a high rate of respiratory infection in the town.

Mexican officials as well as the company deny any link. In a news release, the company states that “it has found no clinical signs or symptoms” of the flu virus in either their herd or employees. However, the chance that pig manure spread an infection is “quite possible,” says Ellen Silbergeld, an epidemiologist and professor at the Johns Hopkins Bloomberg School of Public Health who has done studies on flies on poultry farms spreading pathogens.

Epidemiologists have long been aware that the way we raise our animals in large-scale, industrial operations increases the chance of viruses jumping from animals to humans and could be the breeding ground for a future pandemic. The majority of the meat we eat in Canada is raised on large farms where thousands of animals are kept together in close quarters. On an average hog farm in Saskatchewan, there are often more than 20,000 pigs being raised at one time. This kind of large-scale swine farm is common in Mexico too. In these conditions, pathogens spread quickly. “You have a lot of animals—of hosts—in a confined area,” says Silbergeld. “This is a text book situation for driving evolution of bacteria or viruses.” And each time a virus moves from one pig to the next, there is the chance that its genetic make-up will change.

With so many animals living together in the crowded barns, it’s more likely for two influenzas to co-exist and combine into one flu bug. This is most serious in a swine barn because viruses are able to recombine in pigs. The cells of their lungs can actually bind both human and avian flu viruses together. Then, farm workers can spread them to the population at large. “Certain people who are in contact with livestock are at risk of acquiring viruses from animals and spreading them to their families,” says Tara Smith, an epidemiologist at the University of Iowa who studies zoonotic disease. A study out of Iowa found that farm workers and their family members were more likely to have antibodies to swine flu, suggesting they had been infected in the past.

Even though large swine operations take precautions to ensure biosecurity—measures to prevent diseases from entering or leaving their barns—Dr. Silbergeld says they are not fully secure. “What goes on inside those operations are easily transferred outside of them into the general environment,” she says.

According to a report by the Pew Commission on Industrial Farm Animal Production, it is precisely the way we raise livestock on factory farms that has increased the likelihood of viruses jumping from animals to humans. A farmer 50 years ago would have come into contact with only a few animals every day and rarely been exposed to sick animals whereas today’s farm workers spend their entire workday with thousands of animals, a number of which can be sick. This means there is ample opportunity for transmission from animal to human. As well, there is the opportunity for workers to be infected with several strains at the same time, helping to make an influenza more virulent. “We need to examine the way we are raising animals, not just in North America, but worldwide, that contributes to this kind of mixing of viruses,” says Dr. Silbergeld. “It’s really like rolling the dice.”