An ode to my work-from-home dining table 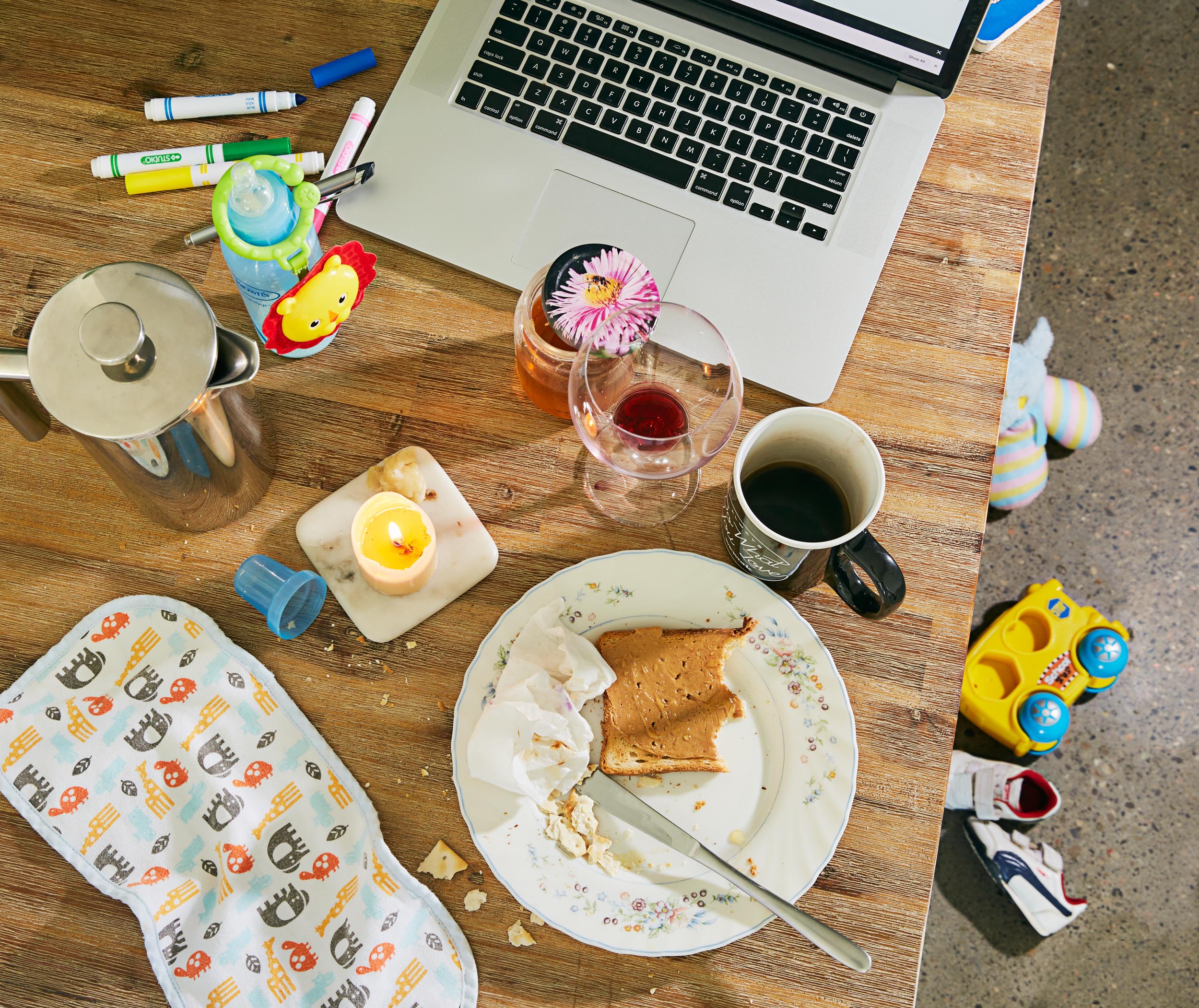 Every morning at 8:30, I’d put on a sweatshirt and yoga pants, brush my hair and slather on tinted moisturizer and a smack of lip balm. Destination: dining table. It was March 2020 and we had been asked to work from home.

Getting ready an hour before my 9:30 a.m. meeting meant I had enough time to nibble on a piece of toast and read the morning news. Sometimes, after waking up and walking out of my room, I’d find the table of the night before—a no-stem wineglass wafting sour, undrunk sips of wine, a crusted piece of fusilli, trickles of meat sauce now etched into the grainy wood. We’d had a big dinner; all of it cooked from scratch. It was the beginning of a pandemic and we had subscribed to the lifestyle of Dining In à la Alison Roman.

Before I started work, I’d wipe the table clean. I didn’t know it yet, but this would become the symbol of a new day—from dining to desk, from family to workspace. I’d plant a laptop, a French press, a mug, and a notepad and pen onto this makeshift escritoire. I was 12 weeks pregnant; the office of our 700-sq.-foot condo was being converted into a nursery.

MORE: To my dad, an art restorer; ‘You have operated a one-man hospital mending shattered souls’

As a magazine editor, I had the privilege of spending my days at the table, flaunting knitted sweaters on Slack calls, puttering around the fridge and ruminating on the idea of motherhood.

I daydreamed of the human growing inside of me while the 2020 almanac swapped full moons with the rise and fall of COVID cases. I giggled at work-from-home memes on social media, but in reality, less than half of Canada’s workforce was afforded the luxury of staying home, according to a recently released Labour Force Survey from Statistics Canada. Essential workers—in health care, transport, waste management and food services—grappled with their mortality on a daily basis. For the group logging in from home, staying put was doing the bare minimum in terms of public duty.

There’s a 40-foot honey locust tree right outside of the window and a view of the skyscrapers beyond in what was a deserted Toronto financial district. From the dining table, I watched the seasons change six times before workplaces began mandating vaccines. There’s a buzz in the downtown core again, and people have trickled back in.

RELATED: A physician to his mom: ‘The stress of life under the virus fell disproportionately onto you’

Back to cubicles, awkward elevator rides, chopped salads and pressed shirts. The work-from-home lot are anticipating their re-entry into the outside world, where what was appropriate to do on the inside is now not. So long loungewear, digital backdrops and Grocery Gateway; ta-ta midday laundry, Miss Vickie’s and virtual catch-up calls with your dad.

In late July, a PricewaterhouseCoopers survey found that 78 per cent of Canadian employers expected at least a partial return to the office by October, but only one in five employees said they want to go back full-time. Is it safe to admit I’d pick this table?

My son, Finian, is one now. He’s grown so much since I heard his first-ever cackle, when I discovered he had a raucous laugh like my own. He was sitting atop the dining table in a baby seat, with a mouth full of puréed red lentils. I was trilling my lips while nodding my head up and down—forehead up to the ceiling, chin down to the floor. He howled—and the howl rolled. It’s one of my fondest memories of a maternity leave spent at home.

READ: 35 years later, a student writes: ‘Its because of you that I became a teacher’

The table is messier now. On display are artifacts of a working mother: half-eaten butter croissant, empty paper coffee cup; a French press containing two-day-old coffee; splayed magazines, a notepad and a pen; a teether and art from daycare, too.

I’m still in yoga pants, reviewing stats on hybrid workplaces. The pandemic that’s taken nearly 30,000 Canadian lives isn’t over. A survey of 2,000 workers by KPMG found that 81 per cent of people believe their companies are not equipped to manage a hybrid model of work, with most being concerned about contracting a variant of the coronavirus, and 72 per cent reluctant to take public transport.

If they asked me where to choose, it would have to be right here, at this table. You?

This article appears in print in the January 2022 issue of Maclean’s magazine with the headline, “Dear Dining Table…” Subscribe to the monthly print magazine here.