Dispatch from the Higgs boson cafeteria

Or rather, 'restaurant,' where CERN physicists can eat three meals a day—and talk science 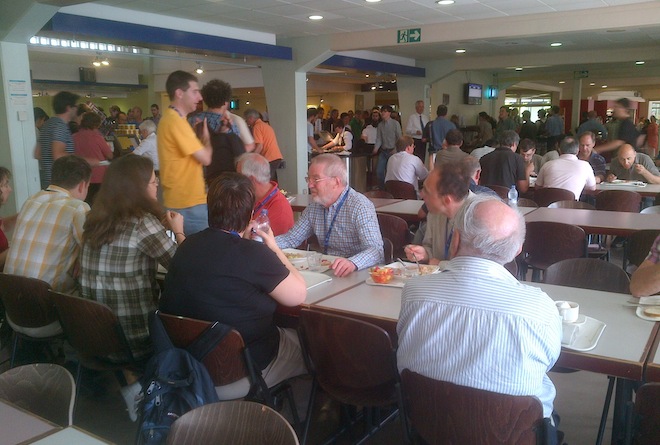 A few days after the discovery of the Higgs boson was announced, the physicists who “found” it could be spotted sitting in patio chairs outside their main research site, eating heaping plates of cafeteria-prepared moules frites under a scorching Swiss sun.

Inside the massive cafeteria at CERN (the European Organization for Nuclear Research, in Geneva), gaggles of 20-something graduate students navigate between breathtakingly overpriced food stations. Seated along smooth white tables, multi-generational and multi-ethnic clusters of physicists talk excitedly. Most are male; and most wear some variation of short-sleeved button-down and sneakers. Approaching 1pm, conversations linger over slices of cake and jars of apple juice.

The cafeteria is often where the magic happens, says Dr. Manuella Vincter, a physicist who works on ATLAS, one of the experiments that detected the Higgs boson. Offices at CERN are almost disconcertingly shabby, and the world’s top scientific theoreticians are often packed three or four to a cavernous, concrete room. The cafeteria offers physicists a respite from the darkness, and an open place to talk.

In fact, CERN physicists bristle when I offhandedly refer to the space as a “cafeteria.” It’s a “restaurant:” or “R1,” in the characteristically to-the-point parlance of its frequent customers.

The physicists, perhaps, have a right to be touchy about language. Many eat three meals a day in their “restaurant.” Just hours after the existence “the God particle” was announced to the public, most researchers found themselves back at R1, eating especially quickly to make up for time lost that morning. They were not, as one Maclean’s editor hypothesized, feting the long-sought-after boson with “nerd Mardi Gras” celebrations. They were, instead, back at work.

CERN, a massive complex of 1950s-era buildings that sits atop the Large Hadron Collider, is like a summer camp. Many researchers live on site: in one of a few “hostels” that are visible from R1’s patio. In the hostel occupied by summer students, residents are not permitted food or alcohol in their rooms. Longer-term researchers generally live off-site, but within walking distance, in apartment complexes occupied almost entirely by physicists. Dr. Anadi Canepa, a research scientist who works on antimatter, used to live a few kilometers away—but she moved back into a CERN hostel “to save time.” Canepa’s daily stops—office, cafeteria, and apartment building—are within steps of each other. In her first two years at CERN, the petite physicist took only seven days off.

So everyone relishes small vacations at R1. About a week ago, Dr. Peter Higgs himself, the boson’s namesake, was spotted at one of the restaurant’s tables. He was eating lunch alone.

Because they admittedly don’t get out much, many CERN physicists, like Canepa, are married to other CERN physicists. (Canepa’s husband also works in antimatter). They shake their heads when I ask if their first-borns will be named “Higgs.”

Around 7pm, the patio outside R1 is bustling again. Perhaps the next major discovery to come out of CERN is being plotted. But it doesn’t look like that.

If their shirts had sleeves, it would be fair to say the physicists have rolled them up for the evening. With no pubs within easy distance of the research facility, physicists often spend their evenings sipping beer in R1’s garden, with the peaks of Mount Blanc as a backdrop.

Some tell me they will go back to work later.