When it comes to food these days, everything old is new again, which isn’t that surprising after years of genuflecting in the church of molecular gastronomy. The only altar left for foodies to worship at is an old one. Jars of preserved goods, just like grandma used to make, line the kitchen shelves of countless restaurants. Noma, voted the best restaurant in the world last year, fashions most of its dishes from ingredients foraged from the Danish woods. Menus, including the one at Chicago’s Next, are built around a particular time and place, like Paris circa 1906. Chefs, including Charleston, S.C.-based Sean Brock, hunt down long-forgotten varieties of grains, vegetables and fruit, and Toronto’s own Jamie Kennedy prefers the rare Canadian heritage breed of wheat called red fife.

And then there’s Patrick McGovern, an archaeologist at the University of Pennsylvania Museum who, after analyzing the residue that lingers in the nooks and crannies of millennia-old potted vessels, is bringing ancient elixirs back to life. It’s gastronomical nostalgia on steroids.

McGovern, a pioneer in the field of biomolecular archaeology who did undergraduate work in chemistry and has a Ph.D. in Near Eastern archaeology, has collaborated on five beverages with Sam Calagione, the award-winning founder and president of Dogfish Head brewery in Delaware: Midas Touch, an Iron Age beer based on samples found in the king’s supposed tomb; Chateau Jiahu, a Chinese blend of grapes, rice and honey based on the oldest sample of booze ever discovered; Theobrama, a 3,200 year-old Honduran chocolate drink; Chicha, a corn beer with Peruvian lineage; and Ta Henket, an Egyptian ale being released in December with 18,000-year-old components.

Cracking the chemical codes of these long-forgotten cocktails, however, is a bit complicated. “It’s not like you just put the sample into a black box and push a button and have the answers come out,” explains McGovern with a hearty laugh. “You have to think of the compounds you’re looking for.” Those are the chemical fingerprints of organic ingredients that survive thousands of years, unlike alcohol, which evaporates in a few months. Through mass and infrared spectrometry, and gas and liquid chromatography, McGovern and his team discovered organic compounds that indicate the presence of fermented beverages.

One of his first forays into biomolecular archaeology in the 1980s had McGovern unravelling the recipe for the ancient, mollusc-based, purple dye reserved for Phoenician royalty. “That really showed that these ancient organic materials could stick around for 3,000 years, at least. And then people started coming to me with samples.” The first came courtesy of a colleague who found red stains in the bottom of a pot at the Royal Ontario Museum, which McGovern confirmed was 5,000-year-old wine from Iran. 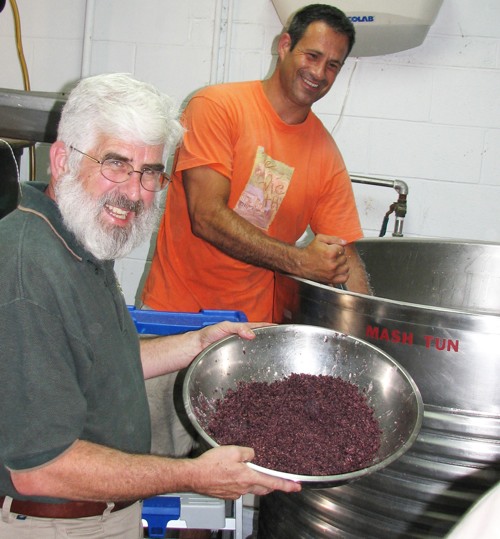 Later samples were retrieved closer to home: in a storage room steps away from his office at the university’s Penn Museum, the 66-year-old archaeologist found two jars from the early neolithic site Hajji Firuz in Iran. McGovern had stumbled upon a grape wine from 5,400 BCE, some 3,000 years older than the previous record holder.

“And of course Midas was even better,” says McGovern, referring to the 157 bronze vessels from the Midas mound at Gordion in Turkey, a 2,700-year-old Iron Age tomb that the Penn Museum excavated in 1957. “You just had to walk up a couple flights of stairs and there were the bags [of residue] sitting there.” McGovern and his team retrieved more than two kilograms of residue to work with—a biomolecular archaeologist’s jackpot, considering only a couple of milligrams are needed for analysis. Fingerprint compounds revealed the farewell funerary dinner included spicy barbecued lamb and stewed lentils, washed down with an Iron Age grog made from an unusual combination of grape wine, barley beer and mead. “When we made that discovery,” laughs McGovern, “we were all thinking, ‘Well gee, that sounds just awful!’ That’s when we got started with the experimental archaeology, to see if we could come up with something drinkable.”

And he did just that, with Calagione providing the brewing know-how. “He’s like the rock star of the beer industry,” explains McGovern. “He says that it’s the most expensive beer he’s ever made.” Not surprising, considering it contains the best saffron, honey from Greece, malted barley native to the Middle East and yellow Muscat grapes, which DNA analysis has revealed to be one of the earliest cultivated grapes.

McGovern decided to stage a gala recreation of the feast at the museum in 2000. Pam Horowitz, the museum’s chef at the time, “came up with an interpretation of barbecued lamb and lentil stew that was so good and went really well with the drink,” raves McGovern. Dogfish Head started selling Midas Touch in early 2001 and it has since gone on to win more awards than any of the 100-plus “off-centered ales for off-centered people” that it bottles and kegs.

Not all of the archaeologist’s discoveries are made by raiding museum storage rooms. In 1999, McGovern travelled to China, where he was shown some neolithic jar shards from Jiahu, an extraordinary archaeological site in the Yellow River valley of north-central China that’s home to some of the country’s earliest pottery, the oldest rice, the earliest example of written Chinese characters, and the oldest playable instruments (flutes made from the wing bones of red-crowned cranes). Back home—with the help of many colleagues across several countries—McGovern slowly but surely identified the chemical fingerprints of the jar’s ingredients. And the mixture of mead, rice, wild grapes and hawthorn fruit was about 9,000 years old, the earliest example of an alcoholic beverage in the world.

Chateau Jiahu, McGovern and Calagione’s recreation of the neolithic grog, is the archaeologist’s favourite. “It has a sweet and sour profile that goes really well with Asian food.” It also won a gold medal at the largest beer tasting event in the world, the Great American Beer Festival, a couple of years ago. When McGovern and Calagione took the stage to accept the award, it must have been quite a sight. McGovern, with his neatly coiffed full head of silver hair and bristly salt and pepper beard, resembles a more burly, jovial-looking George Lucas, while Calagione is his leading man: a 2008 New Yorker profile said the 42-year-old, with his chiselled features, perpetual tan and surfer’s loose, muscular frame, belonged in a Budweiser commercial. “Sam took the medal and put it over my neck for me to keep,” says McGovern. “Now I have a little shrine in my office with the medal draped over the neck of the Chateau Jiahu bottle and I’ve got some of the ancient shards we analyzed right there, too.”

The Jiahu site illustrates McGovern’s hypothesis that, since the paleolithic era, fermented beverages not only satisfied dietary needs but fuelled the human imagination, giving rise to the arts, religion and even language. “It would have influenced how things developed enormously whether biological or culturally. Biologically we have the right sensory organs to pick up alcohol and we have the brain that responds to it and a digestive tract that actually is helped along by fermented beverages. Why wouldn’t you have it as one of the key components of how humans developed?” McGovern briefly pauses and continues. “It makes more sense than meat-eating, which is what the paleolithic people are always talking about. I always wonder why they don’t bring fermented beverages into the mix considering they sure like to bring them to their digs.”

The duo’s next collaboration involves a trip to Italy in March. “Sam’s got these contacts with microbreweries in Italy and they want to have this microbrewery in Manhattan on the top floor of this building looking out at the Flatiron.” Which sounds like the site of Eataly, the happening Italian food and drink emporium. “Yes, that’s it!” exclaims McGovern, but he’ll say nothing more.

Why all the nostalgia for food and drink these days? “I think it’s the whole notion, at least in our case, of a liquid time capsule transporting people into the past,” says McGovern. “And at the same time as they’re tasting, they’re discovering how it came about and how it relates to the human race in general. It’s like travelling through time.”