From an early age he faced hardship and loss, but found joy in swimming and helping others—twice saving a life 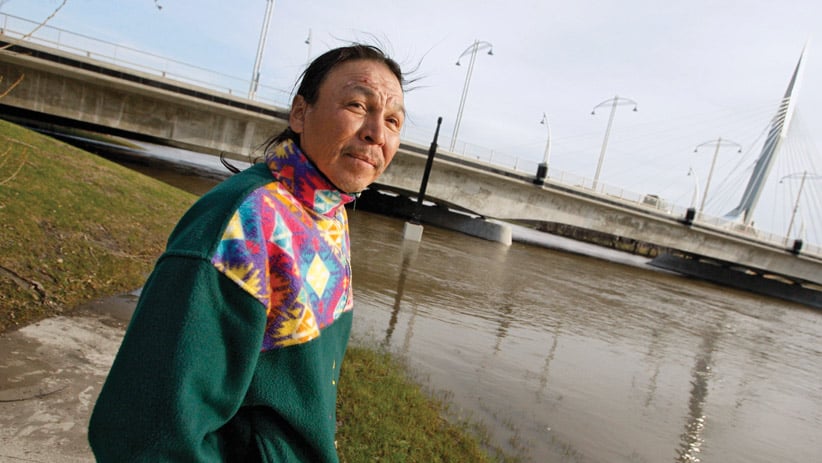 Faron Hall was born May 14, 1964, on the Dakota Tipi First Nation reserve near Portage la Prairie, Man., to Maryanne Hall and John Hupa. He had an unstable childhood, with his parents constantly away working on farms and with very little supervision on the reserve. He had at least two sisters and an older brother.

His uncle, Neil Hall, says Faron was taken away by Children’s Aid when he was around three; he was brought back to the reserve when he was eight. Neil remembers that Faron was friends with everyone and loved playing sports. He especially loved to swim. “All the kids used to hang around the river and he would just swim all day, whenever he could,” says Neil. Faron was also known for his generosity. He had a crush on a young girl and wanted to show her how much he cared. She really wanted candy, so Faron walked two miles to the nearest store to buy some for her. “He would always go out of his way to make people happy,” says Neil.

When Faron was 18, he entered a high school and employment skills program for inner-city youth in Winnipeg. That’s where he met his first girlfriend, Cheryl James, who was 19 at the time. She was impressed by how confident and well-spoken he was. “He wasn’t just interested in helping himself, but he also wanted to help the rest of us in the class succeed,” she says. His goal was to become a teacher. After Faron graduated from the program, he and Cheryl lived together for eight years while Faron took odd jobs around the city. Along with Cheryl’s two nephews, they would often travel to see Faron’s father who lived on the Sioux Valley reserve in southeastern Manitoba. “Faron was really good with [the boys],” she says. “He liked to make sure they were entertained and taken care of.”

For years Faron drank socially, but after his mother died he began to drink heavily. “That tore him apart,” says Neil. “He started not caring because he felt really bad he didn’t reconnect with her sooner.” His sister was stabbed to death soon afterwards, which was the breaking point for him. “He told me he prayed to the Creator to keep them safe and help him understand why it happened,” says Cheryl. Faron became homeless and spent his time in the St. Boniface area of Winnipeg, living in tents he set up with his friends along the bank of the Red River.

In May 2009, 19-year-old Joseph Mousseau was fooling around with friends on the Provencher Bridge and fell over the guardrail into the river. Faron leaped in and swam against the rough current to rescue him. Marion Willis saw the whole thing happen from the bridge, alerted the police and ran down to make sure both men were okay. Willis took Faron into her home and ensured he received proper medical treatment. She and Faron became close friends, and he opened her eyes to what life was like for a homeless Aboriginal man in the city. “Faron was the wounded healer, always trying to heal the wounded,” she says. “He so deeply cared about those who were suffering on the riverbanks and on the streets.”

Four months later, Faron rescued another person from the river­—his friend, Tara Beardy. This solidified his reputation as Winnipeg’s “Homeless Hero” and he was presented with many awards, including the mayor’s medal of valour. In December, he received the Manitoba Royal Lifesaving Society award; he requested the first $1,000 from an endowment fund set up in his name be sent to a local homeless shelter.

The following year, Faron was determined to get his life back on track and was set to graduate from an addictions program. Willis says Faron was considering going back to school. But he didn’t enjoy life in the limelight and constantly being recognized. “He couldn’t understand what all the fuss was about. He just believed that if somebody fell in the river and you were a good swimmer, you would go in and pull them out,” says Willis. Faron particularly hated how the media followed his every move, especially when he would get into trouble. “Every time he slipped up for things like being picked up for being drunk or caught panhandling, it would make national headlines. It was like a public shaming for him.”

Last month, Faron’s father died and he went to attend the funeral. He had recently been released from jail after facing an assault charge. Before he left, he asked Willis to help get him into a treatment centre in Ontario. She agreed and began the process. A few days after his father’s funeral, Faron went missing and police began to search for him. On Aug. 17, they pulled Faron’s body from the river. The police are not treating his death as suspicious.