He was an RCMP member known for his work ethic and heroism. Stern in appearance, he was a ‘teddy bear’ at heart 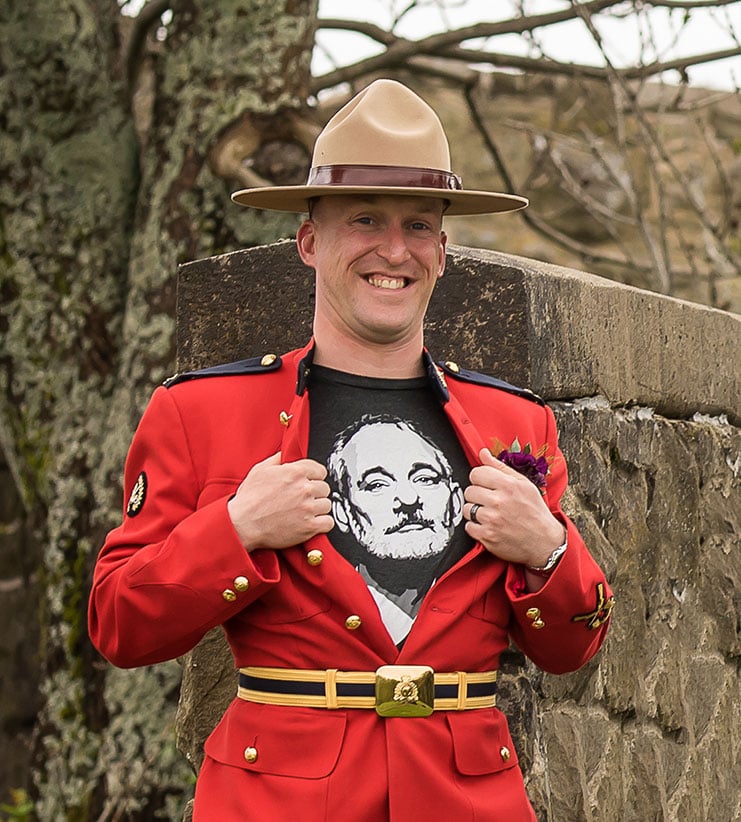 Francis Deschênes was born on April 17, 1982, in Edmundston, N.B., to Bertrand, a forest technician, and Marie-Paule, a secretary for the provincial government. He was followed two years later by a brother, Patrick.

Growing up in the village of Sainte-Anne-de-Madawaska, N.B., Francis easily made friends. He played baseball and badminton, enjoyed skating, took karate and for many of his school years participated in Les Jeux d’Acadie in track & field. “He always liked to be involved in some activity,” says Marie-Paule.

Francis loved the outdoors. In his teenage years he attended summer camps in places like Bathurst and Moncton, N.B., where he canoed, hiked and practised orienteering. A member of La maison des jeunes, a youth club, in Sainte-Anne, one year Francis represented his region at a Fredericton RCMP seminar. “I think that is where being a police officer started to be a goal for him,” says his mother.

In 2002, Frank, as most called him, studied administration at the University of Moncton’s Edmundston campus. But he yearned to do police work. In 2004, he told his surprised parents he was moving to Sudbury, Ont., to study policing at Collège Boréal. While there, he applied to the RCMP and soon began training at the RCMP Academy in Regina. By November 2004, he was a member.

In 2007, Francis was a constable at the Truro, N.S., detachment when he got a message on an online dating service. Savannah Bennett, who lived two hours’ drive away in Moncton, had spotted Frank’s profile photo. He was in a golf shirt and shorts, looking at a lake, but his face wasn’t visible. “I said to myself, I have to talk to him,” says Savannah, still unsure why.

Despite his somewhat stern appearance, Savannah says she found a man who, at heart, was “a soft little teddy bear.”

After seven months of a long-distance relationship, Savannah moved in with Frank in Truro. In 2010 they moved to Ottawa when Frank was accepted as one of the 32 riders in the RCMP’s iconic Musical Ride. He wasn’t a natural at horsemanship. “He really had to work for it,” laughs Savannah. “He was bowlegged. So he didn’t quite fit the horse properly.”

On Saturday mornings, they often went to the local shooting range. Savannah insists she was the better shot, though she missed her mark one memorable day. “I had a Blackberry, and I said when I upgrade my phone, I am shooting this one.” When the day came, Frank, wanting to record the event, propped up his new iPhone next to Savannah’s Blackberry about 60 metres away. “I shoot, and it falls over. ‘Did you see that honey? I hit it! I hit it!’ ” Frank, puzzled, looked downrange through the scope. “All of a sudden, he stands up,” recalls Savannah, “and, pardon my language, he asks, ‘Did you shoot my f–king phone?!’ I felt horrible, but at the same time, I couldn’t stop laughing.”

Bryce Haight, a fellow RCMP officer, was, as Savannah jokingly called him, Frank’s “work wife.” The two worked together in Traffic Services at the Amherst detachment in Nova Scotia in 2015. “Frank,” says Bryce, “was a little bit of a legend in the area for his work ethic, determination and drive.” Frank and Bryce patrolled highways and used quads and snowmobiles to enforce traffic laws and intercept drugs. Frank was also a traffic reconstructionist and member of the Special Tactical Operations troop. “One of the things I admired about Frank was he was always what we call ofﬁcer-safety minded,” says Bryce. “His head was always on a swivel, which made things safer for me at work.”

In 2014, Frank took Savannah on a long motorcycle trip to the peak of Mount Washington in New Hampshire, where he proposed. They finally married on May 27, 2017, on the 10th anniversary of the day they first met in person.

Savannah never worried about the dangers of Frank’s profession, even when, in 2008, he was hailed as a hero when he used his cruiser to push an inebriated 26-year-old woman in another car off a railway track near Truro, seconds before a train blew by.

“Frank truly believed he was making a difference with what he did,” says Sarah.

On Sept. 12 at around 6 p.m., Frank was helping two people in an SUV change a flat on the Trans-Canada Highway near Memramcook, N.B. A utility van collided with the marked police car and the SUV, killing Frank. He was 35.