From haircuts to jumpsuits, we’re moving toward gender neutrality

Expect the movement to change the messages we hear, the forms we fill out and the products we buy. But not without pushback. 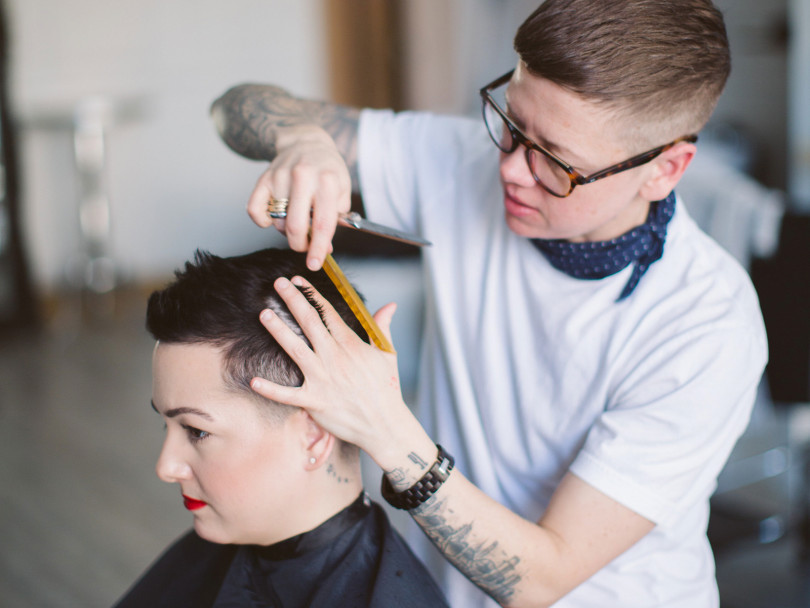 In late November, Kristin Rankin, owner of the Toronto hair salon Fox & Jane, travelled to Geneva to meet with the board of Pantene to discuss the hair-care giant’s new #HairHasNoGender campaign. Rankin has partnered with the European unit of Procter & Gamble, owners of Pantene, via the Dresscode Project, which the hair stylist founded in 2017 to promote LGBTQ2S+ inclusivity in the salon industry and to end the historic discriminatory practice of charging women more for haircuts (instead, hair length determines price). More than 200 salons across Canada and the U.S. have signed on, with numbers growing.

Now Rankin is spreading the message in Europe. Earlier in November, the hair stylist was in England, where the Superstore drug chain promoted the partnership with Pantene, and an event attended by Instagram influencers and stylists was a big success. After Geneva, Rankin attended a gender-neutral hair-cutting event in Italy, and has been profiled in that country’s Vanity Fair.

Expect the movement towards gender neutrality to change the messages we hear, the forms we fill out and the products we buy. Corporations are jumping on board. United just became the first airline to eliminate gender pronouns when booking flights. Air Canada will replace its “ladies and gentlemen” greeting with the gender-neutral “everybody”—language to be adopted company-wide. In October, sanitary product brand Always announced it will remove the Venus symbol on its packaging to be inclusive of transgender and non-binary customers. The shift has already summoned debate and opposition in a society that still views biological sex as the basis of identity and economies, the latter manifesting most markedly in the “pink tax,” through which women have been charged more for everything from razors to dry-cleaning.

READ: What it would really take to close the gender wage gap

Alyssa Kerbel, who 11 years ago founded Mini Mioche, a line of non-gendered baby clothes in muted colours, reports a growing rejection of “pink is for girls, blue is for boys.” Parents increasingly reject gendered stereotyping, Kerbel says—“the ‘boys like trucks and wear astronaut graphics and girls like pretty airy-fairy things.’ ” Rankin, who is queer and identifies as non-binary, also speaks of a generational shift: “Youth today are so much more inclusive and gender-fluid.” Gender has been a source of judgment and inequity for too long, says Rankin, whose salon removed men’s and women’s pricing years ago: “It’s not fair that people who identify as women pay more for a haircut, particularly if their hair is really short.”

Questioning the societal construction of gender underlines Toronto’s Bata Shoe Museum’s May 2020 show, “The Great Divide: 18th-Century Footwear and the Enlightenment.” Elizabeth Semmelhack, the museum’s creative director, tells Maclean’s that the exhibit will examine how concepts viewed as “natural,” including gender, were established in the Enlightenment. Semmelhack, a fashion historian who has examined how fashion trends are fluid and not fixed in terms of gender, knows this territory well: centuries before high heels were feminized and hyper-sexualized, men wore them as an equestrian tool, she notes.

Semmelhack doesn’t expect a quick move toward gender neutrality in fashion: because we’ve used fashion to express and establish gender for so long, it’s hard to try to neutralize it. Even when we talk about “unisex,” she says, it’s women wearing something that’s traditionally male. “Men are viewed as the ‘neutral’—the ‘standard’—and everything outside that as ‘the other,’ ” she says. (The male baseline as the norm is also evident in the trend to gender-neutral names, which results in far more “Dylans” than “Ashleys.”)

READ: For transgender women, the pay equity gap is even wider

The current fashionability of the jumpsuit for women can be seen as a move to unisex, Semmelhack allows: “It doesn’t emphasize sex though it’s associated with physical labour, which tends to be coded male.”

Challenges to the status quo are always destabilizing, Semmelhack says: “You’ll see efforts to keep perceived gender norms as they are—or to retrench them in the form of hyper-gendering.” The popularity of “gender-reveal” parties is also a retrograde flashback, she notes: “Is it a last gasp?”

Rankin is hopeful it is, observing that de-gendered hair products could be next. “One of the things we stress is that hair has no gender—it’s scientifically proven. It’s dead cells attached to organic matter.” As marketplaces turn, so will formerly entrenched beliefs, says Semmelhack, who wants her exhibit to raise questions: “Are we still perpetuating these long-standing concepts because they’re real? Or is it time to reconsider?” Already, the answers are becoming evident.

This article appears in print in the January 2020 issue of Maclean’s magazine with the headline, “His, hers, and everybody’s.” Order a copy of the Year Ahead special issue here. Subscribe to the monthly print magazine here.