He kept his mind sharp by reciting poetry and kept fit by swimming the Detroit River. He dreamt of living to 100. 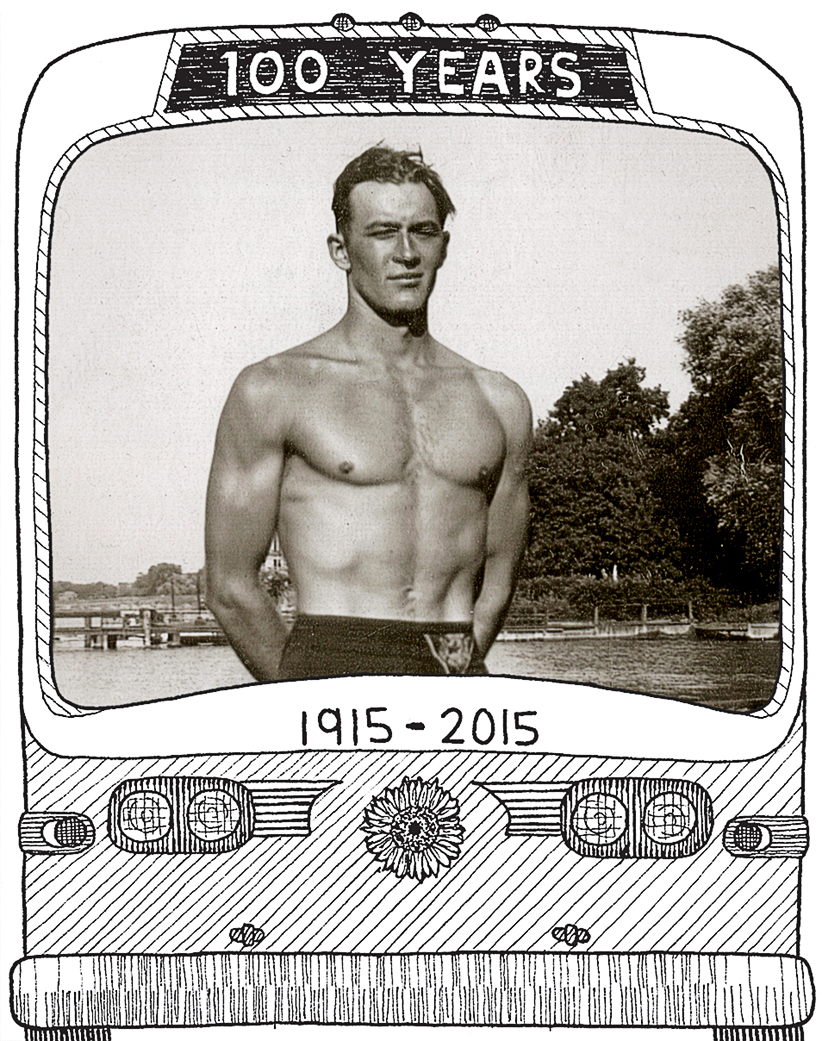 Gerald “Jerry” Elwood Shaw was born during a blizzard on the night of Feb. 9, 1915, in Dresden, Ont. His father, Chester, was a trolley driver, and his mother, Mildred, was a stay-at-home mom. His sister, Romi, was born in 1929.

As a toddler, Jerry loved to explore around his parents’ backyard. When he was about three years old, he snuck out of the house and got trapped inside the family’s well, clutching onto the bars at the top to stop himself from falling to the bottom. He screamed until his mother came to rescue him, just before he lost his grip.

Jerry attended W.D. Lowe Vocational School in downtown Windsor, Ont. He disliked school, and struggled through most of it, but instantly fell in love with his poetry classes. Every day, the teacher would have the students recite different poems, and he absorbed as much of it as possible. (He would later recite the poems to keep his memory sharp.) One of his favourites was The Burial of Moses by Cecil Frances Alexander. “In a vale in the land of Moab / There lies a lonely grave; And no man knows that sepulcher / And no man saw it e’er,” he would say while standing at the front of the class.

He eventually dropped out of class, and went to work on a farm near Wallaceburg, Ont. A few years later, Jerry moved back to Windsor and worked on the assembly line at Chrysler Canada. He stayed active by swimming across the Detroit River and playing badminton. During a doubles match in 1938, he found himself across the net from Kathryn Kay. “I wouldn’t say it was love at first sight,” recalls their second of three children, Lynne, who was born in 1946. “But he loved the aggressive way she played sports and they became fast friends.” On their wedding day, in 1941, Jerry fainted before Kathryn reached the altar, but he eventually came to and the ceremony continued. Lynne’s brother, Ronald, was born in 1942, and Wayne was born in 1948. By this time, Jerry had taken a job as a bus driver in Windsor, a position he held until his retirement in 1980.

When grandchildren arrived on the scene, he was excited to pass on his values and his love of sports. Over the years, Jerry and Kathryn’s family grew to include seven grandchildren and 17 great-grandchildren. Jerry stayed very active as he got older, and his family was always surprised by how healthy and independent he remained. “He told everyone that the secret to a long life was exercise, eating well, but he also enjoyed two or three ales a day, and he liked his vodka,” says his granddaughter Kim.

In his 90s, after Kathryn died in 2012 at the age of 94, Jerry made it his new goal to live to be 100. On his 99th birthday, he made a pact with his grandson Scott, to celebrate their birthdays together in 2015. Scott would turn 50 on Feb. 7, and Jerry would turn 100 on the ninth. “He thought it was pretty neat that we were almost exactly 50 years apart,” Scott says. “He called it a celebration of 150 years of life.” On the ninth of every month after that, Jerry would count down to his 100th.

In January, about one month before his birthday, he received certificates from the Queen, the Prime Minister and the Governor General congratulating him for living for 100 years. “I told him, ‘You better make it to be 100 now!’ ” says Lynne. Around that time, Jerry started to feel weaker and asked to be taken into palliative care, but he could still move and talk up a storm. He wasn’t strong enough to host a big birthday, so Scott drove from his home in Ottawa on his birthday, Feb. 7, to celebrate. Scott, Kim, Lynne and their spouses gathered in Jerry’s room and toasted his health. Later in the evening, he launched into recitations of his poems. “He got his back so straight, and his chin up high, just like how he’d been taught in the eighth grade,” says Lynne. “We weren’t going to stay long, but we had a feeling that night was special,” says Kim. As everybody left for the evening, Jerry waved goodbye and said, “I’m going to remember this for the rest of my life.”

The next morning, Kim and Lynne got a call from a nurse saying Jerry wasn’t responsive. They rushed to his bedside and spent the rest of the day holding his hand and talking to him. “As it neared midnight, we all just held his hand and told him to just make it until midnight for his 100th birthday.” Jerry died in his sleep a few hours later. He was 100.