Gold is tasteless: So why put it in food?

A food historian, a food writer and a chef all chime in on the trend that's been around for longer than you think. 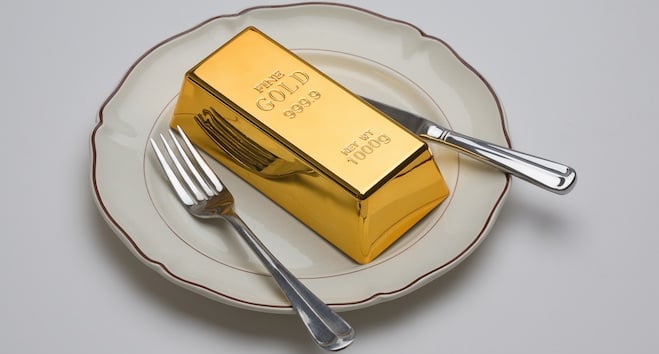 How do you like your burger? Well, you need the juicy patty, of course, and maybe some lettuce and tomatoes. Any ketchup? Some mayo? And how many gold leafs do you want it wrapped in?

Although the burger was intended to make fun of the super-rich, the owner actually received legitimate requests for it, showing the demand for high-priced grub.

The most unorthodox ingredient—edible gold—isn’t exactly a new gastronomical trend. Magic Oven, a pizzeria in Toronto, has had a 24k gold leaf-garnished pizza for $108 on their menu for several years now.

Although eating gold sounds like the ultimate in gourmet luxury, it has no taste, texture, and adds nothing to a meal other than, quite literally, a lot of glitter.

“It certainly was being used in large feasts in the Middle Ages,” says Dr. Heather Evans, a food expert and historian. “This was the period that people referred to as the Dark Ages. Among the upper class, the small percent that had loads of money, this was a really glamorous, luxurious era. They wanted their fancy stuff.”

Toronto food writer Corey Mintz finds the gold-eating trend an act of inexcusable opulence. “Eating gold is the absolute height of tastelessness,” Mintz says. “If you find yourself eating gold, just take a moment for self-reflection, you’ll see just what a callous act it is.”

But Executive chef at Toronto restaurant Aria, Eron Novalski, has a simple explanation of why restaurants use gold leaf in their food. “It’s gold. It kind of speaks for itself.”

When Aria first opened, the menu included an opera cake garnished with gold leaf. “When I studied in France, we used to use a lot of it in pastries, and it’s become a trend to augment a dish,” Novalski says. “The glistening, the flakes—it’s almost like fire.”

It’s not cheap, either. A sheet of edible gold could cost as much as $50, depending on the carats.

Unlike other expensive ingredients or garnishes—like caviar—edible gold adds nothing to a meal other than, quite literally, dollar signs. “Take something like a truffle oil,” says Mintz. “It can be wonderful with, say, an egg. In macaroni and cheese, it’s just a way to make something seem fancy or expensive.”

“The cynic in me would say it’s a little bit of a gimmick,” Evans says. Mintz adds that advertising gold in your restaurant’s dishes is sometimes more of an advertising ploy to get customers in the room, only to have them buy a $12 meal.

“Right now in times of austerity, we’re all a little hungry for that sense of luxury that many of us might feel that we have lost,” Evans says.

That sense of luxury is popping up on low-brow dishes with high-brow ingredients, like burgers or pizzas topped with $50 worth of gold. In fact, the World Record Academy even has a sub-category for most expensive foods with gold. The most expensive pizza in the world with gold is at Margo’s Pizzeria in Malta, with nearly a $400 USD price tag. The Douche Burger is the world’s most expensive gold-covered burger. “People are trying to put new twists on classic foods,” Novalski says. “Now it’s coming to gold leaf.”

Evans says that the presence of gold on low-brow, casual dishes is similar to how replications in the fashion industry work. “Just like fashion, what we see on the runway one season shows up in a reduced and much cheaper version in Walmart in another season,” she says. “People are having access to that higher end food.”

Accessible or not, eating gold is still the height of gastronomical excess. “I’m all for waste,” Mintz says. “But for most people, if it seems like something only a Bond villain would eat, you should not eat it.”