As more employers turn to clean technology, most jobs could soon be green-collar

The green jobs sector is no longer a niche 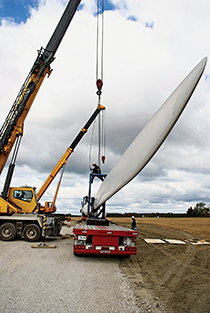 For Chris Rogers, owner of Corporate Chemicals and Equipment in St. Catharines, Ont., the wake-up call came when his father Cecil was diagnosed with lymphatic cancer in 2000. Cecil, who owned the business before Chris took over, had worked in the industry since he was 18. “He opened my eyes to what he thought was the cause,” Rogers says: the vats of chemicals that surrounded Cecil through his working life. “I started to rethink things.” The company, which makes and sells sanitation supplies, started going green—a philosophy that’s affected everything from products to marketing and, of course, its employees. “The green chemistry of today is the everyday chemistry of tomorrow,” he says. The same could be true of green jobs.

Canada’s green economy is growing fast. Our clean-technology sector, made up of more than 700 companies, saw an 11 per cent jump in employment between 2008 and 2010, according to a January report from the Pembina Institute, a non-profit environmental think tank. Once considered a niche, the green-jobs sector is now comparable to the booming oil and gas extraction sector, and has exceeded the aerospace industry, says a 2012 report from Analytica Advisors, an Ottawa-based consulting firm that specializes in clean energy.

The trend is relatively new. “When I was young, there were no environmental jobs. The closest you could get was cleaning up spills,” says Tom Heintzman, co-founder of Bullfrog Power, a green-energy provider. “The notion of the environment as an economic driver didn’t exist.” One idea pushing the green economy forward is that environmental and economic goals don’t have to be at odds with each other—that it can be good business to go green, and the two often go hand-in-hand.

The definition of environmental employment can encompass all sorts of professions, notes a 2012 ECO Canada study on the Canadian labour force and the green economy. These include jobs that demand environmental skills, such as an air-quality engineer or an architect who creates sustainable designs; and those that don’t, such as agricultural workers on organic farms. After analyzing 835 online job ads from March through May 2012, the ECO study, which focused on jobs that require environmental expertise, estimated that positions linked to the green economy account for at least one per cent of recent vacancies, probably more. “It’s grown tremendously,” Trump says. The largest number of vacancies were in environmental protection, resource conservation, renewable energy, green services and sustainable planning or urban design.

Growth in environmental jobs is unlikely to slow as the green-energy industry expands, with more investment in wind and solar power as a key driver. Oil giant Royal Dutch Shell recently predicted that solar power could become the world’s biggest source of energy in the next 50 years.

As companies place increasing emphasis on environmental practices, the skills required in the workplace are bound to change. Nearly half of job openings linked to the green economy require between five and 10 years’ work experience, the ECO Canada report notes, and the vast majority (98 per cent) demand some post-secondary education. “Two-thirds of my sales reps have a university degree, but had no concept of green until they got here,” says Rogers, who has 15 full-time employees. (Manufacturers provide ongoing training about the products they sell.) The type of worker Rogers looks for is changing: “people who are open-minded, who have the ability to self-educate. That’s a big thing.”

Corporate Chemicals traces its roots back to the 1930s, when Maurice Rogers, Chris’s grandfather, sold sanitation supplies. “Niagara was, up until the early 2000s, a very industrial area. For us as a company, that was a key focus,” says Rogers, who took the company reins from his father in 2005. (Cecil has been cancer-free for 11 years.) The region’s shift toward a greener economy is reflected in changes at Corporate Chemicals and countless other local businesses. If Rogers and others are right, more will come on board, and as the green economy continues to grow, green jobs will follow.