Have we reached peak pumpkin spice?

The pumpkin-spice backlash has spawned its own bona fide cultural industry. Is it too much of a gourd thing? 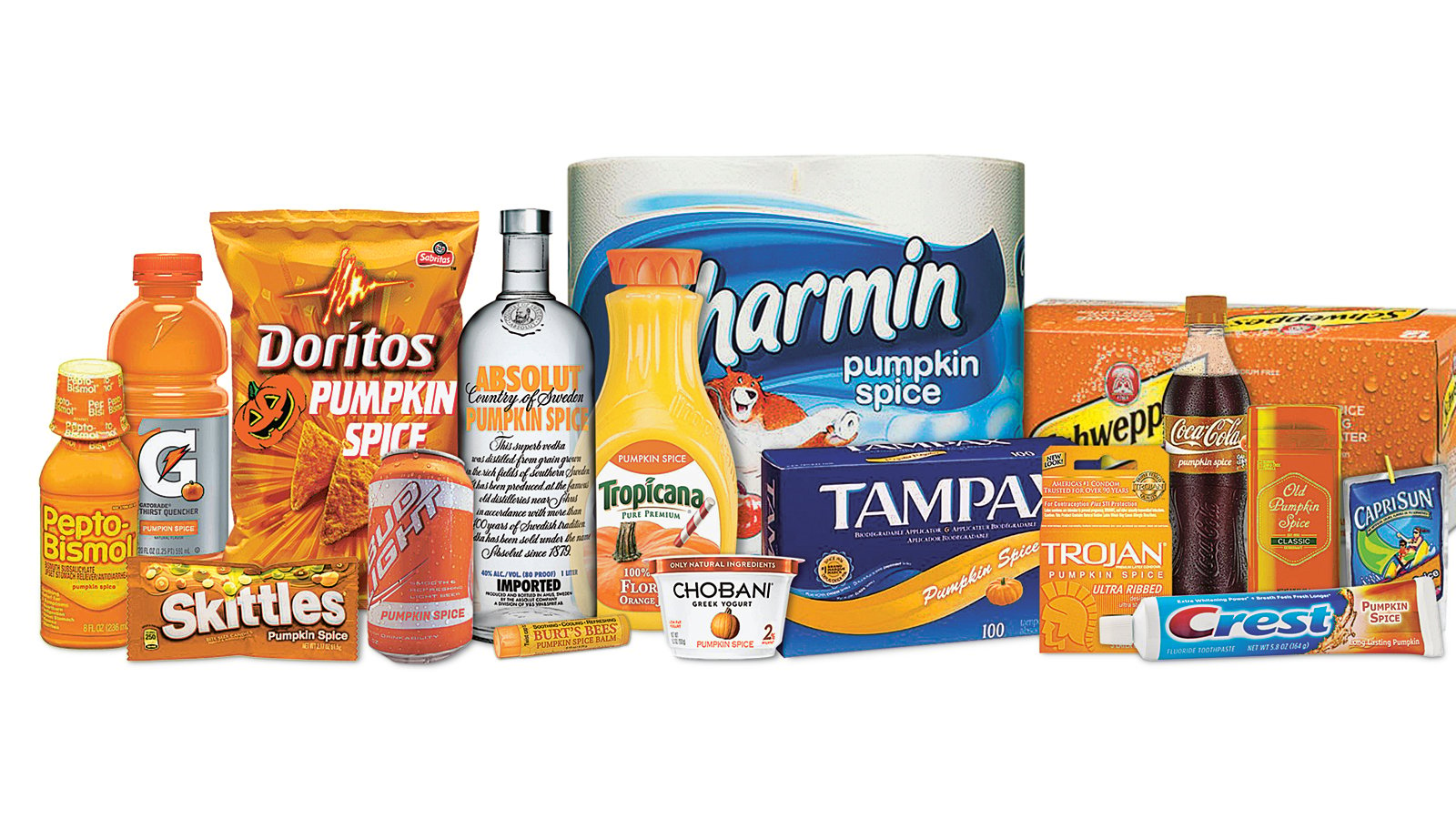 A photo illustration, of course! Orange you glad? Pumpkin-spice-flavoured Skittles, vodka, toothpaste, toilet paper and condoms do not exist—at least, not yet. (Jen Lewis/Connor Toole/Photo illustration by Sarah MacKinnon)

Just over a decade ago, a Starbucks barista pumped the first squirt of pumpkin-flavoured syrup into a cup of coffee, topped it with steaming milk and a dollop of whipped cream. And, with that, the coffee giant birthed not only a product, the pumpkin-spice latte—or “#PSL,” as Twitter calls it—but also a commercial and cultural force. Its market effect has been evident for a few years: The chain’s rivals have their own spins on the creation: Tim Hortons has a pumpkin-pie latte; Second Cup a version of the original. The flavour du jour has branched out into a fleet of products: pumpkin-spice hummus, Oreos, M&Ms, Pringles, even Purina dog treats.

The PSL is synonymous with fall. “People wait for it; they expect it,” says Vanda Provato, vice-president of marketing at Second Cup. “We got calls in early August with customers asking when it’s going to arrive.” No surprise, then, that all three chains released their beverages earlier than usual this year.

But, perhaps in part because of its ubiquity, the flavour superstar has of late also morphed into a social-media punch line. “I think more girls would try cocaine if there was a pumpkin-spice option,” read one recent tweet. “White folks were gasping so loudly, I assumed there was a pumpkin-spice latte shortage, but no, it’s about Real Housewives,” read another. Many of the jabs subtly play on ethnoracial and gender lines, with one tweeter declaring last week: “I’m going to be Pumpkin Spice for Halloween, because I want to know what it’s like to have hot white girls like you.”

In fact, the backlash has turned into its own cultural industry. A Daily Show writer’s visual gag—a photoshopped box of “pumpkin-spice-flavoured” Tampax—went viral. And on Mashable last week, Saturday Night Live’s Jay Pharoah did a segment where he read people’s pumpkin-spice latte tweets. Music writer Paul Myers’s joke about Pumpkin Spice as “the sixth Spice Girl” happens to be a costume you can buy from Wal-Mart. Ashley Harris, 19, a film student in Toronto, and three of her friends plan to dress as pumpkin-spice lattes for Halloween; their version combines coffee-cup dresses with Ugg boots.

But why pumpkin spice? Limited-offer vodka, coffee pods and candy-cane-flavoured hot chocolate are just as guilty of seasonal faddishness. Calgary graphic designer Alyssa Polnick, 27, blames the Instagram frenzy. “When Starbucks released its first pumpkin-spice lattes, everybody started taking a picture of the ‘PSL’ label on their cups and posting it,” she recounts. This was two years ago, when Polnick posted her first PSL. Then she noticed the Instagram feeds “blowing up with pictures of twentysomething women and their lattes.” She laughs, “I wasn’t unique.”

Pumpkin spice may be a victim of its success, but also of its emptiness. It strips a seasonal symbol of any cultural history, distilling it into a syrup we can guzzle. In fact, it even strips it of pumpkin: The first wave of backlash this summer was against the revelation that there is—horrors—no actual pumpkin in pumpkin spice.

But ultimately, this is a friendly meme of the “stuff white people like” variety. Daniel Levine, a trend expert and head of the New York-based Avant-Guide Institute, says making fun of pumpkin spice and the people who drink it is akin to the harmless stereotype of white people dancing. It’s good-natured and not too politically incorrect. There’s also just something fun about a collective consciousness where everyone gets to be in on the joke.

Tim Hortons is certainly laughing through it. Its pumpkin-spice doughnut has almost sold out nationwide. “Guests love our pumpkin products, so if they’re joking about it, I look at it as lighthearted and just fun,” says Tammy Martin, VP of food and merchandise. And the PSL is still Starbucks’s top-selling seasonal beverage, the only one with its own Twitter handle, and 94,000 followers.

As for the candy-cane-latte argument, Levine submits that people make fun of Christmas clichés, too. He points to the “ugly Christmas sweater” trend where people try to outdo each other with the most outlandish garment. “Maybe we’re right to start a new meme with candy-cane lattes. There’s an opening there.”