Indigenous women in remote parts of the country have to travel hundreds of kilometres to give birth. A growing revival of midwifery in communities is changing that 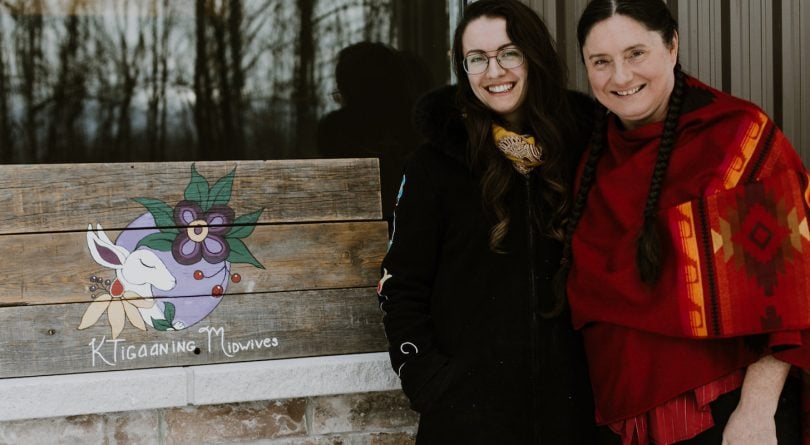 Being pregnant is hard enough. Being pregnant and having to travel hundreds, sometimes thousands, of kilometres to give birth — often without your spouse, family or friends for support — makes what can already be a scary experience even harder.

For many Indigenous women, however, that’s the reality of childbirth. For decades, many healthy, low-risk Indigenous pregnant people have been forced to leave their community weeks in advance of their delivery to a hospital to give birth in hospitals far from home.

Historically, there have always been midwives in Indigenous communities but, as with many traditions, those practices were affected by colonization. In the late 19th century, the Canadian government began evacuating Indigenous women from their home communities to give birth in federally-operated hospitals, as part of a broader campaign of forced assimilation. Still today many rural and remote parts of the country, particularly in the North, lack obstetric and prenatal care services, meaning each year, an estimated 40,000 Canadian women must travel from their home communities to have a hospital birth. This separation from their families can lead to damaging negative outcomes for new mothers and babies — stress, prematurity, birth complications, and a lack of continuity in post-natal care — as well as a sense of disconnection from their families.

In recent years, there has been a growing revival in Indigenous midwifery with the development of Indigenous birthing centres. Practitioners are combining contemporary medicine with traditional birthing practices, enabling more women to give birth closer to home. These efforts have been backed by funding for research in pre- and post-natal care, as well as a national call from the Truth and Reconciliation Commission to address infant mortality and maternal health in Indigenous communities.

By enabling women to give birth closer to home, Indigenous midwives can follow women throughout their pregnancy, attend their birth and then support them for up to six weeks post-partum. Equally important, they have cultural fluency that enables them to better support their clients. Indigenous midwifery is recognized as not only a way to improve women and infant health, but to reverse many of the disparities that affect Indigenous populations.

An understanding of traditional practices is often lacking in mainstream medical care, says Rachel Dennis, a midwife from Nipissing First Nations, who owns K’Tigaaning Midwives in North Bay, Ont. with her mother Carol Couchie. “We make sure people who want to incorporate culturally appropriate practices or traditions aren’t looked at sideways,” she says. “We understand those things that are helpful to their mental health and feeling like part of a community.”

In some cases, standard hospital regulations prevent women from incorporating ceremonies and practices into the birthing process, like including family members or burning herbs in order to smudge, says Dennis. “The most common question I get is, ‘Can we smudge in here or is the fire alarm going to go off?’” she says. “Someone doesn’t need to explain to me what smudging is. We understand if they want community in the room when they give birth. Or that they may want a grandparent present, so when the baby is born, they can whisper words in their language so that’s the first word the baby hears.” Dennis adds that celebrating birth according to traditional practices is not just comforting to mothers, it’s a benefit to whole communities — it “helps us heal as a people.”

Reclaiming childbirth can also be a way to restore balance to communities. In a 2017 interview with Today’s Parent, Gilbert Fredette, a councillor for Norway House Cree Nation in northern Manitoba said that it’s important for childbirth to happen within First Nations communities: “the balance is not there anymore. We’re seeing people passing on and we honour them with funerals here, but we’re not celebrating birth. That should be a joy in our community.”

“It doesn’t always necessarily take an Indigenous midwife to do that, of course,” says Dennis. “We work with a lot of allied midwives or allied healthcare professionals, but to have clients know that we are here and we are putting their priorities first is important to any person, especially someone who’s been affected by colonization.”

Heather Heinrichs is a Métis midwife from Winnipeg who works in Hay River, N.W.T. She’s not from the area and her traditions aren’t the same as all her clients, but she works with her clients to ensure she knows what they want included during the birth. “There are a lot of similar traditions and teachings between cultures, especially when you’re looking at North America,” she says. “Even if I’m not sharing them, I know those teachings are there, and it’s important to promote them and respect it.”

Before the arrival of European settlers, birth in many First Nations, Métis and Inuit communities was a time for sharing and reinforcing sacred knowledge of birth, and for strengthening social relationships and ties to the land. Community births brought together midwives, elders, men, fathers and extended family to help. In Dene tradition, for example, mothers would stay in a shelter with their baby for a recovery period after the birth, being looked after by a midwife and older women, Heinrichs says.

Midwives who can support traditions, alongside providing good prenatal care, and helping families make informed choices about where to have their babies, can improve outcomes, Heinrichs says. “You see reduced rates of preterm labour, people have healthier pregnancies, and a better experience overall that lasts into their life.”

A negative birth experience can have long-term effects. Research has shown that many mental health issues (such as addiction and suicide) have roots in abandonment or separation from family and culture. Birth outcomes among First Nations, Inuit and Métis people are consistently less favourable than non-Indigenous population, according to a 2017 report from Statistics Canada. The report pointed to factors such as limited access to pre- and post-natal care and a lack of local birthing opportunities.

First Nations communities in general have raised the issue of inadequate healthcare funding and resources before. Last February, a group of doctors wrote a letter to The Globe and Mail, supporting Nishnawbe Aski Nation’s declaration of a public health emergency in Indigenous communities. Among the examples they cited were nursing stations lacking basic medications and equipment, like oxygen and defibrillators. Métis midwife Heather Heinrichs with one of the babies at their six-week appointment in Hay River, N.W.T. Photo, Sarah Poitras.

Bringing birth back to communities is one way to address this disparity and inequality of healthcare, as well as heal the trauma of colonization, says Kanahus Manuel, a member of the Neskonlith Indian Band of Secwepemc Nation in British Columbia. In a recent interview with Rewire News about reclaiming traditional indigenous birth practices, Manuel said, “Birth is the ultimate act of decolonization and resistance.”

When you have midwives who are providing good prenatal care, making recommendations whether they can stay in town or if they are high-risk so they are making informed choices about where to have their babies — you improve outcomes, says Heinrichs. “You see reduced rates of preterm labour, people have healthier pregnancies, and a better experience overall that lasts into their life.”

The evacuation of pregnant Indigenous mothers to give birth in federally-operated hospitals stems back to the late-19th century, as a method of assimilating First Nations people, writes Aboriginal midwife Karen Lawford in a paper for the Institute for Women’s Studies. Birthing in the community helped strengthen relationships and connectedness as Aboriginal midwives, Elders, men, family members and extended family members all played a role in helping the labour and birth, Lawford writes. The evacuation policy did not result in good health outcomes and helped further “marginalize First Nations’ birthing practices and coerce First Nations into accepting the Euro-Canadian bio-medical model.”

Indigenous midwifery benefits communities outsides of rural and remote areas, too, particularly when it comes to advocating for parents who experience racism and discrimination. In many urban areas, Dennis says, indigenous parents are often judged about their capabilities by healthcare providers. That, in turn, can make parents wary of asking questions or seeking support because they fear they might be perceived as being unfit and have their children taken away from them.

Indigenous midwives also act as resource for more complicated pregnancies that require evacuation and hospitalization. “We work really well with the doctors when a pregnancy becomes too high-risk,” Dennis says. She can relay her client’s medical history and be a long-distance advocate in her care. So even if a woman has to be far from home, she won’t feel alone.

A healthy pregnancy and birthing experience is about feeling supported by your community, knowing what is healthy, and feeling in charge and making decisions on your own terms, Heinrichs says. “When that ability is taken away, it can create a lot of trauma around the birth experience. You should be able to decide if you want your partner, mom, auntie, or grandma there in the room with. Or maybe you want to be by yourself. To be able to make those decisions and facilitate an experience that feels empowering is important to forging a solid bond with the baby.”