The fatter you are, the fuzzier your thinking

For decades, people who struggled with their weight were told it was a lack of willpower that stopped them from controlling their appetites. But new research suggests a shortage of brainpower might be an even bigger problem. A flabby body, it seems, can lead to a flabby mind.

“When you get unhealthy, what happens is that areas of your brain get less efficient,” says Tim Verstynen, director of the cognitive axon lab at Carnegie Mellon University in Pittsburgh. “Usually it’s around how you make a decision and how you get a reward.”

In fact, it’s possible that obese people are caught in a feedback loop, with their unhealthy choices making them less likely to steer away from fattening foods or unnecessary snacks.

The brain is the body’s undisputed energy hog, weighing in at less than 1.5 kg, yet gobbling up 20 per cent of our oxygen supply, 25 per cent of the glucose and 15 per cent of all blood flow. Not surprising, given that something as simple as choosing a breakfast cereal requires a kind of high-level, executive communication that engages multiple areas of the mind. In his own research, Verstynen, a psychologist, has been looking at how that “cross-talk” travels across white matter, the brain’s connective network, by taking scans of water levels in nerve fibres called axons. Correlating those images with the subject’s body-mass index, he and his team have concluded that the bigger the gut, the less going on upstairs.

“As you become more and more obese, particularly around the midriff, the white-matter signal goes down,” Verstynen explains. It’s a reduction, he postulates, that is due to a chronic inflammation of the myelin, a sheath that insulates our brain’s wiring.

It’s not yet fully clear how such signal disruptions affect the obese, but some recent studies suggest there’s a measurable drop-off in cognitive abilities as weight goes up. Last summer, French and British researchers published a paper in Neurology reporting the result of a project that tracked the health of 6,400 people over a decade, and had the participants, aged between 35 and 55, do memory and other brain tests three times. What they found is that people who were obese and showed other metabolic changes, such as high cholesterol, blood sugar or blood pressure, showed a 22.5 per cent faster decline in their test scores than those with normal weight and good health.

And last fall, at an international neurology conference, Verstynen presented preliminary findings from a still-unpublished project in which he and his colleagues monitored the brain activity of 29 adults. Participants were shown the names of colours on a screen and asked to identify the shade they were printed in, rather than the colour they referred to (e.g., the word red, printed in blue). Functional magnetic-resonance imaging revealed that subjects with a high body-mass index showed more brain activity than leaner participants, suggesting they had to work harder to come up with the right answer.

Verstynen likens such reductions in cognitive function to the fogginess one feels after a late night, rather than some precipitous drop in intelligence. But even such a small change could have big consequences, especially if it complicates the decision-making process or impairs impulse control.

Still, such changes would only partially explain the role the brain plays in obesity. For scientists are really sure of only one thing: Eating is at once our simplest urge and our most complex process. Blood sugar, energy levels, hormones, daily rhythms and even our evolutionary past all play a part in stimulating and suppressing our appetites. (One hypothesis, first put forth 50 years ago, suggests excessive weight gains can in part be explained by a reward system that’s still geared to hunter-gatherers. The brain places a premium on high-calorie foods, storing up for lean times that never come in prosperous nations.)

Complex body systems that track energy and satiety levels are constantly providing peripheral signals to the brain about our fuel needs. Much of the monitoring occurs in the hypothalamus, a primitive, almond-sized area we share with all vertebrates. Sitting directly above the brain stem, it synthesizes and secretes neurohormones that, in turn, control a large variety of functions and behaviours, including sleep, thirst, hunger, body temperature, heart rate and the fight-or-flight response.

Then there are higher brain centres—the insula, amygdala, striatum and orbitfrontal cortex—associated with stimuli, emotions, rewards and memory, which also add pieces to the eating puzzle. Alain Dagher, a neurologist and researcher at the Montreal Neurological Institute, has been studying the effects that ghrelin, a hormone produced by the stomach, has on hunger. Secreted when the gut is empty, it makes the sight of food more appealing. In a 2009 study, Dagher and his team administered ghrelin intravenously, then showed pictures of foods to subjects as they sat in a scanner. They found a significant uptick in activity in the primary and secondary visual cortices compared with those who hadn’t been given the hormone. “It seems to change the motivational value of pictures,” he explains, “and affect our decision-making as we evaluate . . . food options.”

Dagher is among those who are convinced that the body’s age-old circuitry remains wired for calories, rather than taste or healthfulness, a belief that is buttressed by a growing number of studies suggesting that the popularity of fast food is directly tied to how it stimulates our brains. In a paper published this spring, researchers from three U.S. institutions described what happened when they placed 30 teenagers in MRI machines and showed them TV shows and commercials. Food ads for brands such as McDonald’s and Cheerios caused greater activation of brain areas associated with attention, reward and taste than non-food ads for things such as cars, telephones and insurance. And afterward, the teens demonstrated better recall and higher opinions of the food commercials than the non-food ones.

A similar study of younger children, published in the Journal of Pediatrics last fall, looked at the effects of corporate logos on brain activity. All subjects showed more action in reward centres when exposed to fast-food brands. The obese children also showed higher levels of activity in their cognitive-control areas than children of healthy weights, suggesting they might be more vulnerable to such advertising. Dagher suspects such findings simply confirm what fast-food companies have known for years. “All they have to do is get you to try it, and then the body remembers,” he says.

With obesity now a global epidemic—the World Health Organization estimates there are more than 300 million people who meet the medical criteria, and a further 700 million who can be classified as overweight—the question becomes how to best work around our brains. Diets are clearly hit and miss. Dagher notes that ghrelin levels actually spike when people try to starve themselves, or are experiencing stress, while a forthcoming British study, previewed last fall, seems to show skipping a meal increases the brain’s desire for high-calorie foods.

And our understanding of the intricate, interlinked processes that affect our appetites is still too limited to offer much hope of a pharmacological breakthrough. Rimonabant, a promising anti-obesity drug that blocked a hunger-controlling cannabinoid receptor in the brain, was pulled from the market in 2009 after it was found to provoke severe depression and suicidal thoughts.

One potential path was unveiled in April by researchers at the University of East Anglia in Norwich, England, who published a paper outlining their discovery of stem cells that generate appetite-adjusting neurons. These tanacytes are found on the floor of the third ventricle, one of four connected, fluid-filled cavities within the brain. Mohammad Hajihosseini and his colleagues proved the cells were reproducing and migrating to neighbouring regions, by injecting dye into the brains of mice and tracing its progression.

It’s an important breakthrough because scientists previously believed humans were born with a set number of appetite neurons. And if they malfunctioned or died—one of the suspected root causes of eating-related disorders—the damage was permanent. “It means that these circuits aren’t set for life, like most of the other areas of the brain. They’re malleable,” says Hajihosseini. “And we now have a mechanism to replace them if we wanted to.”

Eventually. There’s still the question of whether these neurons turn the appetite on or off, as well as which genes regulate their biology and make them divide—and at what age, and for what reasons, humans stop naturally producing them. There are five or 10 years, the lead researcher estimates, of heavy scientific lifting before we can talk about interventions.

A more direct way to combat the obesity epidemic is to cut off the foods that are feeding it—calorie-rich, low-nutrition snacks, sugary drinks and mind-blowing fast-food innovations. (Pizza Hut now offers cheeseburger-stuffed crusts at its Middle East locations and hot-dog-stuffed ones in the U.K.) “It’s going to take new public policy to change things,” says Montreal’s Dagher, “just as we saw with the tobacco industry 10 or 20 years ago.”

The mystery of how the brain controls—or diverts—our appetites will probably take longer to unravel. As Tim Verstynen points out, it was only a decade ago that researchers began to suspect there was a link between obesity and reduced cognition. It’s too soon to even say whether differences in the brain cause obesity, or obesity causes changes in the brain. (It’s likely both.) “We’re just at the beginning of this,” he says. “We’re still trying to figure out what questions to ask.” 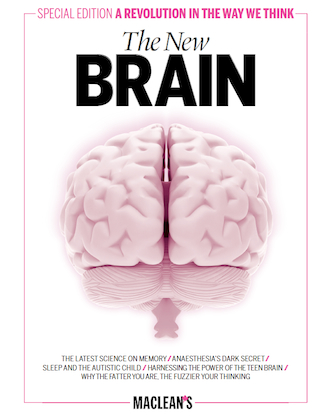 In The New Brain, Maclean’s presents some of the most intriguing science about the most complex organ of the body.

Researchers still don’t completely understand how we sort, store, and interpret a mind-boggling amount of information with three pounds of tissue the consistency of soft tofu. From Alzheimer’s and autism to anesthesia and ADHD, The New Brain is the definitive guide to some of the world’s biggest brain mysteries.

Available on newsstands now. The eBook is available on Apple, Kobo and Amazon. You can also find it in the Rogers eStore as a PDF ebook  or print edition.