How to survive the worst bugs ever

We went to the centre of Canada. No human had ever made the trip, but countless bugs were right at home. 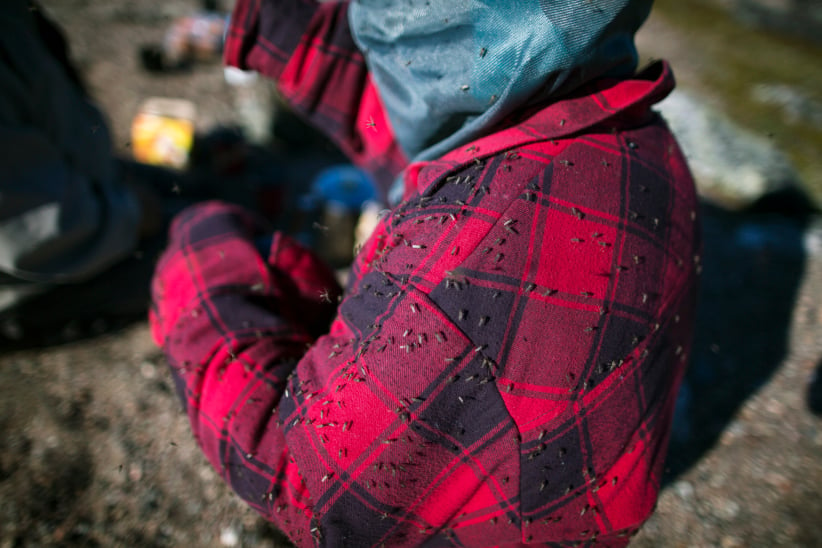 Mosquitoes sit on the jacket of Megan Campbell near the geographic centre of Canada. (Photograph by Nick Iwanyshyn)

“Insect harassment” is a plight of the Arctic, the surprising summertime home of the world’s worst mosquitoes. Twenty-five species of them breed in the tundra, where pools of still water serve as incubators after the ice melts each year. Finding few mammals, the winged demons mercilessly harass the victims they do find. Caribou herds actually dwindle when the bugs distract them from eating or migrating, and caribou fawn, drained of blood, endure death by mosquito.

As a mammal from Toronto, I was unprepared for a journey to Baker Lake, Nunavut, in July, on an assignment to find the geographic centre of Canada. The mosquitoes didn’t just eat me; I also ate mosquitoes, swallowing them with each swig of water and spoonful of Kraft Dinner. They harassed me in blizzards, puncturing my skin as rapidly as a tattoo needle along my arms, legs, earlobes, eyebrows, eyelids. I lived to tell you these tips.

Bug spray is futile. An odour of DEET is a mere inconvenience for a female mosquito on her life’s mission to procreate, and she needs three-millionths of a litre of your blood to produce eggs. Instead, you must arm your body with raingear. Goretex, real or faux, is impenetrable to a mosquito’s syringe, the proboscis, which tries to slip into your blood vessels. Tighten the Velcro at your wrists until cutting off circulation, so nothing invades your sleeves. Drape a bug jacket overtop, and seal the netting over your fingers so you no longer have hands but paws. Zip your raincoat to your cheekbones; bungee up its hood, and veil your face with the bug jacket, leaving nothing but two eyeballs exposed. Don’t blink.

Ankles will be the flaw in your fortress. Your sweaty Achilles tendons, close to the safety of the ground, attract mosquitoes that no ski socks or skinny jeans can keep out. Apply AfterBite before the bites, coating your ankles to delay the itchiness that will seize this inaccessible location. Don’t clip your fingernails.

Your deepest weakness, women especially, will be your bladder. Before taking a sip of any liquid, consider the sacrifice to come. When you need to pee, you’ll find one use for bug repellant. Spray it down the back of your pants. It won’t deter mosquitoes when you squat and reveal untouched territory, but the precaution might help your state of mind.

Despite your efforts, mosquitoes will drown in your beer, swim up your nostrils and swarm you like fruit flies on an overripe banana. Niche packing items should include a Camelbak so you can drink through a tube, and a nose plug. As bugs cling to you, smack each part of your body by doing the mosquito Macarena—arm, arm, hip, hip, head. Hey Macarena! For your itchiest bites, use a fingernail to slit open the skin and drip AfterBite into the open wound. Feel the burn.

Mosquitoes will also infest your scalp, so run your fingers through your hair before bed. If you’re sleeping in a tent, peg it tightly, for the insects will hide in any sagging crevice. After going to the bathroom, prepare to enter the tent. Crack open one corner of the door and army-crawl inside with a “go-go-go!”

Seal the tent rapidly, and take attendance. For each intruder mosquito, hone in with your flashlight, mesmerizing it with the brightness, and squish it with the light. Flick off the victim and repeat until the intruders appear to be eliminated. Some will still be hiding, so put in earplugs to silence the buzz. Mosquitoes will hover around your face because they’re attracted to carbon dioxide, so try to stop breathing.

When you wake up the next morning with blotches across your skin, ravenously itchy, remind yourself that mosquitoes, culicidae, are an important part of the ecosystem. Along the water, when you spot little bubbles of mosquito larvae, or perhaps that of black flies, which grace the world in August, pause to remember that the eggs provide food for fish, which in turn feed birds and mammals, on which humans and planet Earth depend. Pause to appreciate these larvae, then drown them.