In the kitchen with Nigella Lawson

'You see the thing is food is not to be left to the experts, because we all eat' 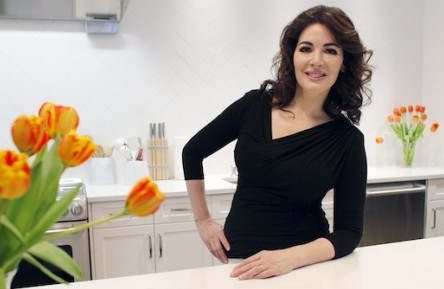 Bestselling author and TV personality Nigella Lawson visited the new Chatelaine test kitchen powered by GE this morning to talk about her new book, Nigellissima, a collection of 126 Italian-inspired recipes. We had a chance to speak with Lawson about food writing, the pressures of a non-Italian tackling Italian recipes and the virtues of vermouth. 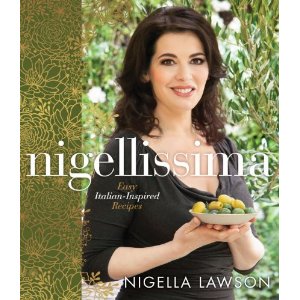 A: I will, and do you know what I love most of all? Seeing a really old, used, beloved copy. It always warms my heart.

Q: This book is actually the way I came at the discourse of food writing 16 years ago, and via you I was introduced to other food writers, namely Elizabeth David and Anne del Conte and so on. So I’m curious to know how you arrived to the subject.

A: Completely by mistake. It was a long time ago so I was relatively young and I always thought that I wanted to write a novel. And then one day my late husband John said to me, ‘You think everyone is as confident in their attitudes towards food as you are–you should write about it.’ This [How To Eat] isn’t really a recipe book–there are lots of recipes in it–but it’s a different sort of book. It’s about talking about food and why it matters. So I spoke to my agent and asked what he thought and he said let’s do it. And I said, ‘I don’t really know if I want to do a food book.’ And he said, ‘Before you write a great symphony just do a few chords. This will be it.’ Of course I wrote this book and realized I didn’t want to be a novelist. I’m not a novelist. I felt I found my voice through food. So it was just an accident. At the time I was journalist–not even a food journalist; I’d write about anything–but you see the thing is food is not to be left to the experts because we all eat. We eat everyday and food is such an important part of our lives, not just in terms of giving us all sustenance but emotionally it explains so much about us. So  I wanted to write about food in its context–sometimes historically and sometimes I suppose sociological, and sometimes just purely personal. So for me it’s just the biggest subject in the world and I love every aspect of it. 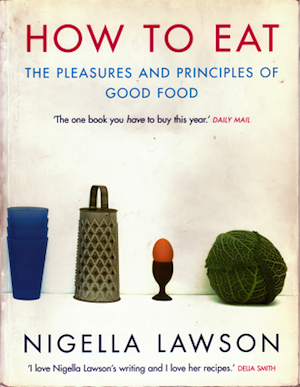 Q: Were there food writers that you were reading while you were a journalist?

A: Well, I’ve read many of them. Actually I was quite lucky because there were two books that I think have something in common with [How To Eat] written before it, that had I come across them when I had started off, I wouldn’t have written this. I discovered them halfway through writing it. One of them is an Australian book called the Cook’s Companion by Stephanie Alexander, which is fantastic; she lists ingredients and the margins are filled with what else goes with each recipe. And by some curious thing, I [did the same in How To Eat]. So if I’d seen that, it would have put me off. We’re friends now; I’m such an admirer. The other is a novelist and short story writer who very, very tragically died young, called Laurie Colwyn who wrote Home Cooking, which is in a way quite like How To Eat, although it’s a smaller book. It’s really more just essays that have recipes written into the narrative and that also influenced me. But it really is very beautiful and I feel that had I discovered it before I would have thought, ‘Oh I can’t do it because that’s so perfect.’ So I suppose we all have to find our own way and we can only write in our own voice, in the same way that we cook: it’s all personal.

Q: That leads me to Nigellissima: there are so many things that you do in your books out of habit rather than logic. There’s a recipe where you peel your zucchini so that it’s striped. One doesn’t need to do that but you do it because your mother did. Would you reckon that things we do in the kitchen can almost form mini-biographies of us?

Q: Nigellissima is a collection of Italian-inspired recipes. Now, you certainly don’t need me to tell you that Italians can be famous–if not infamous–for their adherence to tradition and authenticity when it comes to food, which is a wonderful thing because when you think about a southern Italian pasta that calls for bread crumbs instead of Parmigiano out of necessity [because cheese was expensive] surviving the passage of time, that’s a beautiful thing. But food also needs to evolve. I guess what I’m curious about is, were you conscious of this when you were writing these recipes–the idea of adhering to tradition but at the same time, moving forward?

A: I think ‘forward’ is not what I would say. I would say that authentic is a big, big buzz word in cooking. However to be authentic, for me, I have to cook as an English woman who loves Italian food because otherwise it would be deceptive because I will never be Italian–much as I try! So I wanted to discuss how Italian food has influenced me and I wanted to bring it to the food that I cook. Now interestingly, this was translated into Italian and it came out in Italy last fall. And I dare say, I was frightened, but they actually came to me and said, ‘You know, it’s quite liberated us because we are so bound by tradition we can’t make those changes, but if you do then maybe we can play.’ And Italians are so regional–someone from Tuscany is not going to cook like someone does from Sardinia–however, they’re very interested to know how we cook in other parts of the world because the world has changed–we’ve got Internet, television. Mario Batali, the Italian-American chef says [my style of cooking is] Londonese. So it’s that way of treating where I come from as another region of Italy. I think I’ve always been really careful to say when [recipes are] not authentically Italian. And yet some recipes are very authentically Italian to the extent that when on vacation in Italy I go into their kitchens and rummage about and find their old hand-written cookbooks and I take those recipes. So some are totally, authentically Italian and some are authentically mine; a mixture of English and of all the travels I’ve made.

And also more ingredients are available today. For example, when Italian food was cooked in Italy originally–and you have to remember there really is no Italian food because it is so regional, and Italy has only been in existence since the 1860s–there was no room for outside ingredients. But when I was last in Italy I saw avocado in the markets. You never used to have that. Now, I would be very sad if Italy lost its traditions–and I don’t think that will happen–but on the other hand, they are very forward-thinking people. I mean now, muffins is a word they will use in Italian Ah, si, i muffin! And they love baking. In England, we are so lazy and we have instant Royal icing powder and I’m forever sending it to my friends in Italy so they can ice their cupcakes. And of course whatever is foreign seems exotic. So for example, my Italian friends always ask me to please, please please bring cheddar! Because as whereas we would never put cheddar on a pizza because we’d think it was inauthentic, they think, ‘But goodness me, why wouldn’t you?’ They say it melts and it has such great taste! I think you can take inspiration from a country without adhering rigidly to every single recipe that might be done in that particular place. And as we know as well, there really is no such thing as one recipe. You can take a pasta dish in Italy and go to six different houses and every single person would cook it differently. Recipes are like language. And language evolves.

A: Well, maybe we need to talk about it privately. No, I’ll tell you what it is. First, do you always have an open bottle of wine on the go?

A: Well, I don’t. And I’m not being judgemental; all it is, is that I eat so much if I drank as much as I ate I’m afraid this floor would need extra strengthening. So this is the reality. When I see a recipe that says a quarter of a cup of wine, or a splash of wine, I don’t want to open a bottle especially for it. Vemouth is cheaper than wine and it has a screw top and you can keep it in your cupboard forever. So whenever I need to cook a recipe that calls for wine, I just substitute vermouth. You’re perfectly welcome to carry on using wine but where this comes in particularly useful is with red wine became it takes a long time to cook out–it has that slightly metallic taste when cooking –even good red wine needs a while, whereas vermouth is mellowed and already cooked: you can just use a splash and it doesn’t have to cook for a long time. And because I’m always cooking in a hurry, I find it useful.

Q: And it lasts longer–you just stick it in the fridge?

A: Well, you’re lucky you asked.

Q: I feel so much better, and I feel confident moving forward. And thank you  for taking the time to chat.

A: Good. And my pleasure; I could carry on forever.

Q: Well, so could I, but…wait. Can I just ask one more quick one? In How To Eat you wrote that your favourite recipe to eat alone was linguine with clams. Is that still the case?

A: Well I still love it, but ‘favourite’ is difficult. It’s really hard, you know, because I really love to eat everything I write about. But I made an absolute rule when I did Nigellissima–there are Italian recipes throughout all my books because it’s played such an important part of my life–but I wanted to make sure I didn’t repeat recipes in here. I wanted to give people news recipes–especially now because times are quite hard and I didn’t want to make people buy a book when they’ve got the recipe in another book–and because the Internet exists, people can look up my old recipes on my website. So I wanted to show some new recipes. I would say that right now, my new favourite recipe I cook all the time is the pasta with zucchini because you need three ingredients, it’s really delicious and you probably have the ingredients at home. But I still love linguine with clams, just like I still love spaghetti carbonara. I don’t stop loving recipes I’ve written about before. But I’m an enthusiast, so I’m always happy to add to them. 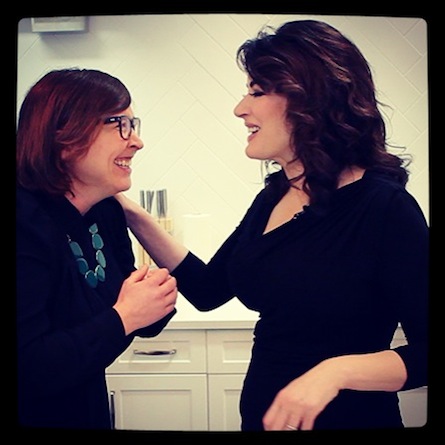 *I forgot to get my book signed. On the bright side, she told me my snort was ‘engaging’, which is the first time I’ve ever heard that. Also, it is the last time I will hear that.