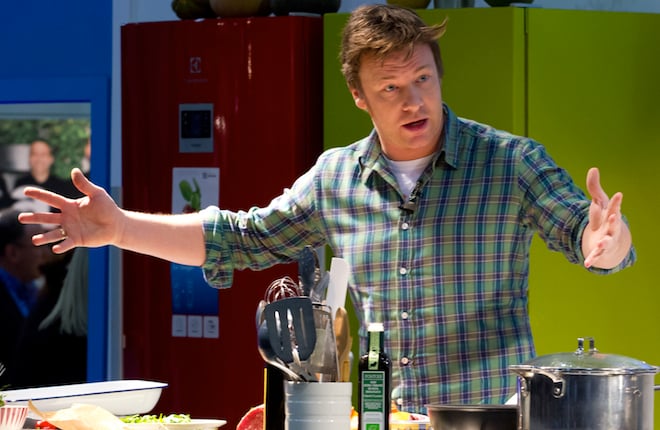 Jamie Oliver isn’t on a budget, but he wants to help those who are. His new TV show has a focus on diminishing food waste, while his new book talks about shopping smart for groceries.

The two biggest obstacles preventing poor people from eating well are, according to the celebrity chef, “access and knowledge.” He says access to fresh food can be very difficult for some communities while many people unfortunately don’t know how to cook.

“It should be illegal in First World countries to not make it compulsory for every child to be to walk out knowing how to cook,” Oliver said in Toronto earlier this week, where he was promoting a new book and TV show (Save with Jamie), as well as his partnership with the grocery chain, Sobeys. “Because we know the path of what happens with social care and young parents and how hard it is.”

Beloved by his fans, the “Naked Chef”—who gave himself that moniker to reflect his belief in easy, uncomplicated food—is never one shy from voicing his opinion. He stirred up controversy a few months ago in England with his comments in the Radio Times, saying: “The fascinating thing for me is that seven times out of 10, the poorest families in this country choose the most expensive way to hydrate and feed their families. The ready meals, the convenience foods.” He talked about meeting poor Sicilian street cleaners who make the best pasta using relatively few ingredients.

In Toronto, Oliver didn’t shy away from addressing the furor set off by his comments. “If you can cook and if food is important to you, you know that class or wealth is not a measure of how well your family eats,” he said.

But there is a point where people simply don’t have the money to buy food, according to Valerie Tarasuk, a professor of nutritional science at the University of Toronto. “Many people could benefit from having more cooking skills or more nutrition knowledge, but that isn’t the privilege of the poor in Canada,” she says. They have to afford food in the first place to be able to cook it. “And it doesn’t matter if they’re really clever and stretch a dollar.”

A 2011 study co-authored by Tarasuk found close to one in eight households dealing with problems surrounding food insecurity. This amounted to 1.6 million homes, where everyone under the roof didn’t always have access to enough safe, nutritious food for a healthy lifestyle. And while Nunavut was the hardest hit part of Canada, where more than 36 per cent of households dealt with food insecurity, the same study found that Ontario, Quebec, Alberta and B.C. also didn’t have their bellies full: 85 per cent of Canada’s food insecure population could be found in those four provinces.

Even in Oliver’s native England, more and more people are relying on food banks to get through the day, though there has been a silver lining in the resurgence of farmers’ markets.

“The recession at the moment is throwing up some really unusual quirky oddities,” Oliver says. “There’s a rise of the artisan fishmongers, butchers and people making jam. Craft is through the roof. Cheese has never been in better shape.

“Where the stuff needs to be sorted out is in industrial farming and mass production.”

It’s to help address this that Oliver says he’s teaming up with Sobeys. He wants to bring better ingredients to grocery shelves, and he isn’t afraid to address the oddity of supporting a company that sells the ready-made foods he lobbies against.

“I genuinely and 100 per cent swear the reason that I’m working with Sobeys isn’t because it’s a cute job and I get a bundle load of cash,” he says. “Yes, of course, they’re still going to sell Coca-Cola because you want to go and buy your Coca-Cola, but how can you readdress that balance?”