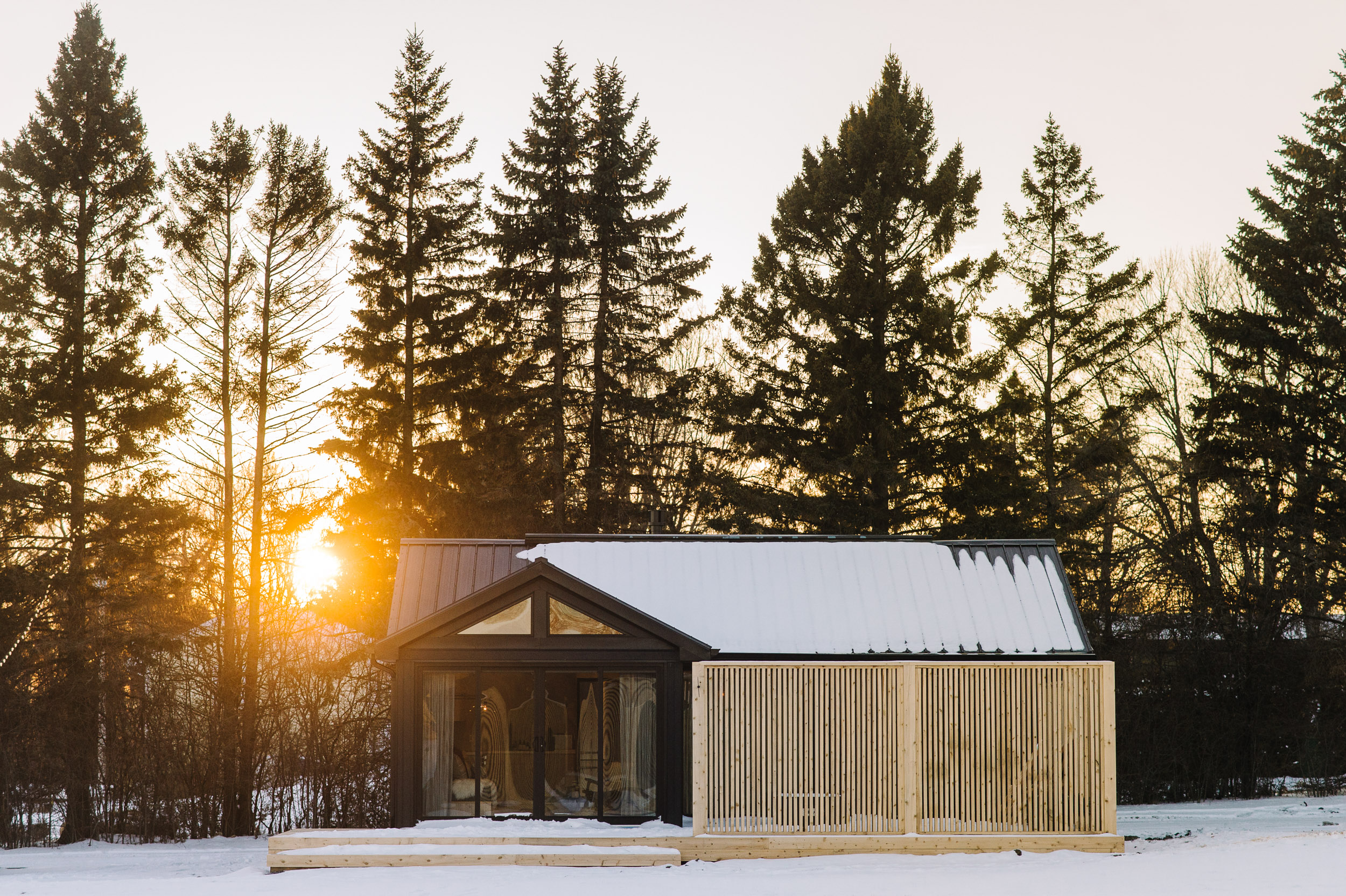 The word “escape” is a chameleon; an act of freedom that at some point evolved into another word for vacation. But when escapes are beautifully designed and thoughtfully detailed to be a refuge from reality, they can be both. Despite the tough circumstances of timing, Wander the Resort in Bloomfield, Ont., and Hinterhouse, one of a group of rentals operated by hotel brand Hintercompany in La Conception, Que., opened over the last year to acclaim and sold-out bookings until 2022. Although unique in many ways, they share an aesthetic grounded in Scandinavian design with elements of Japanese influence (a style dubbed “Japandi”), a simplicity that in turn reflects our desire to leave the world behind, if only for a little bit.

Japandi has seen an increase in interest—searches were up 100 per cent year over year according to the Pinterest Predicts 2021 report. Scandinavian design, of course, is nothing new: Ikea, launched in Sweden in 1943 and in Canada in 1975, is the world’s largest furniture retailer. Hygge, the Danish concept of cold-weather coziness, became a buzzword a few years ago. Clean lines, neutral palettes, layered textures, white walls and light wood tones are hallmarks of Scandinavian design. Add Japanese elements like low-lying furniture, bamboo accents, dividing screens and earthy ceramics, and you get a mix that is minimalist, but not cold. Useful, beautiful spaces, with everything in its place; a modern-society necessity as small-space living settles in for the long haul, and a calm place in a turbulent world.

“[Japandi] takes away a lot of the extra and gets down to the essence of simple and calm and restful, which I think is really appealing right now,” says Tiffany Piotrowski, interior designer at Tiffany Leigh Design in Barrie, Ont. Piotrowski has designed several escapes (including her own beach house in Sauble Beach, Ont.), working with clients to create their dream spaces. “Another hallmark of Japandi is the blending of inside and outside. Often designers will highlight gorgeous nature views with big windows trimmed in black that really frame the view as an integral part of the design.” 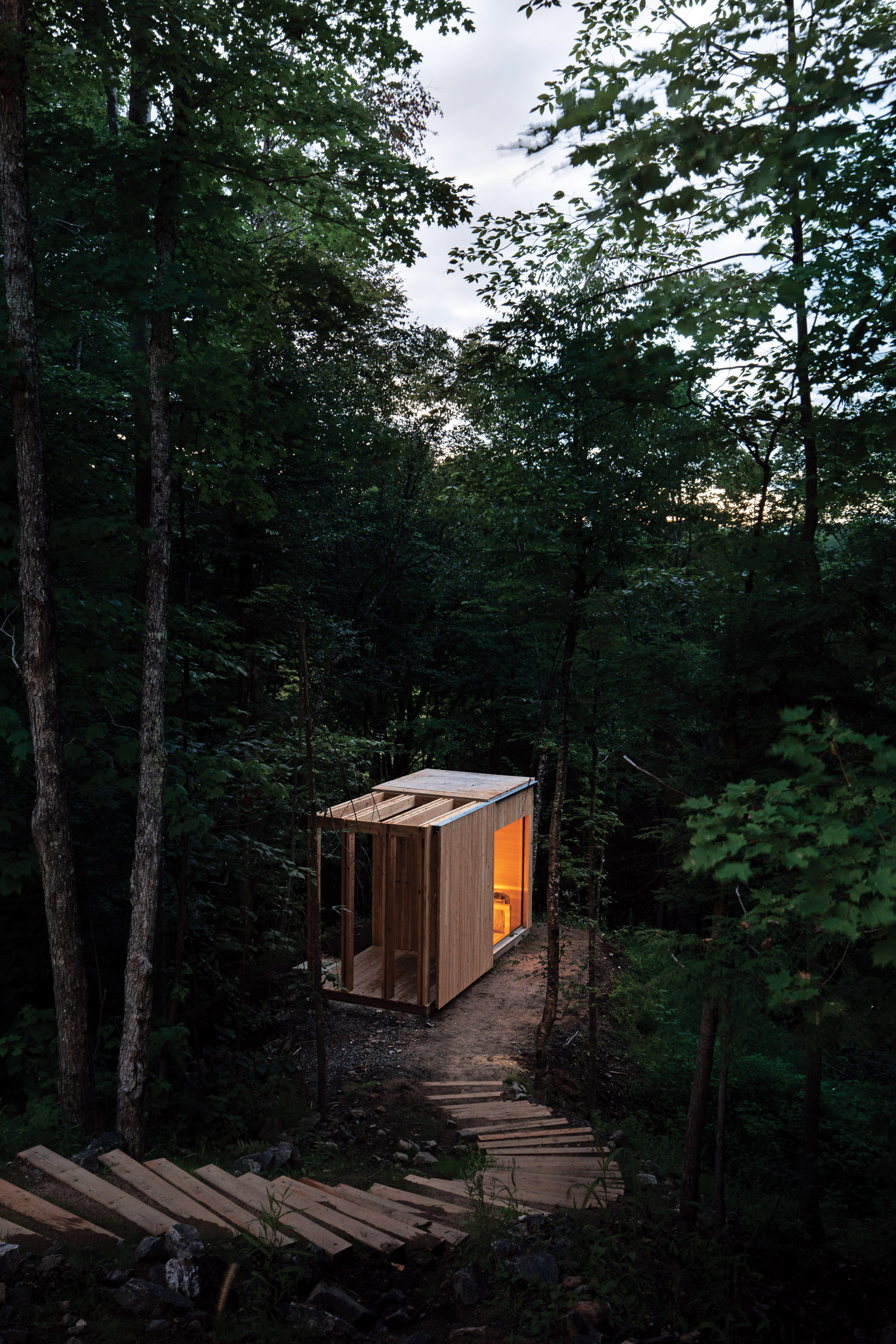 Whether you prefer evergreen forest views (Hinterhouse is tucked in Quebec’s boreal forest near Mont Tremblant) or sandy beaches and sunsets in Prince Edward County, both new vacation locations offer escapes shaped by natural surroundings. Wander was the lone Canadian hotel named in Condé Nast Traveler’s Best New Hotels in North America 2021. Interior designer Shannon Hunter fell in love with the region, packed up her life in Toronto and moved to the county with her husband. They spent two years renovating an old cottage resort and opened Wander in summer 2021.

The entire vibe is soothing, a curated combo of Scandi (or Nordic, as Hunter says—Nordic includes Iceland, Greenland and Finland; Scandi is Sweden, Norway and Denmark) plus Canadiana with accents of Japanese influence (for example, the low, straw tatami mat for seating). “The design of the cabins was intended to capture the Nordic concept of ‘simplicity being the greatest luxury,’ ” says Hunter. “I intentionally tried to create a space that immediately felt restful. Where your heartbeat immediately slowed. Nothing jarring, no bright colours, just a subdued space that allowed guests the opportunity to disconnect from the noise of regular life.” 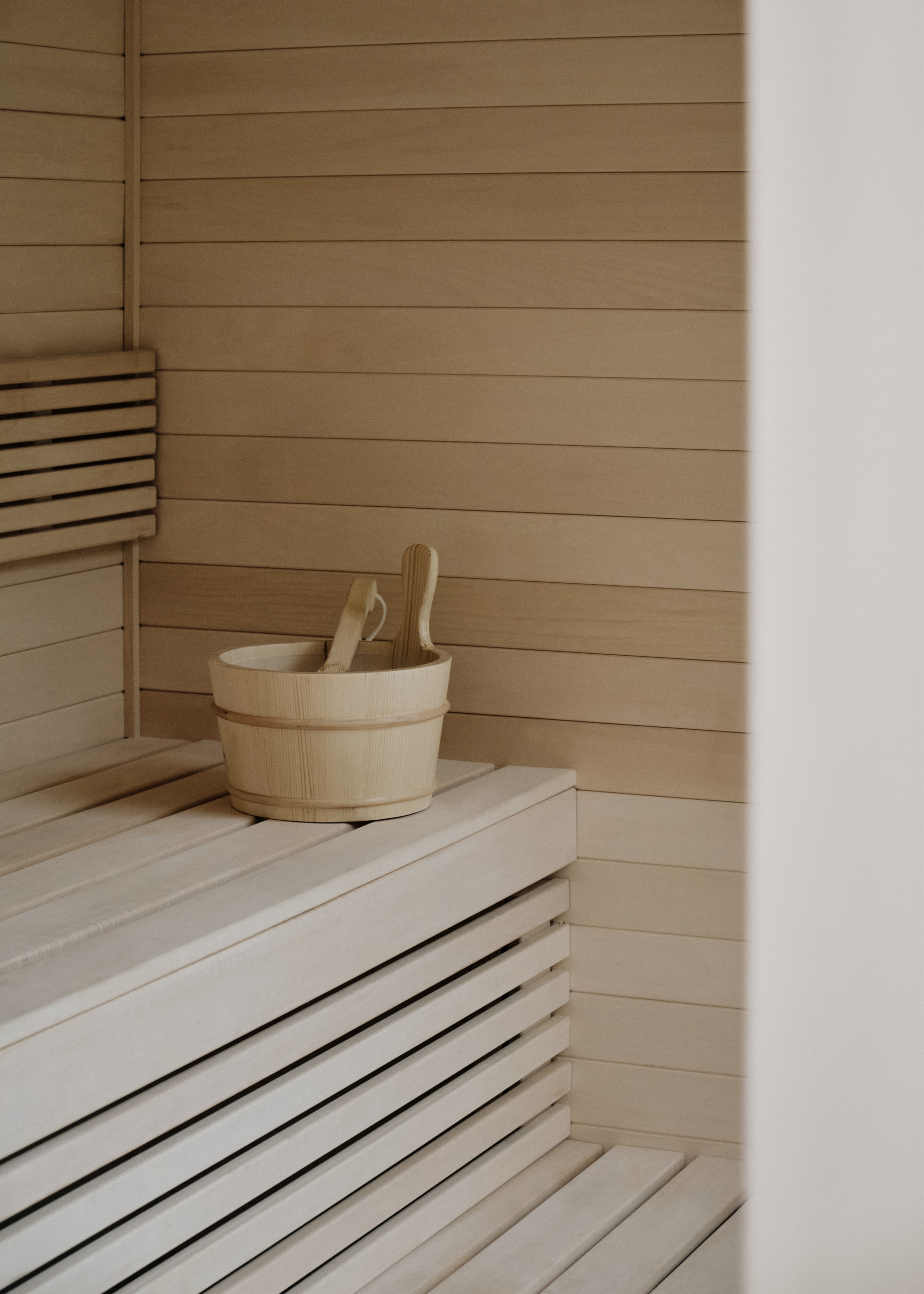 With Hinterhouse, the Japandi influence is more intentional. Designed by Montreal-based Ménard Dworkind Architecture & Design, there are few design frills and the interior is almost austere, but there are thoughtful extras, such as a herb garden built into the kitchen counter and a private wood-clad sauna with an outdoor shower. The emphasis on sustainable materials and a return to nature reflects the Gen Z demand for a small environmental footprint: Hintercompany plants 10 trees for every booking of Hinterhouse, and its smaller rental, Hintercabin. Windows make up 60 per cent of the structure, bringing the landscape indoors via floor-to-ceiling views throughout; the white-cedar-wrapped exterior is designed to blend with the surrounding forest.

“Japan’s long history of craftsmanship, detail and wooden joinery is something we try to bring into many of our projects, as well as the notion of ‘wabi-sabi’—letting materials patina and age with beauty,” says lead architect David Dworkind. At Hinterhouse, “the prominent use of wood includes the custom-milled cedar for the exterior cladding, which we left unfinished to age naturally.”

As we enter another year of pandemic life, escape may be futile. But elements of Japandi design are all over Instagram and Pinterest as amateur and professional designers lean into a sense of calm. “We are working on a home right now where we’re installing vertical wooden slats separating a small entrance from a living room space, which is very Japandi,” says Piotrowski. “I love how it adds a graphic architectural element and defines a space without completely visually blocking it.” If we’ve learned anything this year, it’s that an escape will always refuel us, even if it’s just down the hall.

This article appears in print in the November 2021 issue of Maclean’s magazine with the headline, “How very Japandi of you.” Subscribe to the monthly print magazine here.