She loved the outdoors. At the family cottage, she was the first in the water in the spring and last out in the fall. 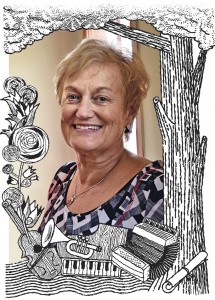 Jean Frances Coupar Lipton was born on July 31, 1947, in Bible Hill, N.S., to John and Elizabeth “Bette” Coupar, who owned and operated a local garden centre, Coupar’s Nursery, in the same village on the outskirts of Truro. Two years later, a sister, Sandra, arrived.

From the time she was a toddler, Jean, who went by Jeanne, loved the outdoors, especially spending time around the water at the cottage in Marshville, N.S., in Pictou County. Not even four years old, she lugged a hammer and boards down to the waterfront to try to build a platform for lying on in the sun. She wasn’t afraid of heights and often climbed the 10-m trees behind the family home. Convincing her to climb back down, however, was never easy, Bette says. “I would have to go up and get her.”

Jeanne was seven when she got a younger brother, Jack. The family would go skiing or skating in the winter, while summers often revolved around swimming. In her spare time, Jeanne also helped out as a clerk at the family store. “She knew all the flowers and trees,” Bette says. The business was open six days a week, but on Sundays, the family would head to the cottage.

Jeanne also inherited her grandmother’s musical talents. She learned to play the piano, violin and, for the school band, the trumpet. After she finished high school, Jeanne studied nursing. On March 1, 1967, Jeanne was out at a barn dance at the Nova Scotia Agricultural College when she met Michael Lipton, who worked at the railway station in Halifax. He asked her to dance and they hit it off. The next day, they had their first date: snowmobiling. Michael got a job as a railway crew dispatcher in Moncton, N.B., and Jeanne moved in with him when they married in February 1968.

That year, they had their son, John. Five years later, they had a girl, Heidi, followed by a second daughter, Nadine, in 1975. Jeanne was a hands-on mom, working on crafts with her kids, or 1,000-piece puzzles every few months. She insisted the children learn musical instruments, too. With her mom and Nadine, Jeanne had the three generations play violin together at various nursing homes. When Jeanne wasn’t teaching piano or violin lessons to other local kids, she was a voracious reader. She also meticulously wrote in her journal every day. “She knew exactly what happened on Jan. 18, 25 years ago,” Michael says. “We got boxes and boxes of journals.”

Jeanne loved to travel, and it wasn’t uncommon for the family to pack their bags on a day’s notice and head down to Florida for a vacation. “She loved to take pictures, but to get a picture of her, she almost always had her eyes closed,” Nadine says. Jeanne preferred anywhere warm with a beach, such as Hawaii or the Caribbean. Sometimes the only way to get her out of the water was to make up news of a shark attack, Michael jokes.

After her kids grew up, Jeanne enrolled at the University of New Brunswick, where she earned several degrees, including a master’s degree in education. She later became a supply teacher at local schools.

In the early 2000s, Michael finished building a cottage on the same plot of land as her parents, and Jeanne spent most of her days there. “She was always the first in the water in the spring and the last one out in the fall,” her son, John, says.

The family grew to include five grandchildren, whom she always referred to as “dolls.” But she used the term so often, “the kids thought that was her name,” Michael says. Whenever she knew her grandchildren were coming to visit, Jeanne would make fudge.

As she grew older, she never lost the travel bug. She planned a trip with Michael to visit China, but when he couldn’t go at the last minute, Jeanne went on her own. “When she got home, she was eating with chopsticks all the time,” Michael says. As they grew older, Jeanne and Michael also went to more and more dances—especially swing and jive. “Everyone would back off while we would dance,” Michael says. “We both loved to get on the floor and boogie.”

On May 16, Jeanne was at the cottage, relaxing on a small, one-person inflatable dinghy in the water. As she rested, the plastic boat was caught in a current pulling her out into the Northumberland Strait. When she realized she was far offshore without a paddle, Jeanne called for help as she frantically tried to bring the boat back to land. As she paddled using her hands, Jeanne suffered a heart attack. She was 66.