He marched to his own drum and was full of ambitious plans. He was obsessive about his beloved Blue Bombers. 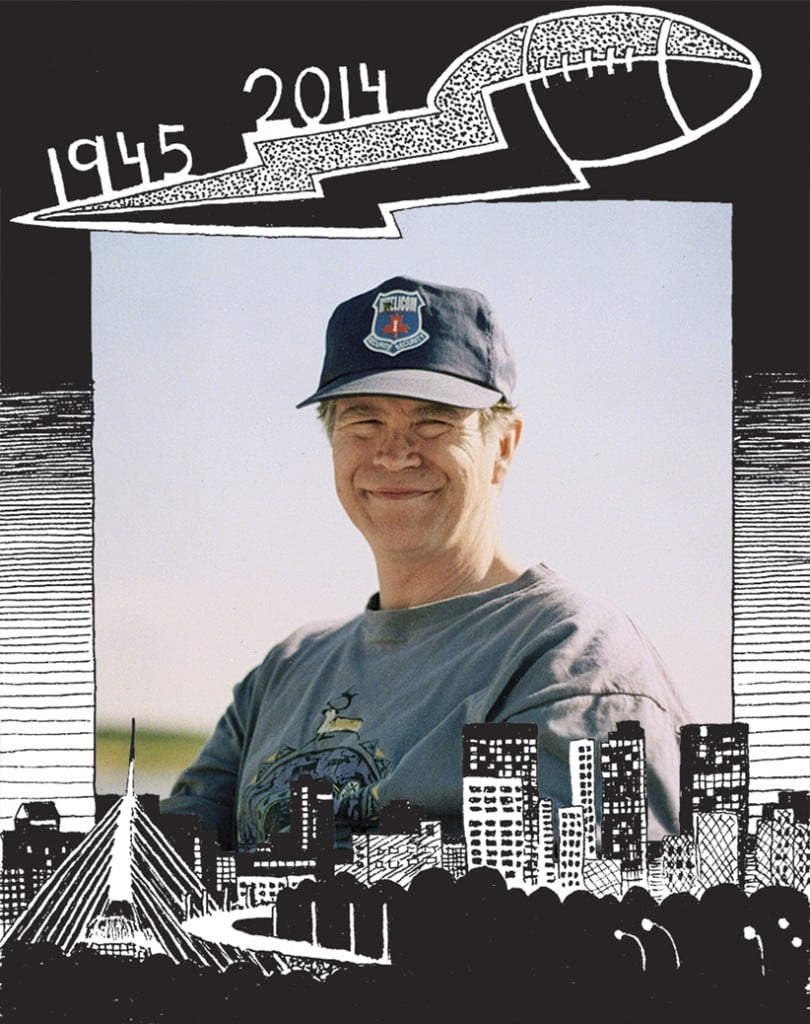 John Richard Stevenson was born on May 25, 1945, in Winnipeg. He was the fourth of six children born to John Sidney Stevenson, a real estate executive, and Mary Cecilia Stevenson, a socialite and homemaker.

The family lived in a three-storey home in affluent south Winnipeg, but the children spent little time in it. Afternoons were spent playing games outside until well after the street lamps blinked on. There was plenty of teasing and pranks. “Sibling rivalry was pretty high with the three younger ones of us,” says Richard’s sister Cathy—but it was all out of love. Dick, as his friends called him, was the more adventurous and quirky of his siblings, says Cathy. He loved the outdoors, from camping trips with Scouts Canada to summer trips to a cottage in Ontario’s Lake of the Woods.

Dick was whip-smart, says Cathy, but easily distracted in school by other pursuits or research into some new technology that fascinated him. “He was the one of us who marched to a different drum,” she says. “You admired that, but you worried for him.” He graduated a few years late from high school (it wasn’t until adulthood that he was diagnosed with attention deficit disorder), but his trademark optimism persisted.

After graduating, he took a few different jobs, working as a CN porter, a publisher’s rep and a salesman for a photocopier company. In 1971, he implored a friend to introduce him to an Eaton’s sales clerk who worked for her named Maria Lech. Maria was from the city’s north end and was a bit intimidated by the prominent Stevenson name. Eventually, she agreed to a date, and a nervous Richard spilled red wine all over her. He begged for another chance and, when he got one, poured a cocktail on her again. “So he says, ‘Okay, third date, I promise I won’t spill anything,’ ” says Maria with a laugh. “He had these puppy-dog eyes, and he was such a smooth talker. He would infuriate you one minute, but then he’d smile, and you’d go, ‘oh, okay.’ ” In 1973, they got married. In 1989, they had a daughter, Terra.

Richard always had big dreams and, along with Maria, launched a number of businesses. They designed cruise ship uniforms, co-founded and sold two successful ice cream shops named Dari-Works, and ran a fried chicken franchise. Some of his other ideas were a bit more quixotic: His sister remembers he started a movie rental store just before Blockbuster entered the market, and his most ambitious plan was an amusement park and resort facility near Kelowna, B.C. “It was going to be our Disneyland,” says Maria. Like many of his ideas, it didn’t pan out—but his enthusiasm never waned.

When he wasn’t staying up late plotting his next big idea, he was obsessing over Winnipeg sports, in particular the Blue Bombers, for which he held season tickets for decades. His close friend Wilf Entz, who regularly went with him to games, remembers that Dick would rattle off statistics, soak up pre- and post-game shows, participate in radio call-in programs, and buy memorabilia, including a jersey of favourite quarterback Buck Pierce—not long before he was traded away, Wilf recalls with a laugh. At one game years ago, Wilf remembers the two of them left the stadium with the score seemingly out of reach for the Bombers. But as soon as they left, they heard a loud roar—a last-second turnover gave Winnipeg the upset win. Richard vowed to never leave a game early, and he never did again.

Richard was fearless. He tried everything—flying planes, water skiing, surfing, diving—and fell in love with motorcycles. There were a few close calls, including a crash that broke his jaw six years ago. “But there was nothing that absolutely scared him,” says Maria. In recent years, he started biking to Bomber games, claiming that he had put on a few pounds. “Motorcycles, that was freedom to him—biking was a close second,” Maria says. This worried Maria and Wilf. “Watch out for motorists, and make sure you’re wearing your helmet,” was Maria’s typical refrain; “I will look out, and yes I’m wearing my helmet,” was his usual reply.

On June 9, Stevenson hopped on his bike to go to his beloved Bombers’ first pre-season game. He was riding along a busy stretch of Pembina Highway when he was struck so hard by a driver his helmet flew off. When people came to his aid, Richard was frustrated that they wouldn’t let him leave. “I’ve got a Bomber game to go to,” he said. He died in hospital the next day of his head injury. He was 69.