It's no joke: One sports writer's adventure in stand-up comedy

How does fifty-something sports writer Gare Joyce become a rookie in the stand-up biz? Well, it’s a funny story ... 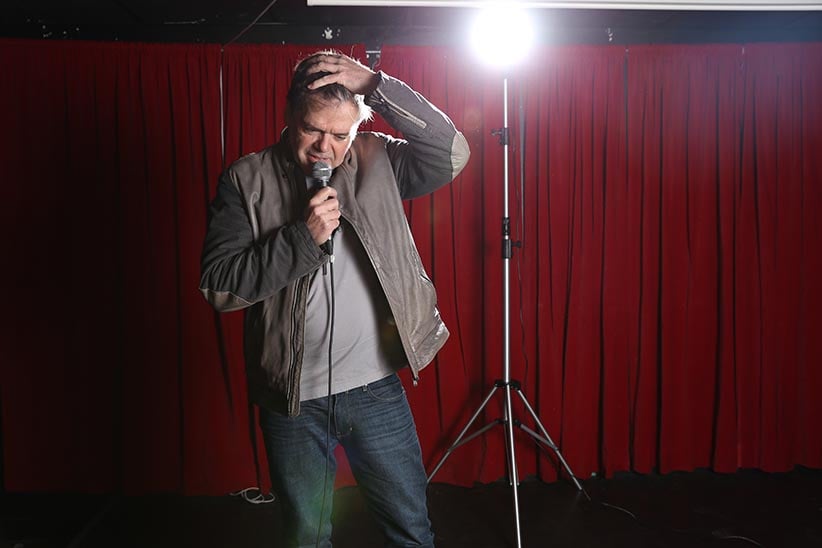 It’s no place for the maudlin or the claustrophobic. At open-mic Monday nights like this, the Corner Comedy club packs 60 cheeks into the 30 seats on the floor. A procession of comics will make their way to the stage one by one—51 on this night. They can’t all fit in the club, so they smoke in the alley and squint to read their set lists by streetlight. Vandad Kardar, the host, introduces each performer. The setting is simplicity itself: spotlight, stool and microphone. Nothing as superfluous as a mic stand.

For those in the seats, every shaking hand and every bead of flop sweat is painfully plain here at stand-up comedy’s entry level. The pros come out to test material in front of a focus group paying a $10 cover, but they’re outnumbered by aspiring amateurs. Not that it’s the card from the office going up to tell the latest joke he heard. The Corner is a venue for performers who’ve written their own material, who’ve practised it, who are seeking approval, desperately, cravenly, while trying to look like they don’t give a damn.

The comics skew young. A few go from gig to gig by skateboard. To the degree of geek they know chapter and verse of their heroes: Louis C.K., Dave Chapelle, Amy Schumer. I am skewed old. I snuck in to see Bob Hope at the CNE, sat in the crowd for Bob Newhart, parked in standing room for Jackie Mason. I was geek before they had geek.

The red light flashes. A gross-out comic finishes his scatological set and hands the mic to Kardar, who has shuffled the order, impromptu. “Next up: a friend from Second City,” Kardar says. “Gare Joyce.” How a fifty-something sports writer got to be a rookie in the stand-up business is pretty straightforward. I saw no point in rushing into it. 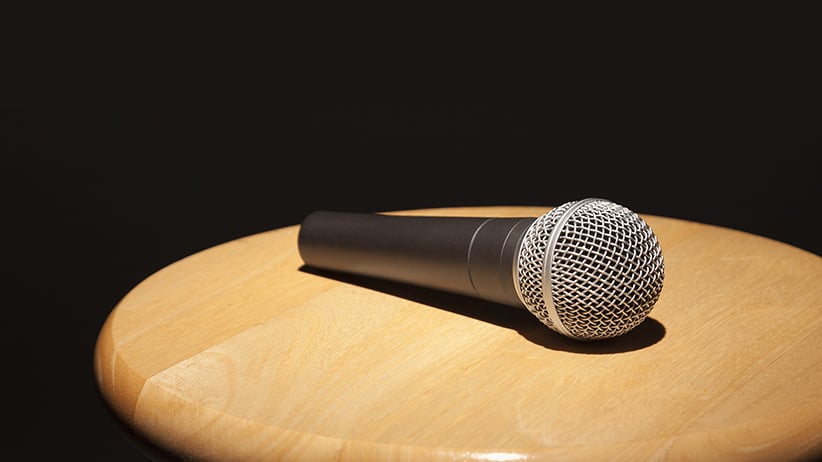 Stop me if you’ve heard this one: A Bay Street stockbroker, a cosmetics salesgirl in a babushka, a bagpipe player, a hip-hop artist, Morticia Addams and an albino from Pakistan walk into a bar. Okay, there are a few other warm bodies, including me. And yeah, it’s actually a classroom above a bar on Toronto’s Blue Jays Way. We signed up for Second City’s stand-up comedy class, and passed our audition when we paid our $306.

The school of comedy that turned out the likes of John Candy and Mike Myers offers Stand-up 101, a course that promises to take neophytes from zero to hysterical in six weeks. The man on this fool’s errand is Jim McAleese, a genial semi-retired comic. A lifelong Catholic, McAleese had a religious experience in 1972 at Massey Hall when he saw George Carlin, the counterculture icon whose legendary bits included “The seven words you can’t say on television.” “Here was a guy in a T-shirt and long hair,” McAleese told the class. “I was just a teenager but I knew when I saw Carlin what I wanted to be.”

It would be seven years before McAleese worked up the nerve to step on stage at the original hub of comedy in Toronto, Yuk Yuk’s. He killed that first time, even though he had vomited 90 seconds before going on stage. He was soon working main shows. Nearly four decades and a million guffaws later, he is passing on his hard-won wisdom to novices like me. He spends the first session walking us through the basics—punches, tags, callbacks and act-outs—before getting the cardinal rules of comedy. “It has to be true,” he said. “It has to be personal. It has to be visual . . . you’re standing there but they have to see a movie. It has to be tight, tight as a frog’s ass, which is water-tight. But just say ‘tight.’ And did I mention it has to be true?”

Okay, this is true. Six months later, everyone in that class has stayed in touch on a daily, maybe closer to an hourly, basis, kicking around material, booking trips to open mics around town, two or three nights a week. The cosmetics person, Nora Marku, dons a babushka to honour her Albanian roots and avoid getting carded. Dan Donnelly, the bagpipe player, and owner of a Ph.D. in musicology, has ignored our imprecations to work Amazing Grace into his act. The hip-hop artist, John Orpheus, trained as a Shakespearean actor but has embraced stand-up because he was tired of being typecast as Othello. In the role of Morticia Addams is Liisa Ladouceur, a Gothic vision in chalk and coal dust. The albino from Pakistan is Danish Ahmed, who has no fear of audiences because, with 20/200 vision, he can’t see them.

Along the way we recruited Muslim businessman Miraz Manji, Chinese model Ophelia Wang and Derek Richards, a guy who is a ringer for Larry the Cable Guy, except he actually works for a cable company. With me factored in, we’re surely over-representing the white male demographic in Toronto’s astonishingly diverse stand-up grassroots. The group needed a handle, and for now it’s Shameless, Still Nameless. The Nameless for short.

By the estimate of Joe Tuccitto, owner of the Corner, 200 comics are out there nightly in Toronto, most working two or three shows, some as many as five sets in clubs, at open mics, wherever there’s a stage and a spotlight. Tuccitto figures another 1,500 get out once or twice a week, like the Nameless. Odds are 100 to one against that any of us will get as far as Jim McAleese did, headlining clubs.

Our motivations range widely. For the driven Miraz, stand-up is a start-up business and he’s giving it a year or so to find out if there’s money in it, which is what you’d expect from a guy named the Emerging Entrepreneur of the Year by Toronto’s Board of Trade. For me, well, I could reach for the sportswriter’s handbook of clichés and put it down to love of the game. But there is a crossover between sports writing and stand-up. Ever since I got into the biz 30 years ago, my favourite sports scribes have always been the funniest—in L.A., Jim Murray was at once king and jester, every column reading like Johnny Carson’s monologues. Bill Simmons, a guy who worked with my former editor at ESPN, went completely Hollywood; Simmons did double duty, writing for Jimmy Kimmel by day and filing columns by night. Murray and Simmons set the bar impossibly high.

In writing about games people play, funny has the highest degree of difficulty. Many in my tribe try gags to break up the monotonous cycle of one-game-at-a-times and giving-it-100-per-cents. Most fail. Much safer to go poignant. Or wistful. Or angry. You try the comic at your peril—dreading your editor’s “I don’t get it.” I’ve heard that one too many times to think I have a future in stand-up. The best-case scenario: My friends in the Nameless make it and give me an opportunity to write for them, just for old times. More likely Miraz will need a nightwatchman down at ManjiCo world HQ.

Okay, you’re asking: What happened to the Bay Street broker? He quit. What chance did he have, with his mentions of Holt Renfrew’s valet parking and his reunion at Lower Canada College? With stand-up comedy, the privileged need not apply. Stand-up is the martial art to which the outsider resorts when trying to avoid harassment or persecution. Imagine Don Rickles as a little shmendrick raining down insults on a playground anti-Semite’s tiny forehead. You saw Trump on SNL, right? In stand-up, the well-born really can’t be expected to overcome all of life’s advantages.

As for what places me in life’s margins, I’ve resided there for as long as I’ve covered the perspiring arts. I don’t golf, I don’t smoke cigars and the last steak I ate was grilled in 1974. Along press row I’m like George Carlin rolling a joint beside the Rat Pack swilling martinis: A square, soy-based peg.

I’m in front of the audience at the Corner, my 16th open mic. I wait for the applause to die down. Which it does immediately. I can hear the toilet flush. To open, I do a callback to the gross-out comic’s last joke. My one-liner features three of the seven words you can’t say on TV, and a colostomy bag. The joke is in such colossally bad taste it could not have been reprinted in a family magazine—or the pages of Hustler. And of course it was the biggest single laugh I’ve ever got.

With a strong start, my set flies by. I can see by the stopwatch on my phone I’ve hit the four-minute mark, time to finish strong. True. Personal. Visual. Tight. And true.

I get a volunteer. I put my finger to my wrist.

“Ten years back I came down with pneumonia. Doctor checked me out. He said, ‘Your heart is operating at 15 per cent efficiency. Do you have any questions?’ I said, ‘Yeah, should I spring for a yearly parking permit or just go monthly?’

“I got the paddles three times. Trying to get my heart into rhythm. Didn’t work. The only lasting effect: I get sick to my stomach when I call CAA for a boost.

“So I had to have heart surgery. I get wheeled into the OR. Do you know what it’s like when you don’t know if it’s the last time you’ll see the love of your life? My missus said, ‘I love you.’ I couldn’t bring myself to say what I wanted to: ‘I hate sticking you with the credit card bills.’

“She was weeping. Maybe she knew.

“I’m right as rain now. Heart’s like a bass drum. But I check my pulse. If I ever check it and it’s not there, well, I don’t know what I’d do. I’d figure out something fast.

“Thanks for being a great audience. I gotta go charge Joe’s defibrillator.”

I hand Vandad the mic and step off the stage. I slump in a chair among the Nameless. If I’m going to die, let it be here.