From the moment he got his first guitar, music was his life, whether performing on a stage or at the kitchen table for his kids 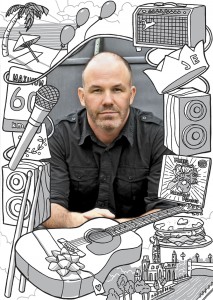 Marc Robert Nelson was born on Aug. 4, 1969, in Etobicoke, Ont., the first-born to Bob, a ground-crew worker with Air Canada, and Roisin, a painter and stay-at-home mom. A year later a sister, Cathy, was born, followed by a brother, Paul, in 1973. Six years later, the year Matthew arrived, the family moved to Milton, Ont.

Marc was a well-behaved child and often played the peacemaker among the siblings. He was active in hockey and soccer until, at age nine, he received a guitar for Christmas. “Once he discovered guitar, everything else was put by the wayside,” Paul says. Marc spent hours in the garage, teaching himself how to play. Pretty soon he was singing with the church group and at school talent shows.

During a Grade 8 school musical he played Elvis, shaking his hips on stage in front of his classmates. When someone accidentally knocked over the speaker and the sound system failed, Marc didn’t waver. “He kept dancing until they nodded that he had sound back,” Cathy says. “He just went with whatever happened.”

He became known for his unique fashion sense, and was rarely seen without a hat on his head. He had his mom make him a hat like Jughead’s from Archie Comics, which Marc wore for years. “He could go into any thrift store and come out with the coolest outfit,” Paul says. Marc, however, did have a serious side. As a teenager, he wouldn’t stop bugging the school-bus driver if the speed limit was being broken. One time, the driver had enough. “Marc got kicked off the school bus for telling the bus driver he was driving too fast,” Cathy says. The behaviour continued when he got his driver’s licence, she adds. “He drove the speed limit where it would hurt your head. You’d be going, ‘Please! Could you speed up?’ ”

Marc continued to immerse himself in music. He introduced his friends to new artists and, with a full set of drums and speakers in the basement, his bands would often come over to practice. “There were times when the windows would be vibrating,” Bob says. Marc’s first band was called Three Kool Guyz.

Not long after high school, Marc started travelling, making money playing music. He lived in Barbados for a year playing gigs at beach bars and the island’s Irish pub. He joined a resort company in Mexico as part of the entertainment team, and later lived in Texas before eventually returning to Canada.

In September 2002, Marc was playing at a bar in Ottawa when he noticed Ryanne Durnin in the crowd. He coaxed her up on stage, and the two sang Run-Around by Blues Traveller. “He was the guy in the pub who could take requests and nail anything that you asked for,” Ryanne says. “He didn’t ever have a set list. He just read the crowd.” She came back to see him perform the very next night.

Ryanne, a registered nurse, was moving to New Jersey, so Marc made the 6½-hour drive to visit her for their ﬁrst date. When, months later, Ryanne’s work took her to Pasadena, Calif., Marc packed his bags and moved with her. By May 2003, the two were back in Ottawa. They married in 2004, the same year Marc was invited to Athens to perform in front of Canada’s Olympians.

Though he had a passion for folk music, Marc also performed children’s shows at birthday parties and libraries. Under the stage name Mister Marc, he would visit elementary schools to teach kids how to write songs. In 2005, he and Ryanne had their first son, Jack. Three years later a girl, Evelyn, was born.

With a young family, Marc needed a more steady paycheque. He took a few office jobs but he didn’t enjoy being in a cubicle. He found work installing cable TV and on one call noticed the customer owned a fiddle. He asked her to play for him while he did his work. When he was done, he invited her to play with him for future shows. He later took a construction job, but kept performing in the evenings, and once shared a stage with Ron Sexsmith. On weekends, at the breakfast table, Marc would pull out his guitar to play songs with his wife. He would record Evelyn singing songs she made up on the spot and play drums with Jack.

On April 21, Marc was working in the basement of the Bank of Canada at Bank and Sparks Street. As the crew was doing demolition work, a wall collapsed and Marc was killed by falling debris. He was 44.