Masai Ujiri on how basketball is becoming Canada’s game 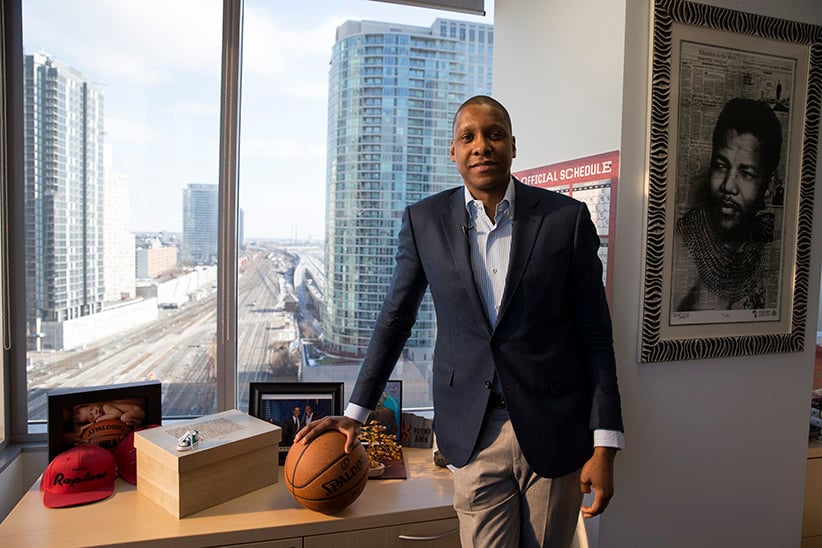 Masai Ujiri is used to trail blazing. The president and general manager of the Toronto Raptors became the first African-born GM in any North American league when he took over the Denver Nuggets in 2010. In 2013, he became the only non-American to be named NBA Executive of the Year. Now, he’s about to welcome the NBA All-Star Game to Toronto—the first time the festivities have ever been held outside the U.S. He spoke to Maclean’s about basketball’s growing popularity in Canada and around the world—and the Raptors’ dreams of winning big.

Q: The NBA All-Star Weekend is Feb. 12-14. What do you hope the party does for the Raptors and the city?

A: We’re trying to show who we are. What the city really is. People have these perceptions; maybe they’ve been here for a day, or have only heard about it. It was like when I first came to work here. You want to see the clean city that is always talked about, how nice the people are, the restaurants, the vibe, how diverse the city is. That’s what we want to show: what an enjoyable city it is, what a great city it is. Forget about basketball.

Q: This is the Raptors’ 21st season in the league. Is Toronto a basketball town now?

It’s become one—whether it was those Vince Carter days, and how great those guys were and what they did for the city, or now, [with] the evolution of the team. But the youth that comes out of this city now—I can’t mention too many names because they’re not our guys. There are so many players, everywhere in Canada now. Our fans are remarkable. The “We the North” stuff is incredible. And I think it sparks curiosity about the city.

Q: In 2014, there were four Canadians picked in the NBA draft, including Andrew Wiggins at No. 1. Twelve Canucks were on this year’s opening day rosters—a new record. Is it a blip, or do you think it’s a permanent change?

It’s real, 100 per cent real. Seven or eight years ago, when I was in the States, I was following all these kids on their youth teams, and now they are making their mark. The progress these guys are making, being prominent on their [NBA] teams, they have big futures. And the last two No. 1 draft picks having been Canadian, that helps. There’s noise and attention and that’s helping the growth of the game here. Now we have young Canadian players, 11 or 12 years old, watching these guys and saying, “You know what? I can do that.”

It’s a very important aspect of the game now, and I think every team realizes that. Your eyes have to be open everywhere. Whether it’s South America or Canada, Africa, Asia, it doesn’t matter.

Q: There used to be stories about U.S.-born players who didn’t want to sign in Canada because of the cold, or the taxes, or the lack of ESPN. Has that attitude changed?

Yes. Honestly, I think winning changes all of that. It doesn’t matter where you are—it could be Timbuktu—if you win, people will watch, they’ll follow and they’ll support. It’s my responsibility to put a team on the floor that will win, and that attracts players. Look at the teams that have been successful in the NBA. Yes, you have big, glamorous cities like L.A. But Miami has won, and so has San Antonio. Oklahoma City is a very successful team. They’re not the biggest markets.

Q: I was reading about how you like to look outside of your own organization and sport for inspiration. What have you learned from your neighbours down the road, the Blue Jays?

There’s always a formula, and you can always learn from success. I first came over to this part of the world the year Joe Carter hit the home run and they won the World Series, and last season was the first time since that they made the playoffs. A big club like that! That’s how difficult it is to win in sports—how difficult it is to rebuild, reshape, restart. Then, all of sudden, you get chemistry and momentum. How do you build that culture? That’s what I want for our fans.

Q: Your team had a nice win streak going. You’re sitting second in the East.

Q: How will you define success this year?

It’s simple, very, very simple. Win. I don’t know how far we go, but we have to win. That’s our goal. We want to win, and win big. Failure is not an option. We have 29 enemies. Our coaches and players understand that. They are competitive. They want to win.

Q: Are you still looking for pieces for this club?

Yeah, you keep building and trying to figure out how it will all come together. But for now, I think we want to grow—to let our players take the stage. A couple of years ago, we were six and 12, DeMar [DeRozan] wasn’t doing that great and we were a couple of hours away from trading Kyle Lowry. Then, all of sudden, we had some luck. People never talk about it, but you need a lot of luck in sports. A lot of stuff that has happened to us, we sit here like we’re all geniuses and we’ve done this and that. No, there’s a lot of luck. Things have to come your way. We’ve given our players the support and the platform, and they’re running away with it. How far can they grow? We’re going to see.

Q: The NBA salary cap is set to jump from US$70 million to $90 million next season. Meanwhile, the loonie is at its lowest point in 15 years. What’s that going to do to your plans?

We have to be strategic here. It’s one of the reasons why we have to nurture a lot of young players and develop our own guys. Every team is going to have money next season. It’s not one of those years where you’re competing with four or five teams for free agents. That’s why you have to have young players locked up—that was our reasoning behind extending Jonas Valančiūnas and Terrence Ross—and then go fight in the market.

Q: There’s lots of talk that DeMar DeRozan will opt out of his deal and test free agency. Can the Raptors afford to pay him the $25 million a season he’s likely to command?

DeMar’s our player now. And, with the way the CBA [collective bargaining agreement] works, we can offer him one more year than any other team. That will be a lot of money. He’s performed well. For me, it will take care of itself in July. It’s not like I don’t see that he’s liked by other teams. We have to show him that he’s loved here, us, the fans and the city. He’s a loyal kid.

Q: You’re outspoken, and your passion and mouth have got you in trouble with the league a couple of times. Have you learned from that?

Are there ways to do it better? I don’t know how you can curse better. [laughs] The scoldings I got still ring in my ears. I have learned from it. The first time, it galvanized our team. The second time, it ate me up, because I almost feel like I cost us the loss last year. When you do stuff like that it puts pressure. It killed me for a long time. Did I let the team down as a leader?

Q: What did you conclude?

I concluded that I’m a competitor. And, whatever happens, you keep leading. You can’t fear anybody. Why? Because at the end of the day, I might not be in this job a couple of years from now. I’m here to win.

Q: Growing up in Nigeria you followed the pros via VHS tapes and old magazines. How do kids in Africa connect with the game now?

They connect through social media and cable and satellite. It’s a lot different now. Back then, I relied on my mom, hoping she remembered to buy Sports Illustrated or Basketball Digest when she went abroad. Now a kid can just pick up his phone and watch the highlights and read the stories. Back in the day, we had to work to get our information. We watched All-Star games months after they happened, on a VHS tape that travelled from person to person until it broke.

Q: Your Giants of Africa program has been running basketball camps in Africa since 2003. Has that new way of connecting with the game altered them?

It’s funny. Ten years ago, as soon as the kids were done with a session, they were looking for food. Now, when they’re done with the session, they’re going for their phones. We’re moving with the times. Technology is taking over.

Q: Do you foresee a time when the NBA will expand overseas?

I think with time. It’s not my place to tell the NBA what to do. But no one can stop me from dreaming when I go home.

Q: Would you like more teams in Canada? Or are you happy to have it all to yourself?

Happy to have it all to myself. Ourselves. [laughs] No, we play all over Canada in the pre-season and the support is crazy. The fans are knowledgeable and you can see their passion for the game. It’s unfortunate the team in Vancouver moved, because it would have been unbelievable to have a rivalry. But while it’s like this we’re going to take advantage of it. There’s one team, there’s one country. There’s no bigger platform than that.