Rest assured, the cookbook is in the works 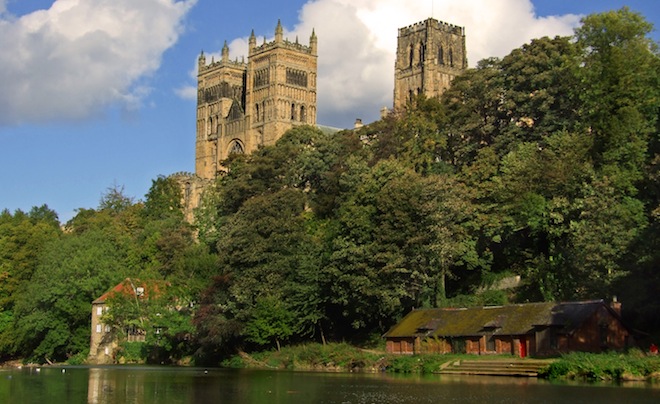 The recipes were written at the priory of Durham Cathedral, above, and were recently found in the Library of Sidney Sussex College, Cambridge (Wiki Commons)

Faith Wallis, a professor at McGill University, was looking through a manuscript in Cambridge when she came across a series of food recipes. Realizing that they predated the previously earliest known Medieval recipes by about 150 years, I’m guessing she–an expert in medieval history and science–was ecstatic.

The latin manuscript consists of both food recipes, like “hen in winter”–essentially chicken with garlic, pepper and sage–along with ointments. “Some of the medical potions in this book seem to have stood the test of time,” Giles Gasper, a professor at the Institute of Medieval and Early Modern Studies at Durham University told his institution. “Some emphatically haven’t! But we’re looking forward to finding out whether these newly-discovered recipes have done so and whether they also possess what you might call a certain Je Ne Sais Quoi – or Quidditas, to use the Latin.”

“The sauces typically feature parsley, sage, pepper, garlic, mustard and coriander which I suspect may give them a middle eastern, Lebanese feel when we recreate them,” said Gasper. “According to the text, one of the recipes comes from the Poitou region of what is now modern central western France. This proves international travellers to Durham brought recipes with them.”

On his website Eat Medieval, Gasper said that the recipes “would appear to date from the mid-later 12th century, which makes them amongst the earliest in the western tradition.” They were compiled and written at Durham Cathedral’s priory around 1160. (Footnote to film fans: interiors of the Romanesque cathedral were featured in the 1998 movie Elizabeth, starring Cate Blanchett.)

Gasper and his colleagues will attempt to recreate some of the recipes on Apr. 25 at Blackfriars, a restaurant housed in a 14th century Dominican friary.  And if you live near Newcastle, you can taste some of the dishes yourself on the following Saturday when a lunchtime Medieval-style feast will take place, along with a lecture on “Food in Medieval England”.

The rest of us will have to wait for the cookbook, which is in the works.