Our increasing obsession with flying, and hating every second of it

Peter Shawn Taylor: If flying is such a complaint-ridden, exhausting nightmare, why is the rate of air travel heading relentlessly skywards?

More likely are visions of endless line-ups, ever-changing security rules, viral videos of passengers being dragged screaming off planes, cramped seats, lost luggage, flight delays, broken video screens, extra fees for baggage, extra fees for food, extra fees for seat selection and extra fees for whatever airlines manage to conjure up next. And by all accounts it’s getting worse. Complaints to the Canadian Transportation Agency about air travel have risen by an incredible 900 per cent since 2012.

Peace and understanding? Not these days.

But then again, if air travel is such a complaint-ridden, time-wasting, wallet-busting nightmare, how come we can’t seem to get enough of it?

In 2017 the world’s travellers took more flights than ever before. According to the Montreal-based International Civil Aviation Organization (ICAO), the United Nations agency responsible for overseeing the global air industry, 4.1 billion people flew on 37 million scheduled flights. That’s up over seven per cent from 2016, which also set a record for air passengers and departures. Plus, over a third of the world’s freight by value now moves by air, up nine per cent from last year. Compared to world GDP growth of 2.7 per cent last year, demand for air travel  far outpaces economic performance.

“Air transport has grown exponentially since the 1970s, doubling passenger volumes every 15 years, on average,” notes ICAO Secretary-General Fang Liu in an interview via email. “It shows no sign of slowing today.”

Since the birth of commercial air travel at the end of the Second World War, revenue passenger kilometres, the industry’s standard metric, has been heading relentlessly skywards. The only noticeable bumps to this smooth upward trajectory are the First Gulf War, 9/11 and 2008’s Great Recession. And yet during each of these crises, demand for flights merely flattened for a while. Even the grounding of commercial flights in the days after 9/11 and the subsequent increase in security hassles worldwide did nothing to dampen this long-term trend. How come?

While we may hate the experience of flying, we love getting to wherever we’re going. For Canadians, this might be warm vacation spots during March Break, or summer holidays in France, Italy and other exotic locales. And where international travel was once the domain of the elite or business community, these indulgences are now within reach for almost every consumer.

READ MORE: Why is flying so awful?

The ICAO’s most recent annual report points out the real cost of air travel has fallen by over 60 per cent since the 1970s. That upward curve of kilometres flown is mirrored by an identical downward slope in the average price of air travel. At the beginning of the 1950s it cost about US$7 (inflation adjusted) to fly one tonne of freight or passengers one kilometre. Today it’s less than a buck.

Budget airlines, such as Ryanair in Europe or WestJet’s forthcoming Swoop in Canada, are a big reason for this downward pressure on prices (regardless of how all those extra fees leave you feeling). Today low-cost carriers account for approximately a third of all flights worldwide.

Despite the rising chorus of complaints decrying the complications of air travel and its customer service failings, ICAO’s Liu stresses that “the majority of our network’s passengers greatly appreciate aviation’s unique capability to connect them to global destinations.” Plus everyone loves a bargain.

All this growth in air travel is also occurring at a time when technology offers many new and effective ways to meet up without being physically present. Yet competition from Skype or other communications tools doesn’t seem to be making a dent in business travel, or the demand for convenient direct-connection flights. 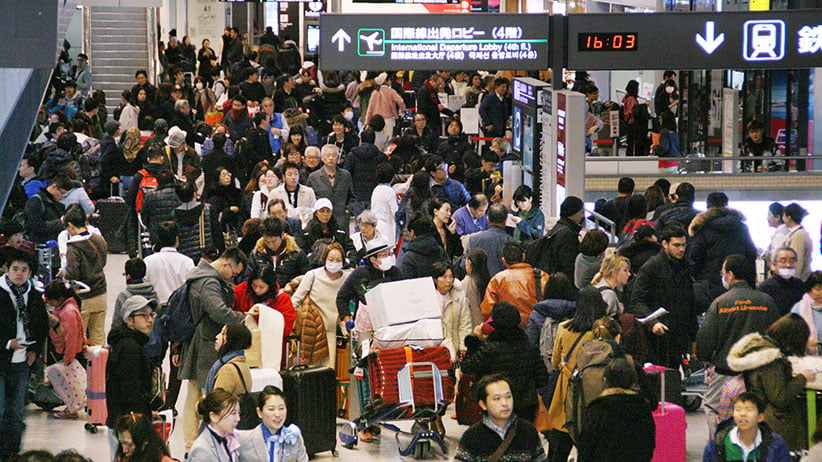 Holiday travellers crowd the arrival lobby at Narita airport near Tokyo on Jan. 3, 2018 (Photo by Kyodo News via Getty Images)

“The growth in air travel suggests people still want to meet others face-to-face when doing business,” says Filipe Campante, professor of public policy at the Harvard Kennedy School in Cambridge, Mass. “And it appears the ability to fly someplace direct still matters a lot.”

Campante’s research examines the role direct flights play in generating economic activity. Given the current flying range of airliners as well as air crew regulations, the typical maximum distance for scheduled flights is around 12 hours, or 9,700 km. Using this constraint, Campante and a co-author were able to test the impact direct flights have on the level of business connectivity between pairs of cities.

He found, for example, that Shanghai and Milan (just under 9,700 km apart and connected by a direct flight) boast three times the shared ownership linkages as compared to Shanghai and Madrid (slightly farther apart and without a direct flight until very recently). This suggests direct flights provide a substantial economic development benefit; businesses tend to pursue opportunities that don’t require bothersome connecting flights.

In Canada, the direct connection effect can be seen in the contrasting profiles of Montreal and Vancouver. Despite the fact Montreal businesses boast a greater number of overall ownership networks with the rest of the world, according to Campante’s data set, Vancouver has over 10 times the business connections with cities at the far end of the 9,700 km direct flight range—largely fast-growing cities in Asia. “Vancouver has an unusually high number of long-haul flights and an unusually high number of long-haul business links,” he says. Geography makes Vancouver luckier than Montreal.

As for the general clamour that flying has become another unpleasant chore of modernity, Campante suggests the air travel industry is simply a victim of its own tremendous success.

“The fact that more people than ever are flying contributes to this sense that the experience is getting worse,” he says. “More passengers overall means airports are more crowded, the security line-ups are longer and the flights are overbooked. And as prices keep going down, this congestion effect will just get worse over time.”

The flood of complaints, in other words, should be considered a tribute to the enormous growth and popularity of air travel in the 21st century. We love flying so much we think we hate it.

Feb. 14, 2018: This story has been updated with new data from the Canadian Transportation Agency