The brattiest pack in Mexico 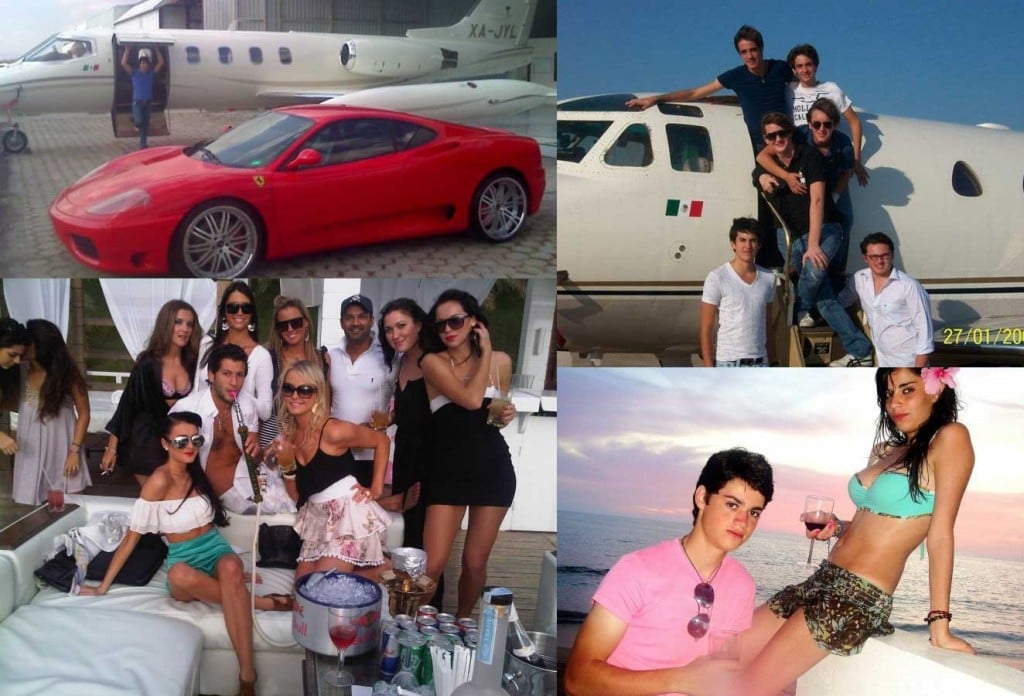 Mexican soccer fan Jorge Alberto López Amores was celebrating on a cruise ship off the coast of Brazil during the 2014 World Cup. After reportedly drinking mezcal for days, he told his fellow fans: “I’m going to make history! I’m going to stop the ship!” And he did. López told his friends to film him with their phones, then, using a deck chair as a springboard, he launched himself from the ship’s 15th floor into the Atlantic Ocean. He was never seen again.

López, the son of the then-Chiapas state attorney general, is an extreme example of what Mexicans call mirreyes, the indiscreet offspring of an entitled elite and an urban tribe of spoiled brats. Mirreyes are making themselves ever more visible in Mexico. Their conspicuous consumption stands out in a country where nearly half the population is poor, opportunities for social advancement are limited and social connections often carry more currency than talent in the job market.

The mirreyes—from “mi rey,” or, “my king,” which started as a greeting among men in the Lebanese community—wear designer clothes with large logos (the bigger the better), drive BMWs and travel frequently to foreign destinations. Their tans show they’ve spent time at the beach or on yachts—mirrey habitat. They pose for selfies with one arm around a girl and a bottle of champagne in the other. Their exploits are documented and sent to social media sites or society publications.

“Mexico has its own ‘Generation Me,’ [which] likes Instagram and selfies and seeing each other doing weird things,” says author and intellectual Ricardo Raphael, who wrote a book on the rise of mirreyes titled Mirreynato, the Other Inequality. “In Mexico”—unlike in other countries—“if you are from the Generation Me . . . you won’t face the law.”

Raphael sees the mirreyes as more than just an extension of what used to be known as “juniors,” the children of elites put into business and political positions based on little more than family or friend connections. Instead, he identifies a troubling sign of the times: princes of privilege, increasingly enabled by impunity, inequality and corruption. “They’re careless now,” says Raphael, who has ties to the elite as the nephew of former president Miguel de la Madrid. “They don’t face the consequences of their exhibitionism” as the elites born out of the Mexican Revolution of 1910 once did. The regime of the past century often spoke of increasing prosperity and social justice—and delivered on the former until the 1970s. The latter was empty rhetoric, as corruption was common and politicians and union bosses accumulated fabulous fortunes.

The changes in the elite coincide with Mexico’s disenchanting experience with democracy and the end of one-party rule in 2000 —a period Raphael calls “El Mirreynato” or “the mirrey rule.” This era has been characterized by worsening inequality, declining social mobility, discrimination and an underperforming education system. “I realized that I was discovering more than an urban tribe. I discovered the guys who benefited, who most enjoyed the Mexican transition to—I wouldn’t say democracy—to this regime,” Raphael says. “It’s not a political regime, I would say more a values regime that can explain why politics and economics are like they are.”

Money provides self-satisfaction, but also bestows legal and political protection, according to Raphael. As an example, no one with bodyguards or riding in a convoy of bulletproof SUVs is stopped by the police. Money attracts powerful friends who will look the other way in cases of corruption. It also brings connections important for business and politics.

Connections can be made in the country’s private academies. Standardized tests show they perform only slightly better than poor-performing public schools, but parents, Raphael says, “are not paying for their children to go to school and get knowledge, but to have friends” who can help them later in life. In his book, Raphael recalls the long line of parents and families forming on the morning of graduation at Colegio Miraflores, where President Enrique Peña Nieto’s daughter was studying. They were hoping for a ticket near the first family’s table, which offered the possibility of appearing with them in the society pages.

The rise of the mirreyes is documented in society publications, which have mushroomed in Mexico over the past 15 years as a showcase for the foibles and terrible tastes of the nouveau riche. “The hardest thing was trying to get the old money to come into our pages,” says Pedro Zurita, former editor of RSVP, a society supplement in the Excélsior newspaper. “We had to put the new money on hold, they were calling us non-stop.”

Among those opening their homes: first lady Angelica Rivera, who showed off her $7.2-million mansion with its minimalistic design and mood lighting in the pages of ¡Hola! It was later reported that the soap-star-turned-first-lady purchased the home from a prominent government contractor. The same contractor also provided credit for the home, which became known as the casa blanca (white house).

The first lady is far from the only public ﬁgure to encounter embarrassment. The daughter of the powerful oil workers’ union boss Carlos Romero Deschamps was exposed by the newspaper Reforma in 2012 for posting photos of her luxury lifestyle on Facebook, including trips on private jets, Gucci bags and expensive bottles of wine. A regional director of the government housing program Infonavit posted a photo on Facebook of a yellow Porsche he gave his son—a director with Liconsa, an agency providing milk to impoverished Mexicans—for Christmas. (He later claimed it was a joke.)

In 2011, Pepe Ceballos started posting photos of mirreyes on a website he created with a friend called Mirrreybook—three r’s to emphasize how mirreyes roll their r’s. The site attracted more than 1,000 followers in the first three days. Mirreyes themselves started sending photos—often taken on the beach or in nightclubs, but increasingly on private planes and in international locales. Brands like Jose Cuervo came calling, too, using Mirrreybook photos to pitch tequila to an attractive target audience. “A mirrey is a person always in a party, in a nightclub, with lots of girls, always ordering bottles,” Ceballos says. “It’s a person that has this need for you to see them, whose personal worth is in these valuables,” he adds, explaining that there are “wannabe mirreyes,” trying to look the part and enjoy the same privileges.

Meanwhile, Ceballos says, mirreyes have started mimicking the children of narcotics traffickers. “Mirreyes, who don’t have anything to do with narcos, seem like they’re competing with them to see who has more,” he says. “We’ve suddenly seen it in the kind of fashion or the bling-bling. There’s more influence from the narcos.”

This also reflects the infiltration of money from shady sources into high society—much as it’s suspected to have seeped into the political process. The old guard doesn’t necessarily embrace the newly moneyed right away, but will do so, to a degree, as their children interact and form friendships. “All money is now welcome,” says Guadalupe Loaeza, a columnist and author of several books on the upper crust. “There are no longer any scruples.”

It will come as no surprise that mirreyes also aren’t known for treating their teachers and hired help with respect, much less their girlfriends (lobukis, or “little bitches,” as they’re called). “It doesn’t look good for the future if these people get into power. And they will,” Zurita says. “They’re not there yet, but they’re getting there. That’s when things are going to get really bad, because you have an uneducated class of people with no respect for others, who are used to doing whatever they want.”