The End: Goodbye to the mail carrier

After centuries of strikes, slights and provincial squabbles, electronic mail spelled his death 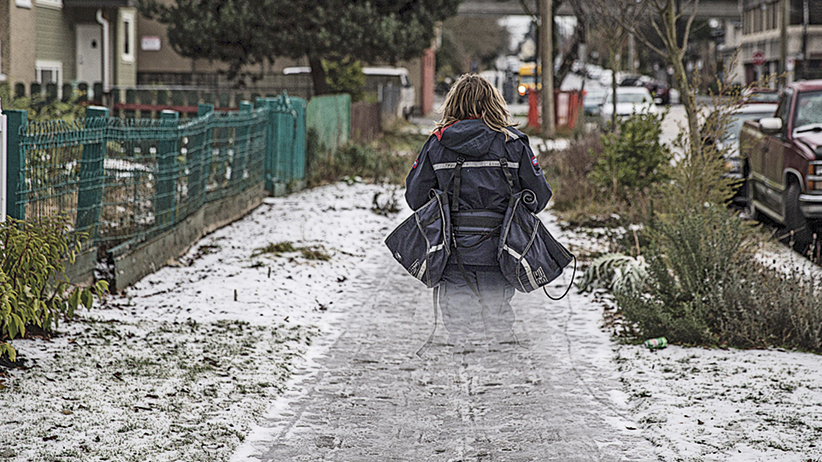 In April 1754, five years before New France fell to the British, a birth notice appeared in the Halifax Gazette. The Canadian postman was born at the city’s south gate, in the country’s first post office.

In his youth, he was known more for enthusiasm than efficiency. His preferred mode of transportation was birch-bark canoe and his reliability was sporadic at best. Friends remember one route, upriver and through dangerous terrain, that took 105 days to move mail from Quebec to Halifax.

American uncle Benjamin Franklin, deputy postmaster for North America, intervened with some much-needed direction. He named Scottish-born Hugh Finlay as Canada’s first postmaster, stationed in Quebec City. He organized a weekly postal service between Quebec and Montreal, and a monthly post to New York and on to Falmouth, England. In 1774, Finlay left Canada to replace Franklin, who’d been fired for his questionable role in the upcoming American Revolution.

His absence left the postmen constantly bickering over responsibilities. A successful postal service needed to be directed by one person, Finlay reported—such as himself.

Finlay returned and, under his guidance, the letter carrier flourished. New routes included a stagecoach from Niagara, twice-a-week service from Quebec to Upper Canada, and “a courier between Kingston and York dispatched once a fortnight.” In their prime, the postmen sought freedom and independence from their guardian. Defiant, representatives from the provinces met in Montreal to discuss strategy. Like squabbling siblings, they agreed on a uniform postal rate and the first Canadian stamp (fittingly, a beaver), but each province retained distinct control. (Prince Edward Island was invited to attend, but every family has its black sheep, and it declined.)

The years leading up to Confederation were a golden age for mail service: Prepaid postage that cost a penny per half-ounce wowed users; free home delivery began in Nova Scotia; and mail cars on trains were moving mail faster than ever. Then, in 1871, pre-stamped postcards were introduced and Eaton’s first mail-order catalogue made its debut in 1884.

Increasing demands began to take a toll, and 1918 saw the first strike over pay. Postage fees were up—to almost 10 cents a letter—but wages and bonuses remained the same. The grumbling continued into the 1950s, when all parties agreed to a five-day, 40-hour work week.

Still, the health of the postman began to falter. Airmail service, electronic mail sorting, and bright red mailboxes were introduced. Mail volume had doubled by 1965, when letter carriers again illegally walked off the job in 30 cities. Unable to control the rebellious posties, prime minister Lester Pearson folded to their demands. He even allowed them to wear short sleeves, which were sloppy and unprofessional, but all the rage.

The surly postman, meanwhile, became synonymous with grievance and dissatisfaction. When an Oklahoma postman shot and killed 14 colleagues in 1986, “going postal” entered the public lexicon as shorthand for exploding with violence and rage. TV Guide referred to Seinﬁeld’s Newman, a lazy and incompetent postman, as one of television’s nastiest villains.

Electronic mail signalled the beginning of the end. The World Wide Web went live in 1991 and, though symptoms were at first mild, email proved fatal. “It’s been a steady decline year over year and it’s not going to reverse itself,” Canada Post spokesman Jon Hamilton reported in October. Even though you can now order one with your face on it, the average Canadian household uses just two stamps a month.

So, facing a projected loss of $1 billion, Canada Post began a five-year plan to eliminate home delivery to five million Canadians beginning this year, with parts of Winnipeg, Calgary, Montreal, Ottawa, Halifax and Oakville, Ont. In 2015, one million Canadians will have to walk to a community mailbox to get their mail; by 2019, the letter carrier will be dead. After 264 years, the postman will never ring twice, or ever again.