The fight for diaper-changing tables in men's washrooms

Should all mens washrooms in Canada have diaper-changing tables, or is there no place for the state in the nation’s public loos? 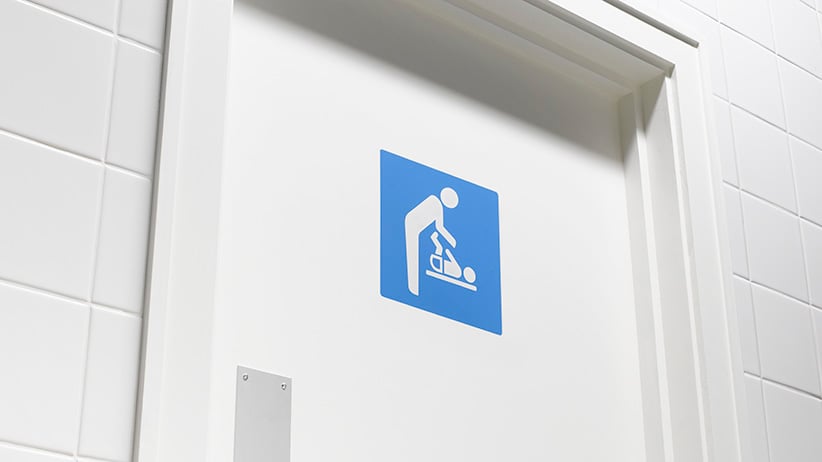 The loo. It’s where we take refuge when nature calls. It’s also, increasingly, the front line of culture wars. After becoming the battlefield where conservative America squared off with the gay rights movement over transgender people’s right to use bathrooms that correspond to their reassigned gender, restrooms are in the news again. This time it’s about potty equality.

Earlier this month President Barack Obama signed into law a bill mandating diaper change tables in every bathroom of a public building—meaning men’s restrooms, too. The move, which follows a public campaign by actor Ashton Kutcher asking big-box retailers to do the same, was widely saluted as another swipe against gender stereotypes of diaper duty always being mom’s job.

Cheers came from north of the border as well. “Obama and Kutcher just stirred the pot again,” says Elizabeth Porto, a Mississauga, Ont.-based mother of two who has been campaigning for Ontario to make change tables mandatory in every restroom.

With a two-year-old son and a three-year-old daughter, Porto and her husband, Robert, often practise what she calls “tag-team parenting,” with mom tackling one kid and dad the other. But if both diapers need changing at the same time when the couple is out at a restaurant, Mr. Porto will often come back from the men’s restroom reporting that there are no facilities to perform the operation. “Not only should there be a change table in every bathroom, but to just have one in the women’s washroom and not the men’s is very gender biased. It’s infuriating,” says Ms. Porto. That’s why, about a year ago, she started a petition to amend the Ontario Building Code.

She is not alone. There are at least six online petitions in Canada demanding baby stations accessible to all. “Only having a change table in the Women’s washroom is unacceptable. It’s 2016 after all!” reads the appeal from Vanessa Walsh of Mount Pearl, Nfld. Last year, University of Alberta student Kimiko Pocha started the Twitter campaign YEG Washrooms to add diaper tables in Edmonton washrooms. And in Penticton, B.C., Kyle Bachmann, a single dad, gained attention when he complained on Facebook about his troubles finding a clean surface to change diapers on. “Not even the library has one,” he told a local news site.

A lack of change tables in men’s rooms is a constant irritant in the lives of stay-at-home and same-sex dads, says Jeremy McCall, sponsor of another Ontario-based petition and president of Dad Club London, a volunteer support group for fathers in London, Ont. Dads are often forced to change their wee ones on the bathroom floor or sneak into the ladies’ room, hoping no one comes in. “It feels like getting punished for wanting to be good dads,” he says.

But not everyone is on board. Although Congress passed the Bathrooms Accessible in Every Situation (BABIES) Act with a large bipartisan majority, previous attempts to adopt similar measures stirred controversy. In California, Gov. Jerry Brown struck down two bills in 2014 that would have made change tables more accessible for men. A similar bill in New York has been languishing in committee since mid-2015.

Unlike with the bathroom wars over transgender rights, the conservative backlash over diaper changing isn’t about social values but about the role of government. Few argue against the desirability of granting parents a sanitary place to wipe clean a baby bum or of enabling dads to attend to such duties. But it isn’t the government’s business to legislate a change table into every bathroom, which would put an undue onus on private enterprises, especially small businesses, or force taxpayers to shell out in order to subsidize potentially costly bathroom renovations.

Adding change stations isn’t always a matter of attaching a foldable plastic board to the wall for a few hundred bucks, says Tony Elenis, head of the Ontario Restaurant Hotel and Motel Association. Restaurants and pubs, especially in downtown areas, can’t fit a diaper table in what are already small, cramped restrooms. “For a small business, it means they have to reconfigure the floor space, possibly losing seating space,” which, in an industry with thin margins such as the restaurant sector, is a big deal, he says.

Besides, he notes, Ontario is already ahead of the U.S. The province amended its building code to mandate universal restrooms with change tables in all new and larger buildings—not just government buildings—starting Jan. 1, 2015.

Ms. Porto, a federal occupational health and safety officer and a former restaurant owner, is having none of it. “Don’t tell me there’s no space for change tables,” she quips, “if we fit them in airplane restrooms, we can find a solution for small restaurant bathrooms.”

For his part, McCall is determined to turn the issue into a win-win. Instead of naming and shaming, McCall prefers to contact local restaurateurs in private to explain why a change table in the men’s room is a good idea. Generally, he says, small business owners are receptive. And to show that being good to dads is just good business, Dad Club London rewards eateries that install new change tables by holding a celebratory brunch on the premises.

Says McCall: “They get their money back and a certificate of appreciation on the wall.”