Mitchell on her old-fashioned game, beating younger math whizzes and why you’re naturally a gambler or you’re not 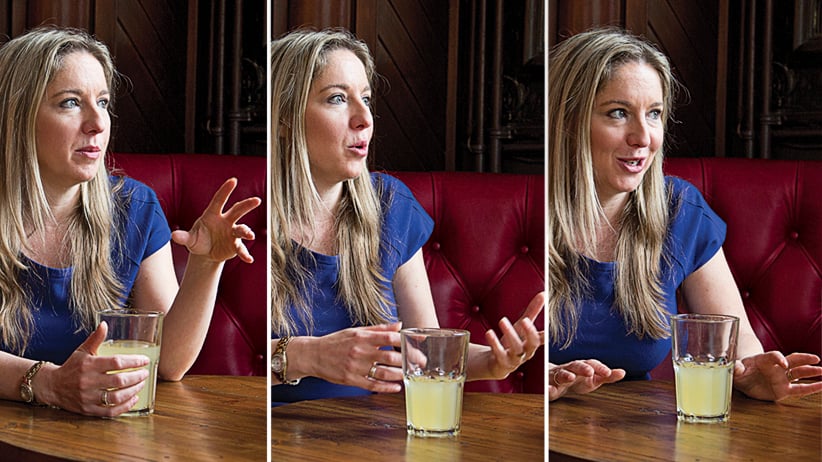 In April, Victoria Coren Mitchell became the first two-time winner on the European Poker Tour. Today, she is one of the winningest women in poker, ranking ninth internationally with total earnings of $2.6 million. Yet Coren Mitchell, 41, is more than the sum of her cards. Educated at Oxford University, she published her first book at age 17. Today, she works as a writer and TV presenter: hosting BBC’s television quiz show Only Connect and penning a weekly column for the Observer newspaper. Coren Mitchell is the author of For Richer, For Poorer: Confessions of a Player.

Q: The European Poker Tour event in San Remo, Italy, was a nail-biter; you clawed your way up from eighth place to take the win. Was there a moment when you knew it was yours?

A: Only when there were two of us left. When there were just two of us, I rang up my husband at the break and said: Oh, I’m going to win. I suddenly thought I was. I play quite an old-fashioned game of poker. It’s a lot about getting a sense of people at the table, rather than the maths of the thing.

Q: And yet, poker seems to be going the way of professional chess. Up-and-comers are teenaged boys who study coding and train with computer databases .

A: Well, it has certainly gone that way, compared to when I first started playing, when it was all old guys and, in this country, quite a lot of criminals. Compared to that, it’s now very young and mathematical, with lots of Scandinavian university graduates. But the thing about poker is that you can’t solve it like backgammon or even chess. There are elements of chance and elements of personality. [British novelist] Martin Amis said: “On a chessboard, the properties and powers of a bishop are fixed. In poker, it’s all wobbled through the prism of personality.” And that’s very true. Any personality can affect the game, and anyone can win it. Yes, there are large numbers of young people approaching it very mathematically, but it’s perfectly possible to beat them.

Q: You tweeted that you were drinking during the competition. That doesn’t seem very wise!

A: (Laughs) I had a couple of glasses of wine. That was partly because I was very aware that a lot of people who were watching the tournament on the Internet hadn’t ever seen poker before. I wanted to show prospective players that there is a fun approach to it. Quite a lot of young people at the table were very serious, with their hoods up and their sunglasses on and not really talking. I want poker to be more fun. I want it to be like it was when I started, with the banter and jokes. So I thought: I’m going to have a drink and chat to the table to advertise to people that this is what poker should be like. I didn’t actually get drunk, or I wouldn’t have been able to play properly.

Q: Has poker’s image been cleaned up from the days when crooks dominated the casinos?

A: Oh, definitely. It’s a much more respectable game. There are more people doing it for a living. It is more respectable, but not entirely. In London, in the casinos, there are still a few questionable gentlemen. I’m glad about that, because it brings a bit of colour.

Q: After you won big in the European Poker Tour, news outlets described you as one of the best female poker players of all time. How do you feel about that gender qualification?

A: The reason for it, of course, is that there are so many more men in the tournaments. There are probably 15 or 20 men for every woman. But really, I didn’t notice it so much this time, compared to when I first won in London in 2006. That was the first time that a woman had won that event at all and there was a lot of talk about it.

Q: At the end of May, musician Neko Case got a lot of attention for responding to a tweet that referred to her as a “wom[a]n in the music industry.” She replied: “I’M NOT A F–KING ‘WOMAN IN MUSIC, I’M A F–KING MUSICIAN IN MUSIC!”

A: That’s admirable. I would say that’s probably a person who takes herself more seriously than I do. And there’s nothing wrong with that; she’s a musician and that’s a properly artistic thing to be. I’m just a poker player who does a bit of TV. But I think that when it comes to sexism, one has to be very careful to distinguish the dangerous sort from the harmless sort. For as long as I’ve been in poker, I’ve experienced huge amounts of gender discrimination, but some of it is fine. It’s fine when they stop swearing at the table because I’ve sat down. There’s no need for them to, but it’s quite charming. It’s not fine when they put their hands up my skirt. And it’s fine when they talk about me in terms of being a female player, because poker is all about exploiting people’s assumptions and prejudices, and that has been quite useful for me. In poker, you’re out for yourself. If I’m beating people and winning their money while they think women are less good at poker then men, it doesn’t make any difference to me.

Q: When did you start playing poker?

A: A long time ago, my grandfather used to play blackjack with me, when I was very small, and I quite enjoyed that. I think you’re naturally a gambler or you’re not. But then, when I was 14, my brother started playing poker. Suddenly, there were lots of boys in the kitchen playing a game, and I thought: I don’t know any boys; maybe I’ll start playing so I can hang out with them a bit. I lost interest in the boys quite quickly, but I was gripped by the game.

Q: Were you a natural?

A: I wasn’t terrible. I have quite a good card sense. My grandmother taught me to play bridge, so I had a reasonable sense of the cards and how they work. I did all right in that game with my brother’s friends. But then, when I stepped up a gear and started playing for proper money—which was maybe £200 (around $365), so quite a lot when I was a student, I just lost. I lost and lost—probably because the money was too big and I was scared. One of the first pieces of advice I give to people when they want to play poker is: Don’t play for more money than you can easily afford. It sounds like I’m being sort of pious, but really, it’s a practical thing. If you’re nervous about losing the money, you won’t play properly. Similarly, if the stakes are too small, you won’t care and you won’t play properly, either. Yes, I lost for a few years when I was a student. Only later did I start going to the casinos.

Q: Do you play online poker?

A: Oh yes. I play lots online. Today, you can go on to Poker Stars and play 5,000 hands for the cost of about $10 and gain all the experience that it took me 10 years to get my head around, and for a lot less money. But it’s a very different thing. There’s no etiquette in online poker. If you go to a cash game and you sit down for half an hour and win and then get up, that’s rather bad form. You really have to commit to the whole evening if you want to be sporting. In online poker, you can play whenever you like for as long as you like: all night, at nine in the morning and so on. Both of these disciplines have something going for them. I like the ease and comfort of playing online, but I miss the people.

Q: When you were a teenager, you won a writing contest and were given a newspaper column in the Daily Telegraph. So, for more than half of your life, you have been writing very publicly about yourself. More than 20 years after it all began, do you ever regret that early exposition?

A: No, because I have quite a healthy mental distinction between the “I” that appears in print and on television and my actual life. On TV and in print, just as in poker, you do the best job if you project a concentrated version of yourself. So it’s true—but it’s a slightly pantomime version of the truth.

Recently, for a radio program, I was looking back on some of the old diaries that I wrote when I was a teenager and had quite a crazy life. I thought: I’ll look back at these diaries and see what I made of it all—the newspaper column and the book. The answer is that I never mentioned it! All I talked about was boys that I’d seen on the bus: “There was this guy, maybe he smiled at me, maybe he didn’t, I don’t know, will he be there tomorrow?” It’s all I wrote. It must have been instinct, because it wasn’t a learned thing—but even then, the version of myself that I was projecting and my private self were completely different.

Q: What is the worst mistake that new poker players make?

A: One big mistake is to call too much. In poker, you call, raise or fold. If you raise, you’re the aggressor; you’re taking control and you’re giving yourself the chance to bluff and push other people out of the game. If you fold, you’re out. But if you call, someone else is doing the betting and you’re just being drawn along in a passive sort of way. That’s a big mistake that people make and it all comes down to fear.

It’s fine to be frightened the first few times you play. That’s normal. But if you’re going back for the 15th or 20th time and you’re still frightened, then poker is not the game for you and you should stop.