The last hurrah for Marky's Delicatessen 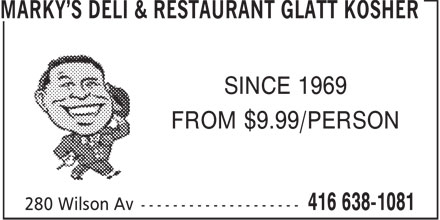 Jews don’t really do nostalgia. That’s to say, you don’t see them spending much time reminiscing about the good old days, because those don’t really exist, or they’re so far in the past—the Davidic Dynasty, for example, ended in 586 BCE—as to be bereft of any useful memories. When Jews think of the past, it is generally couched within the narrative of persecution and death, not reruns of Leave It To Beaver.

Nonetheless, there was a heavy air of sentimentality at Marky’s Delicatessen on Saturday night. The oldest strictly kosher restaurant in Toronto—an icon for Toronto’s Orthodox Jewish community—is closing shop Wednesday after 43 years in business. Young people—it was a mostly high school and university crowd—lined up at a strip mall on the northwest corner of Bathurst St. and Wilson Ave., waiting as long as 45 minutes for one last chance to sample chicken fingers, burgers, hot corned beef and pastrami sandwiches, maybe with a side order of kishka and a beef knish, both slathered in Marky’s gelatinous (sans gelatin, which is not kosher) house gravy.

It had been some time since this restaurant received such wide adoration. Ten years ago, lineups here were de rigueur—Jewish moms and dads, with requisite kids in tow, frequented on Sunday nights, and the aforementioned teens and twentysomethings made Marky’s the de facto Orthodox Jewish hangout Thursday and Saturday nights, when it would stay open till two in the morning, hours after all the other kosher establishments closed for the night. (Each Friday evening, of course, the restaurant would close, reopening Saturday night, in accordance with the laws of the Sabbath.)

In recent years, though, business died down, the result, owner Erez Karp, 53, posits, of tough economic times. “You have Jewish families making $200,000 a year, but because of the high tuition of private Jewish schools (which runs into the tens of thousands a year per child), people are going out less and less.” Five Kosher meat restaurants (kosher restaurants serve either meat or dairy menus, but not both, because of dietary laws) have closed in Toronto in the last nine months.

But this was not a night for gloom and doom. The scene at Marky’s was jovial—and diners, in the midst of one, so to speak last supper, were happy to reflect on what this place meant to them. The Yiddish word “heymish,” meaning homey, unpretentious, came up over and over again. So did that favourite Jewish theme—tradition! Sitting with a group of five friends, Ari Brodsky, 36, said, “What I like best about this place is my memories of coming here with my grandparents when I was a little kid.”

What was missing from many of these holy consecrations was any mention of Marky’s food. If you’ve eaten there, the shtetl-inspired kishka in particular, you surely know about the restaurant’s other tradition: The—how to say this with grace?—resultant protestations of the gut. While polishing off his meal, David Levine, 30, told me he was already counting the minutes until the burger now in his stomach would begin searching for a means of escape. He was only half-joking. (After encountering a shard of animal bone in a Marky’s burger sometime around 2006 or 2007, I myself stopped ordering that particular dish.)

Marky’s had other idiosyncrasies, too—like the pastel-themed menu, or the mysterious shuttered party room in the basement that seemingly never, ever hosted a party. It was a licensed establishment, but no one drank there. It was open for breakfast on weekdays, but no one I know ever ate there before lunchtime.

Marky’s, the last of the kosher delis in Toronto, had more character than every other kosher restaurants in Toronto combined. And it bore the unique quality of attracting a broad cross-section of Orthodox Jews—no small feat since that segment of the Semites seems to get off on internal division. They wouldn’t be caught dead in each other’s synagogues on Saturday morning, but they were perfectly content to occupy neighbouring tables at Marky’s on Saturday night. Ironically, it took what was, basically, a goyish greasy spoon to bring them together.