The period, reimagined: Are women finally ready for the cup?

A rebranding of the period in popular culture has spiked demand for a very old aid: the menstrual cup 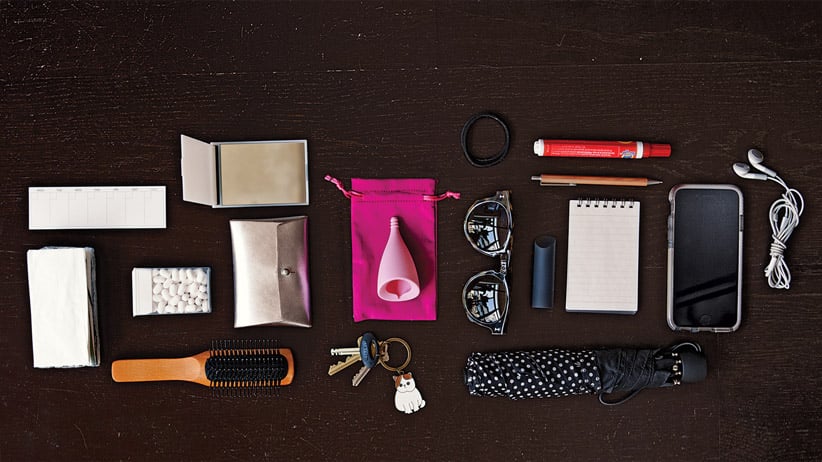 Of all the R-rated scenes in the blockbuster novel Fifty Shades of Grey, there was only one too graphic for the big screen. “Hold onto the sink,” the famous Mr. Grey orders. The book continues: “He reaches between my legs and pulls on the blue string . . . gently pulls my tampon out and tosses it into the nearby toilet.” Director Sam Taylor-Johnson didn’t elaborate on why the scene was cut. “It was never even discussed,” she told Variety. Fans were unhappy, not just for the omission, but also for the timid avoidance of the subject.

It comes, ironically, at a time when the period’s existence is suddenly being acknowledged by the mainstream. British tennis player Heather Watson casually blamed her loss at the Australian Open on “girl things.” Her comment opened the floodgates for questions—Do coaches track cycles? Must menstruating athletes wear Wimbledon white?—and led the Telegraph to declare, “The last taboo for women in sport has officially been broken.” Social media has helped things along. A Change.org “No Tax on Tampons” petition to Canadian Parliament currently has more than 55,000 signatures.

But nothing signals the reimagining of the period in the culture better than the Lily Cup Compact, a hot-pink, collapsible menstrual cup with a designer-accessory look. Its appearance is the result of one of the best-funded campaigns in Kickstarter history, late last year, to fund manufacturing. Almost 9,000 women in more than 50 countries—71 per cent of them first-time cup users—raised $325,000 in 40 days. “It was an unexpected, fantastic success,” says Amandine Pranlas-Descours, Lily Cup’s brand manager. Most surprising to her was the response of young women. “The cup is the choice of a new generation,” she says, citing a 13-year-old who wanted the cup in advance of her first period.

Menstrual cups have been available for about 80 years. The idea is simple: A flexible, bell-shaped cup, folded and inserted like a tampon, catches the flow rather than absorbs it. But, says Elissa Stein, author of Flow: The Cultural History of Menstruation, “It’s been a challenge not just to sell the actual cup, but the idea of the cup,” says Stein. The cup collects blood for 12 hours before it is removed, dumped and rinsed for reuse. “You have to touch yourself and see your blood,” says Stein. It requires a level of body-comfort many women just don’t have. “I could never bring myself to use it,” she says. “I’m afraid I’ll never get it out.”

The plain, utilitarian Keeper and Moon Cup, pioneering iterations of the product, were victims of what Stein calls “crunchy-granola advertising.” The Keeper is an unfortunate shade of mud brown. Today’s rebrands include the Diva Cup, a Canadian-made version in pastel packaging and a flowery carrying case; launched in 2003 and sold in health food stores, it finally landed on shelves in big pharmacy chains last year. All are benefiting from the new open dialogue. “When menstrual advertising started, the challenge was always to advertise a product without ever saying the words,” says Stein. They invented language (“sanitary protection,” “feminine hygiene”) and visual cues (white dresses, sterile blue fluid). None discussed periods as did two hilarious and groundbreaking tampon ads, “The Camp Gyno” and “First Moon Party,” that went viral last year by riffing on the “red badge of courage.”

Comedy may have exploded the ick factor, and more women are willing to give the cup a try. “The embarrassment factor is dissipating,” says Diva Cup’s brand manager, Daniela Masaro. Customers are now seeing the benefits of the cup: It’s cheap (Diva Cup costs $40 and lasts a year), eco-friendly (Lily Cup estimates sales to its first 9,500 customers saved millions of pads and tampons from landfills over the product’s five-year lifespan) and contains fewer dyes and chemicals than tampons. New York magazine’s The Cut asked last week if SoftCup is the secret to “mess-free period sex”—breaking yet another taboo.

“I believe the time is finally right,” says Kim Sedgwick, co-owner of Red Tent Sisters, an alternative gynecological clinic in Toronto. “The cup forces you to understand what’s happening in your body. That could have a profound effect.”