The technology trap: Should you give your kid a smartphone?

Parents are turning to devices to keep tabs on their children, affording the youngsters much-needed independence. Do the benefits outweigh the risks? 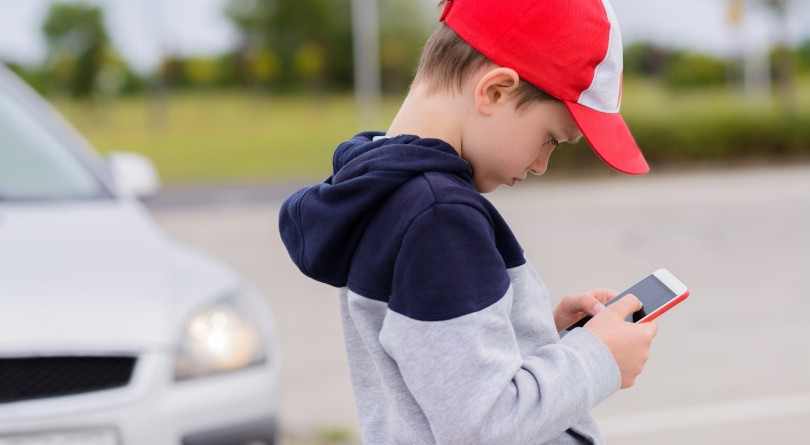 Caroline Kassabian tried not to freak out when her nine-year old son accidentally stumbled upon pornography as he perused the Internet at home on his iPad.

She was careful not to scream or rip the tablet from his hands. After all, he appeared as shocked as she did when he showed her what he’d found. Kassabian knew this kind of online discovery would force a conversation she was bound to have with him one day. She just hoped it didn’t have to be this early.

“I had to explain why people would film others doing something explicit on the Internet,” she remembers. “I wanted him to consider privacy and how thing are easily made public [online.]”

The web has forced her to open up a dialogue with her son on a wide range topics, like drugs and sex—conversations she admits she probably wouldn’t otherwise have had with him at this point in his life. And while her boy remains limited at home to television and iPad use on weekends exclusively, she’s currently grappling with the issue of her youngster, now 11, wanting his own smartphone like many of his classmates already have.

“He’s asked a lot and the answer is ‘no,’” she says. “But it’s hard because we use our phones a lot and he sees us using them.”

Kassabian has never really worried about her son’s independence in the real world, where he’s welcome to wander their Toronto neighbourhood with friends to play in the park or go to the movies without adult supervision. But what about when he obtains a similar level of independence in the digital world?

It’s question more and more parents wrestle with as they turn to devices as a means of affording their kids much-needed physical freedom, imagining it as a kind of electronic safety net should something go wrong. In Canada, according to a 2014 survey, one-quarter of Grade 4 children owned a smartphone; a 2016 U.S. survey from the marketing agency Influence Central found that the average American child gets his or her first smartphone at age 10.

Parents shouldn’t be shocked by the numbers, says Alissa Sklar, an educational consultant who runs Risk Within Reason, a consultancy project focused on teens and technology. “Every time you upgrade your phone, what do you do with your old device? You hand it to your kids.” But they can be forgiven for feeling trapped: devices seem a convenient solution, allowing adults to keep tabs on roaming youngsters at a time when kids’ footprints in the physical world are getting smaller; but by doling out phones, parents ensure children’s footprints in the digital world grow, with a host of new attendant risks.

“When you hand that screen, you’re handing them a portal to a world with no end—and one that’s not always appropriate, or kind, to kids,” says Sklar. “You can put them on YouTube Kids, but as soon as they’re old enough—which happens when they’re really young—they will explore on their own.”

READ: We need to stop worrying and just let our kids play

They don’t always need to work very hard at it. When parents hand their toddlers an iPad to watch an innocent episode of the popular children’s show Peppa Pig on YouTube,  for example, they don’t control the video that automatically pops up 10 minutes later in the video service’s queue. Last year, some content creators found a way to game the system with the tags and clever editing so that the next video, which appeared to be another episode of Peppa Pig, was actually an unauthorized knock-off—this one with Peppa taking a terrifying, needle-filled trip to the dentist that was the stuff of childhood nightmares.

At worst, parents might worry about the extremely rare occurrence of an online stranger managing to lure their child into doing something they’ll regret. But Sklar says a child is more likely to be hurt by peers through cyberbullying on Snapchat or Instagram—especially when the apps allow for anonymous commenters. And the irony of parents worrying about their children talking with strangers on the street is that, by giving them an iPhone, they are opening up their world to strike up conversations with a seemingly limitless number of people online, many of whom can remain anonymous.

“I think we need to have frank discussions with kids about the risks of anonymity,” Sklar says. “They’re more likely to be hurtful or say something racist or sexist.” And that includes one’s own child, who could be the ones hurting their peers with their online comments. Cyberbullies have parents too, even if the mom or dad is unaware.

Advocacy groups have tried in vain to counter the trend. A Colorado-based group called Parents Against Underage Smartphones, for example, last year proposed a ban in that state on children aged 12 and under from owning smartphones—an idea rooted in studies pointing to negative effects of unsupervised usage.

Excessive screen time does carry risks for children’s physical, developmental, and psycho-social health, according to the Canadian Paediatric Society (CPS). That could include sedentary behaviour, lower cognitive abilities and social isolation. But there are potential benefits when children access quality media content in proper moderation, such as early literacy, learning about antiviolence attitudes and increased physical activity with fitness apps.

“The best advice is for parents and caregivers to develop their own family plan,” says Dr. Michelle Ponti, chair of the CPS digital health task force.” “That will help reduce some the anxiety, guilt and risks. If you have a family plan with your kids on how they’ll spend their time online, you’re better prepared for when things don’t go as expected.”

In Ponti’s case, that means her kids aren’t allowed to have screens in the bedroom, the car or at the dinner table—though others parents should feel free to find what works best for them. Most importantly, parents need to be present.

Ponti and the task force she chaired devised a “4-M” strategy: minimize screen time; mitigate online risks, be mindful of screen time and model good screen time behaviour as adults—like not checking your smartphone at the dinner table if you don’t want your kids to later in life.

MORE ABOUT LET THEM PLAY: