Throwing a flag in the trash is frowned upon. Some people in Grande Prairie have taken it upon themselves to organize a proper burial each year for worn-out flags, complete with speeches and a lunch for guests. 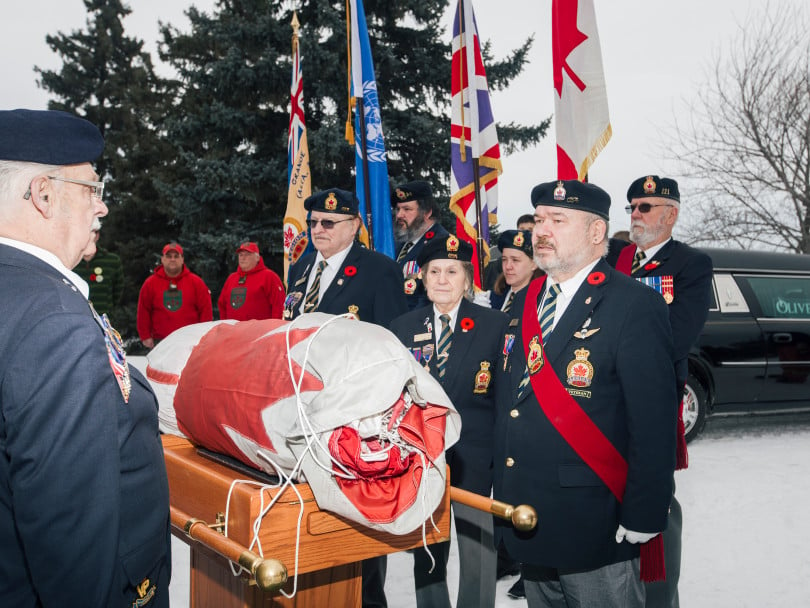 On a crisp, windy Prairie afternoon, a few dozen people, including city officials, religious leaders, Canadian Rangers, cadets and retired soldiers, donned their coats and made their way to a cemetery in northwestern Alberta, where they observed a moment of silence before watching a tightly rolled bundle of flags descend into a circular hole dug ﬁve feet into the frozen ground. The notes of Taps echoed from a small speaker as spectators bowed their heads.

It is a tradition that, if not unique to Grande Prairie, has set the city apart for the handful of years its residents have been doing it. It’s their own answer to a question few Canadians have paused to consider: what happens to flags when they’re worn out, tattered and no longer useful?

We seldom think about flags when they are flying, much less when they’ve reached their best-before date—odd, considering that thousands of maple-leaf flags alone flutter throughout the country on any given day. Consider this: there are roughly 300 Canadian cities with 10,000 or more people; in each, there are typically a dozen flags high on poles at municipal buildings, acting as omnipresent symbols of the places we call home. When we’re in mourning, we unite around lowered ones as gestures of respect. National, provincial, territorial, municipal and First Nations flags are woven into our identities.

With so many in use, it’s only a matter of time before a town is faced with getting rid of a few—or 80 per year in the case of Grande Prairie. But strict protocols exist to dispose of flags, inspired by generations of reverence for the founding of Canada and the troops who fought for the country.

So some people in Grande Prairie, a city of 60,000 about 450 km northwest of Edmonton, have taken it upon themselves to organize a proper burial each year for worn-out flags, complete with flowers, speeches and a lunch for guests. 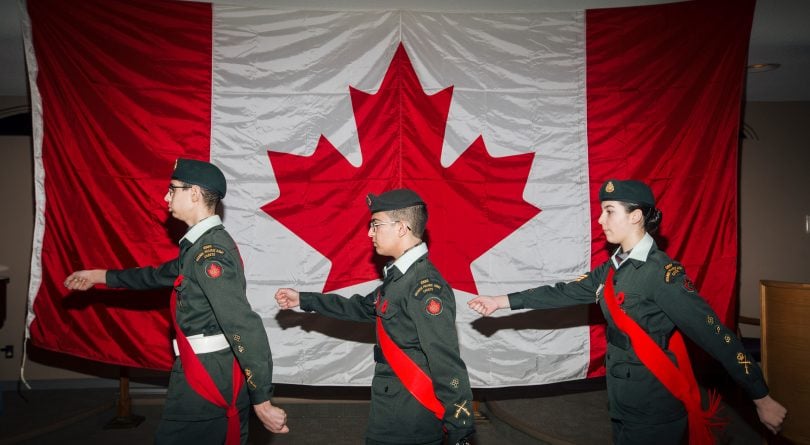 It started four years ago, when Liesa Peters, a community outreach coordinator at Oliver’s Funeral Home, was out for lunch with a member of the local Royal Canadian Legion. She saw a tattered flag and said offhandedly, “Someone should throw that in the garbage.” Her lunch companion was horriﬁed.

Peters learned the hard way that throwing a flag in the trash is frowned upon—to put it mildly. Proper disposal, according to military protocols, includes burning flags in private or ripping them into single-coloured shreds that do not resemble the flags they once were. Discarding them must not be a spectacle.

Laurel Hyatt, a Canadian Ranger in Alberta for the last 17 years and an attendee of Grande Prairie’s most recent flag funeral, says honouring the flag must prevail even when the piece of fabric becomes unusable. “Our flag is what our forefathers fought and died for, for the freedom we have today,” Hyatt says.

Peters’s lunch-time conversation four years ago inspired her to start a ritual of sorts: a funeral for retired flags held on or around Flag Day, which is Feb. 15. The ﬁrst year, 2016, Peters privately burned flags that were given to her by the city and local residents. The remains, though, were an unhealthy looking puddle of bubbling oil and smoke—residue of the mostly synthetic materials.

So she decided to expand the proceeding into something more public and symbolic. In the years that followed, news of the flag funeral grew, and people from in and around Grande Prairie began visiting the funeral home—the city’s oldest surviving business at 105 years—to drop off their frayed flags. During this year’s funeral on Feb. 13, the staff at Oliver’s gathered the 183 flags representing Canada, as well as its provinces and territories, that had been dropped off, rolled them up and enveloped them in one giant Canadian flag to hold them together as they went into the earth. 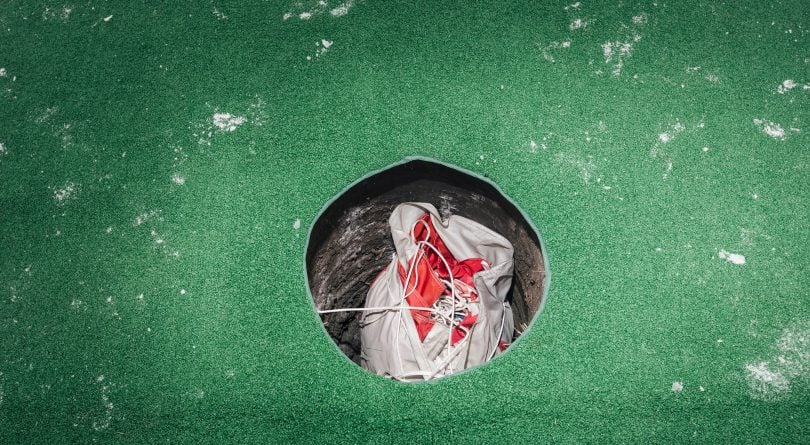 Afterward, several community leaders took to the podium to speak about the importance of the Canadian flag. Words like “respect,” “courage” and “unity” poured forth. There was a prayer to close the ceremony: “God in heaven, we have heard about freedom today. And you, Lord, are the foundation of our freedom, and we thank you for that.” Then everyone had lunch.

Hyatt acknowledged the complicated relationship some have with the Canadian flag. While it’s a symbol to many of freedom or remembrance of our fallen troops, it can also be a fraught reminder of the suffering Indigenous people have endured through Canada’s founding and evolution. The younger generation, he says, is losing touch with the pride and honour the flag is meant to ignite.

“I ask them, ‘Would you go and ﬁght for freedom for our country?’ ” he says. The younger folks, he observes, seem to hesitate. “They say they’d ﬁght for human rights.” Hyatt says he reminds them: “First of all, you have to be free.”

At Oliver’s, the flag goes up every morning and comes down every night. The funeral home was once a hardware store, but repurposed itself after 1915 and the onset of World War I, when demand for caskets grew exponentially. One hundred and ﬁve years later, Peters says, the home is simply doing its part to ensure the modern symbol of those veterans’ sacriﬁces, past and present, is honoured, and they are not forgotten

This article appears in print in the April 2020 issue of Maclean’s magazine with the headline, “A well-earned rest.” Subscribe to the monthly print magazine here.