To my partner, on your first Mother's Day

Andray Domise: 'You are exactly the mother I thought you would be. Black and beautiful. Fearsomely and wonderfully made. Just as our daughters are.' 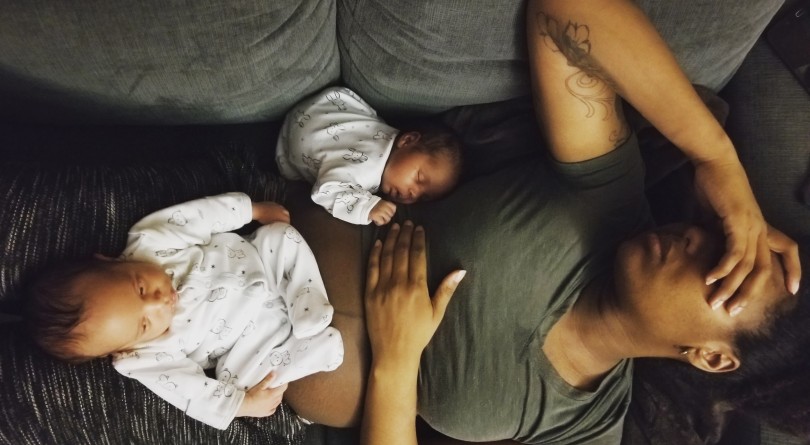 Just under a year ago, we were curled up together on the couch, watching a movie, and we made confessions to one another. I confessed that I wanted children, but I had anxieties about what kind of father I would be. Having grown up without my own father, could there be some essential secret I’d missed? Could I really give a child everything they needed? And then you quieted my worries by not only telling me I would be a great father, but that I would be a great father to your children. Not only did you want children too, but you wanted them with me.

I’ll never forget the moment we found out we were going to become parents. I was busy writing in my ramshackle office, you came in behind me, and asked me to swivel my chair around. “We did it,” you said. You showed me the pregnancy test, and there it was. A tiny blue cross. My birthday had just come and gone, but, well…how am I going to put this? Your monthly appointment sure didn’t. We said we wanted this, and in fact, we were trying. But that moment of confirmation made my stomach sink. Could we really do this?

In between our working hours were the doctors’ appointments, and in between those appointments were the quotidian things we did to reassure each other that we’d found the right time and the right partner. We laughed about the type of name we’d choose (Nigerian), whose looks they’d be better off with (yours), and whether they’d turn out to be a bookworm like me or an athlete like you. We fretted about how we would give them the talk, settling on being as straightforward and honest as possible because the body is nothing to be ashamed of. We also fretted about how we would give them the other talk. I don’t think we managed to settle on answers for that one. But overall, we had a pretty good plan.

“Are you kidding me?” That’s all I could think to say.

And then an early ultrasound blew that whole silly thing to smithereens. Because we were having twins.

You told me that, in the ultrasound office, you laughed uncontrollably when the nurse told you “there’s two in there.” That’s so much like you. But you know me. I sure as hell didn’t laugh. I burst into tears, right in front of you and everything. “Are you kidding me?” That’s all I could think to say. “Are you kidding me?”

My mother, in all her wisdom, always says “God never gives you more than you can bear.” You said the very same thing throughout the pregnancy. Where would we get the money? God will provide. Can we manage two children with our work schedules? God will show you the path. We put aside our fears, laying them in His mighty hands instead.

I kept those words in mind when we prayed together the night before we went to the hospital for delivery. All of the minor scares we had along the way, the weeks of bed rest that kept you indoors, the financial setbacks we experienced, none of that had been too much for us. How bad could a little surgery be?

Listen. The morning I found myself in the operating room, with that curtain draped over your chest? That was the most stressful thing I’ve ever experienced in my life. Not because I was having cold feet. Much the opposite, I was more committed to this than I knew possible. But there was also absolutely nothing I could do besides hold your hand, stroke your kinky hair, and let you know everything was going to be okay.

I didn’t know that. All I knew was that we had a bet concerning which one of us was going to be the one to cry when the girls arrived.

When we heard our firstborn cry out as she was lifted from your body, my eyes were dry. Yours were definitely not.

‘You are exactly the mother I thought you would be. Black and beautiful’

I honestly don’t remember having any emotions at all, in the operating room, aside from the wish that there were more of me to follow all of the doctors’ and nurses’ instructions. Do you want to take a picture? Come over here, take these, cut the cord right above the clamp. Back over here dad, the second one is on her way out. Hang on, mom is feeling nauseous, can you hold her head to the side please? It was as if every feeling had been flushed out of me. I couldn’t have cried, even if I wanted to. There were too many of you to protect, and all at once. But then you were being wheeled out of the operating room, while I held our daughters against my bared chest, and I knew our prayers had been answered.

Over the last nine months, I’ve seen a side of you that I never knew existed. You are sentimental in ways that you most certainly were not, back when you were striving for a place in the Canadian Olympic team. Back then, it was all training, work, and the occasional date when we had the free time. Now we’ve got a gallery of baby bump pictures to organize, postcards to send out, and two daughters that are rarely out of your arms. You are fiercely protective, always making sure I’m holding their heads just so, and keeping the bottle at the perfect angle for feeding.

You are exactly the mother I thought you would be. Black and beautiful. Fearsomely and wonderfully made. Just as our daughters are.

And that’s the secret that my father hadn’t been around to teach me, but my mother most certainly did. To find someone who complements your weaknesses while supporting your strengths, and to do nothing less than the same for them.

How much we’ve changed in a year.