We must defund the police. It is the only option.

Sandy Hudson: 'Dear white people,' through your inaction, you show us your inherent belief system—a Black life lived with dignity is unreasonable, and a liberated Black life is impossible. 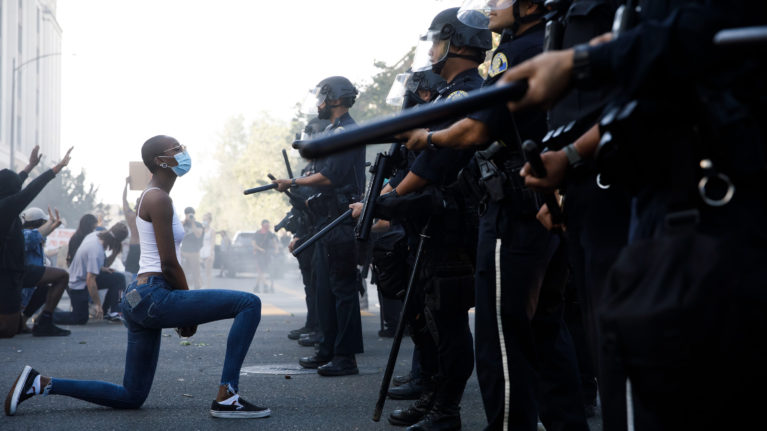 A young woman takes a knee in front of police officers during a protest in San Jose, Calif., on May 29 (Dai Sugano/MediaNews Group/The Mercury News/Getty Images)

I have a singular focus in my appeal to you today, and I need you to hear me. Our lives depend on it. It’s time to defund the police.

I believe that we can do better than the slipshod “safety services” the police claim to provide for us. I know many of you are unfamiliar with the everyday activities of the police. They do not patrol your neighbourhoods under the guise of providing “safety.” They do not stop you on the street under the pretense of “protection.” They do not kill your people with a casual and consistent regularity that announces, Your life is worthless.

When they killed 26-year-old D’Andre Campbell in Brampton, Ont., this year, the police proved to us that they are ill-equipped to provide emergency mental health services. When in early 2018, bystander Bethany McBride recorded a Black boy being brutalized by fare inspectors in Toronto, police showed that they could not be trusted to help patrol our transit systems and campuses. In 2016, when an off-duty Toronto police officer and his brother beat Dafonte Miller so badly that they took his eye, police showed they cannot be held accountable for their actions. And when they refused to properly investigate the death of 26-year-old trans woman Sumaya Dalmar in 2015, the cops confirmed, yet again, that our deaths are not taken seriously.

Perhaps to many of you, defunding the police sounds impossible. But Black people will continue to fight against accepted wisdom: we must defund the police; it is the only option. Through your inaction, you show us your inherent belief system—a Black life lived with dignity is unreasonable, and a liberated Black life is impossible.

White people, I need you to look beyond the limitations of your own making and understand that the possibility of my liberated existence requires more than a retweet, an opinion piece, and even more than attending a demonstration. That’s the easy way out.

How can we expect an institution that has failed all attempts at reform to suddenly refrain from targeting, maiming and killing Black people because of a new police chief, mayor or policy? I am asking you to refuse an approach to safety that is simply good enough for you, and absolutely unjust to me.

I need you to believe that, for Black people, this maddening cycle of trauma and despair is not inevitable. It only becomes so when we fail to evolve.

Sandy Hudson is one of the co-founders of Black Lives Matter Toronto and a law student at UCLA.