Why doesn't Kate recycle her clothes?

After all, the royals are pros when it comes to recycling outfits

Look through the websites devoted to the clothes of Kate, duchess of Cambridge—such as Cambridge Chic and What Kate Wore—and, after marvelling at the way they are able to identify every part of her wardrobe, right down to who designed what belt, there is one striking observation: she doesn’t recycle outfits worn at official engagements. Now, before I’m inundated with angry emails, let me be very precise: I know she re-wears outfits at private functions such as weddings, and has worn older clothes at public functions. I’m talking about recycling outfits from one official engagement to another. And that she hasn’t done. I’ve checked the Court Circular, the palace record of these events, then cross-referenced engagements with outfits. No repeats.

Why? Susan Kelley of What Kate Wore believes it’s because she hasn’t been on that many official engagements, saying, “I don’t expect to see [repeats] until late this year or next year, depending on the schedule.” And Ella Kay of Cambridge Chic thinks one of the reasons could be that Kate is “keenly aware of the attention she gets as a result of her wardrobe” and by wearing something different to each engagement she “shines a spotlight on the causes that she supports.”

With just over a year under her belt as a member of the royal family, Kate obviously doesn’t have an extensive wardrobe, like other Windsor women. (And you can bet that if she were to go on a mammoth shopping spree there would be complaints about that!) Still, the fact she hasn’t repeated even once is odd for this family, which has elevated recycling to an Olympic sport. The Queen has often been spotted wearing the same outfits over the years.  Princess Anne is the all-time champ; she repeats so often and for so long that no one batted an eye when she turned up at a family wedding in 2008 wearing the same (ugly) dress she’d worn to Charles and Diana’s nuptials 27 years before. And kudos to her for fitting into the same dress three decades later.

Yet given her wardrobe is packed with clothes in a variety of shades of beige, blue, grey and blue, surely Kate could have mixed or matched at least one outfit. Perhaps she needs to take a few more lessons from the Queen. The regal pink outfit Elizabeth II wore at the beginning of her Diamond Jubilee tour in March—when she, Kate and Philip went to Leicester—got a repeat showing in May during a tour of Sherbourne.

UPDATE: From my writing to Kate’s ear! A mere 24 hours after writing this post, Kate finally recycled an official engagement outfit today, when she wore the lovely pink Emilia Wickstead dress at a Buckingham Palace garden party that was last seen 11 days earlier at the Diamond Jubilee lunch for foreign monarchs. 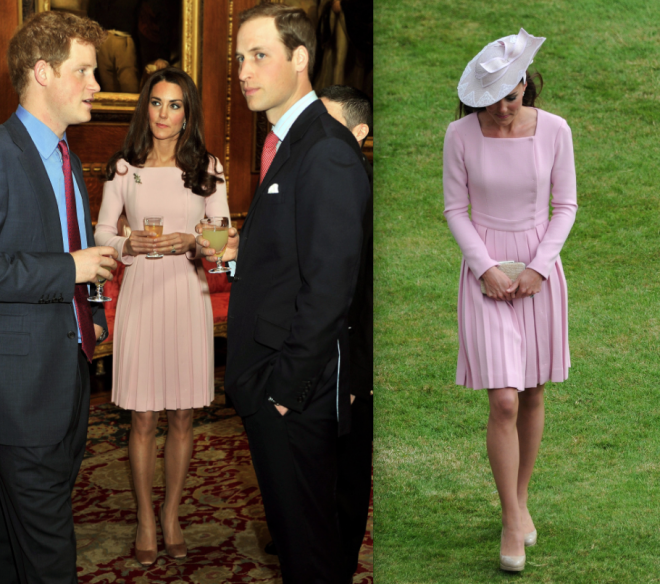