Vancouver's foul-mouthed nine-year-old rapper is moving with her mother to L.A., saying, 'You need money to, like, support your family. Everyone wants to live a good life' 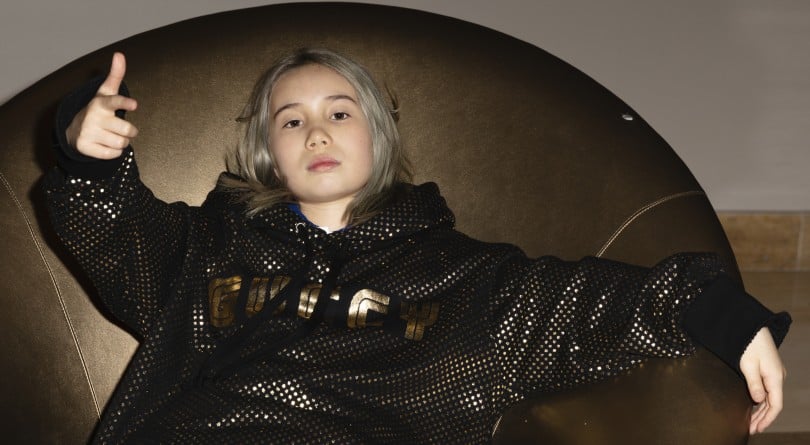 Lil Tay, a viral social media star, poses for a portrait at in Los Angeles, California on May 22, 2018. (Photograph by Philip Cheung)

One day earlier this month, Lil Tay sat behind the wheel of a white Rolls Royce, her nine-year-old frame barely tall enough for her to see over the dashboard. She drove forward a few feet, lurched to a stop and hopped out. “All y’all grown ass men hating on a nine-year-old. I ain’t got no license, but I just dropped 400 racks on this car, bitch,” she shouted at a camera recording the diatribe for her 2.1 million Instagram followers. A large dog panted nearby in the front seat. His name is Swaggy and he has more than 800,000 Instagram followers. Lil Tay went on to excoriate those who accuse her of being fake and exaggerating her wealth. “If I rented my cars, do you think I be doing this?” Lil Tay gave the Rolls Royce a few swift kicks.

The short video has racked up nearly seven million views. In the past two weeks, Lil Tay herself has scored coverage by the CBC, National Post, Vice, South China Morning Post, and Newsweek. She is on the radar of gossip empire TMZ. Lil Tay could be described as an internet celebrity of sorts. In her online videos, she swears, flashes stacks of cash, poses in luxury cars and homes, and references drugs and trap houses. She is the self-described “youngest flexer of the century.” Recently, she appeared with rapper Chief Keef and collaborated with Jake Paul, a 21-year-old with 15 million YouTube subscribers. Together, they showered the ground with dollar bills next to a Lamborghini. Her abiding ethos is the wanton attainment and celebration of wealth.

When Lil Tay first entered the public consciousness a couple of weeks ago, her team mostly avoided commenting to reporters. (It’s not entirely clear if this was intentional or just due to disorganization.) Now, however, Lil Tay and those supporting her are prepared to capitalize on the attention. The family is moving from Vancouver to Los Angeles, where stars are made.

A representative named Diomi Cordero has arranged a phone interview with Lil Tay and her mom while the group rides through L.A. not in a Lambo, but in an Uber. “Why I started was ‘cause I wanted to start motivating people and I wanted to inspire them to accomplish their dreams,” Lil Tay says of her online presence. She is more or less in character, explaining that she used to be broke, worked hard and is now rich. It feels rude to poke through the Lil Tay creation myth because, well, she’s nine. So one has little choice but to go along.

She’s not bragging in her videos, Lil Tay says, but showcasing her successful lifestyle to encourage others to do the same. “You need money to, like, support your family and you need to be able to afford things. Everyone wants to live a good life,” she says. Brand sponsorship offers, which is how online influencers make money, have been rolling in. “I’m just gonna pick the ones that pay more,” she says. Lil Tay is very pro-swearing. “It’s something positive because it helps me get pumped up and motivated to get things done throughout the day,” she explains.

RELATED: The sunny side of the mic: Rap gets positive

Lil Tay doesn’t really have any hobbies since she’s too busy working on her career. Right now, she’s focused on music and her representative says she’s working with a number of producers and songwriters. One track was released under her name last month called “Money Way.” (Sample line: “All you are trash / Yeah, I be counting my stacks.”) Everything has been her choice. “I’m independent,” she says.

Cordero passes the phone to Angela Tian, Lil Tay’s mom. Tian is reluctant to say much beyond what sound like prepared remarks. “She is the hottest thing on the internet, worldwide,” Tian repeats a couple of times. The bid for stardom was all Lil Tay’s idea, Tian says, and no one is directing or controlling her. The National Post obtained WeChat messages Tian had exchanged with her former boss, in which she described her teenage son as the “creative force” behind Lil Tay’s videos. Tian says that’s not true. “She’s a very smart girl,” she says. Lil Tay can sing, dance, act and write, according to her mom. She isn’t alarmed by the language her daughter uses, although dropping the N-word in a video was a mistake. “She will never use that word ever again,” Tian says.

LIL TAY DROPPED OUTA HARVERD AND INTO A RARI ALL THESE GROWN ASS MEN REALLY HATING ON A KID Btw while ur haters typing on ur keyboards, I’m riding in my RARI keep hating I’m stil rich BICH! #GUCCIGANG

Lil Tay, who is home-schooled, is not old enough to create her own Facebook or Instagram profile (the minimum age is 13). An obvious question is whether she’s a little too young for all of this. “She’s a child star,” Tian offers in response. She does not elaborate, and the statement hangs in the air. Lil Tay’s celebrity is, apparently, a fait accompli.

Tian herself has become a figure of some interest. It was reported that a $3.6-million penthouse used in one Lil Tay video did not actually belong to the family. It was a listing where Tian had once held an open house, and the owner later complained to the real estate brokerage. Tian’s boss was also surprised to find that his red Mercedes convertible was used in a video without his permission. She has since left the company.

“I didn’t get fired,” Tian wants to make clear. “I resigned for my daughter’s career and her bright future.” She’s not interested in talking about anything that happened at her former real estate firm, either. “I don’t want to deal with all these questions any more,” she says. “Can you please help out my daughter’s career more?”

The phone soon goes back to Cordero. “I am managing her career,” he says when asked about his role with Lil Tay. Cordero is 25-years-old and says he’s worked with influencers and celebrities in the past, such as an Australian group called the Janoskians. “I’ve been associated with Cameron Dallas’s team,” he says, referring to a YouTuber-turned-actor. Cordero also opened a SoundCloud account a while back that appears to feature at least one original song. It’s called, “I Eat Pussy.” (Cordero later took the account private).

Cordero later backs off the whole manager title and says he’s more of an advisor. (Another consultant was previously repping Lil Tay as recently as Monday, but Cordero says that guy is no longer involved.) Lil Tay’s career is shaping up to have longevity, he insists. “I believe that if done correctly, this will open many doors in the entertainment industry and allow her to go in many different directions,” Cordero says. “Her appeal is shock value, being a young flexer. And the only way to remain like that is to be able to create content constantly,” he says. “If you don’t have a six-month plan to see what’s next, then you will lose it all.”

The comments below any given Lil Tay video are often toxic—a mix of petty insults, personal attacks and overt racism. “Your the reason cancer exists in this world,” someone wrote recently. Lil Tay and her mom say they don’t pay attention to what people are writing in response to her videos. “She does get a lot of hate, but you must understand in social media, the more comments, the more likes, and the more you see an account, the better it is for the account,” Cordero says. “What I’ve learned is if you just post the content, and never look at the comments, then you have nothing to worry about.”

By this point in the conversation, it is hard to feel anything but a low-grade depression at what the quest for fleeting internet fame has become. The attention on Lil Tay (including from this article) may help accrue more followers and a coveted brand sponsorship, but it will also propel a child farther down a very strange and potentially unhealthy path. Tian brushes aside these concerns. “Every parent needs to worry about their own child. I’ll worry about my child,” she says. “She’s a star now, and wherever she is, I will be beside her.”