Losing a war criminal in Canada's access to information system

Ottawa cared even less about our ATIP request than it did about finding one of its most 'Wanted.' And that wasn't much. 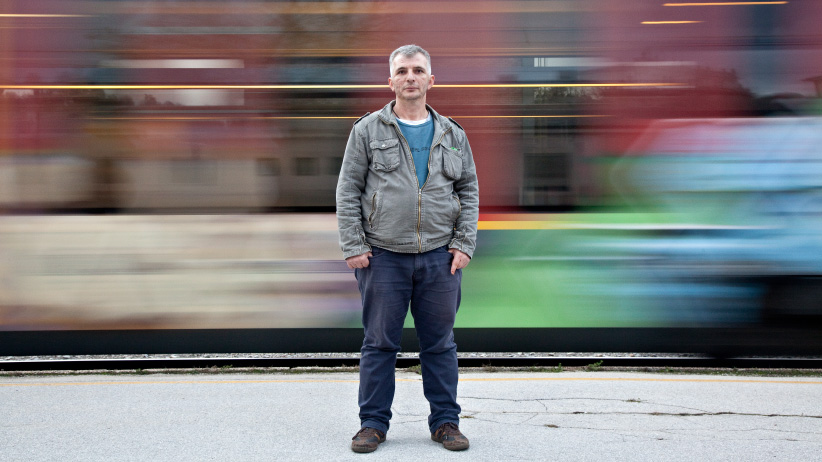 Dragan Djuric was photographed in Celje, Slovenia in various locations including at the train station and a few shots with his Sloven and ex-Yugoslav friends in the bar where he’s a regular.

Nearly four years ago, Maclean’s tracked down a fugitive: Dragan Djuric, a suspected Serbian war criminal. At the time, his mug shot was one of dozens featured on an FBI-style “Wanted” list launched by the Canada Border Services Agency (CBSA)—a Stephen Harper-era initiative aimed at flushing out illegal immigrants who vanished before they could be deported.

A failed refugee claimant who supposedly disappeared in the early 2000s, Djuric’s trail had gone cold after the border agency said it exhausted every last lead in his file. Maclean’s managed to find him in a matter of a few weeks, thanks to some obvious clues left behind in his Federal Court records. Living in Slovenia—not somewhere in Canada, as Ottawa believed—Djuric was actually quite happy to talk to a reporter, anxious to prove he wasn’t hiding at all.

After the article was published, Maclean’s went looking for something else via the Access to Information Act: internal CBSA records discussing Djuric’s case. Only now, two and a half years after filing that ATIP request, has the agency handed over the documents.

Although the records contain some newsworthy revelations—including the fact that the Harper Conservatives quietly removed 15 other names from the Wanted list after the article appeared—the disclosure says a lot more about the dysfunctional state of Canada’s access to information system than it does about missing war criminals. Simply put, Maclean’s had a much easier time locating a fugitive than it did obtaining government documents about said fugitive.

“The access system is clearly broken,” says Fred Vallance-Jones, a journalism professor at the University of King’s College in Halifax, and project leader of an annual freedom-of-information audit. “If you don’t have the ability to get information reasonably promptly, then all we know about our government is what the government is willing to tell us in press releases and news conferences. And we all know that the government doesn’t always give the full picture.”

Here is a somewhat fuller picture, according to the long-overdue documents.

On the morning of Dec. 23, 2013, Maclean’s informed the CBSA’s media relations department that the magazine had located one of its most-wanted. Among our questions, we asked the agency confirm Djuric’s version of events: that he’d been deported in 2003, and never should have been placed on the list in the first place. We also asked the CBSA to detail its efforts, if any, to locate this supposedly missing man.

“This one will cause problems,” one media relations officer wrote to a colleague, referring to our query.

By that same afternoon, efforts were already underway to purge Djuric’s information from the Wanted page. As the documents reveal, the CBSA had completed an internal audit the previous month, concluding that some people featured on the public list—Djuric included—were likely not in Canada any more and should therefore be removed from the site. His mug shot disappeared from the web page on Dec. 27, the same day the agency responded to Maclean’s questions with a brief written statement: “Mr. Djuric’s case has been reviewed and his personal information will be removed from its ‘Wanted’ website.”

RELATED: Why we’re all losers in Ottawa’s war on data

The article was published online on Jan. 3, 2014. That afternoon, Ken MacKillop, director general of the CBSA’s communications directorate, forwarded a synopsis of the story to fellow senior bureaucrats. “It is not very complementary [sic] to the Program or our efforts to locate Mr. Djuric,” he wrote.

Ten minutes later, Geoff Leckey, the director general of enforcement and intelligence, chimed in. “Can you tell me what the story is here?” he wrote to colleagues. “What is the Region involved? Was he really removed 10 years ago and it was not on his file?”

By Jan. 6, another enforcement officer had cobbled together “what we have been able to find concerning the individual that was subject of the MacLean’s [sic] article.” What she wrote about Djuric is completely censored, however. Why this man was featured on the Wanted site—and why the CBSA couldn’t locate him, when a journalist could—remains a mystery.

What’s clear is that the article prompted officials to remove 15 other names from the list. “As a result of our audit that was conducted on the ‘Wanted by the CBSA’ archive page, and in light of the recent MacLean’s [sic] article, we would like to notify you that the following cases no longer meet the criteria to remain on the website,” says a draft email to Susan Kramer, director of inland enforcement operations and case management. “The highlighted case is of the most urgency for removal.”

Maclean’s first asked for these internal records in March 2015, paying the requisite $5 fee under the Access to Information Act. By law, the CBSA had 30 days to process the request; the department asked for a 30-day extension, pushing the due date to May 2015. The records finally arrived in the mail this September—28 months late.

Asked for an explanation, the CBSA says the agency “has experienced significant increases in the volume of requests for information, which has resulted in an increase in the number of delayed responses.” A spokesman also says the service has earmarked $714,000 to help clear the backlog of old requests. “The CBSA recognizes the importance of providing timely access to information in accordance with its legislative obligations,” the agency wrote, in a prepared statement.

The Djuric files come to light just as Justin Trudeau’s Liberals have introduced a new bill, C-58, aimed at modernizing the Access to Information Act—a bill many critics contend will actually make it more difficult for the public to pry internal records from Ottawa’s hard drives. At this point, says Vallance-Jones, processing times can’t get much worse; his latest audit, released in September, found that the feds respond to just 27 per cent of requests within the Act’s 30-day deadline.

“If you can stretch it out and drag it out until the reporter or the lobby group or the Opposition can no longer make much use of the information, you have essentially neutered the Act,” he says. “It becomes access to history.”