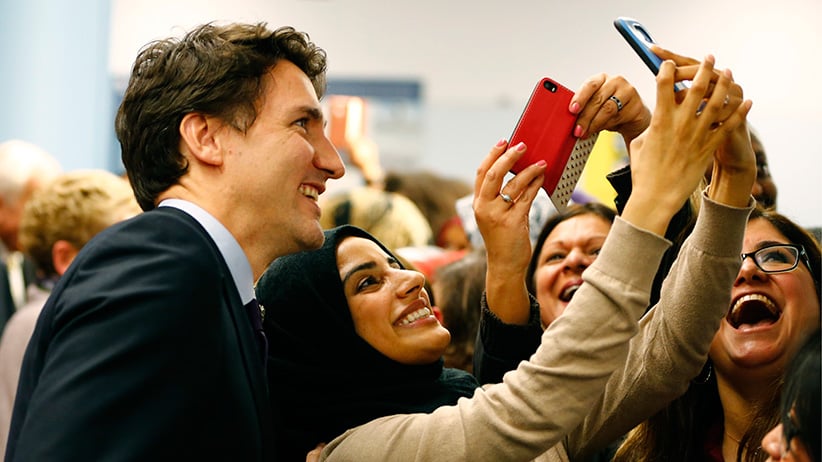 On fakery and feminism

In my travels worldwide, I’m proud to say that Canada is held up as a nation that strives to embody progressive, fair, and inclusive principles. Of course, there’s still more to do, and any policy agenda takes time, but Justin Trudeau’s vocal commitment to advance gender equality and diversity should be applauded and not minimized (“Not so feminist,” National, Sept. 19). Trudeau is well positioned, as a senior male leader, to publicly call out that women still do not enjoy equal rights in society. This sends a powerful message to other leaders to act. I appreciate Prime Minister Trudeau’s gender-balanced cabinet and his declarations to create policies that will build inclusive environments, as these are both critical steps in the right direction.

“Tone at the top” is crucial, whether it is a CEO or a prime minister, if we want our daughters to have the same opportunities as our sons. It took 94 years from Agnes Macphail being the first woman elected to sit in the House of Commons in 1921 for a Prime Minister to set the right tone by appointing an equal number of men and women to the federal cabinet. We should applaud Prime Minister Trudeau for this action.

Why is anyone surprised that Prime Minister Justin Trudeau appears to not support women? His very first move as Prime Minster was to limit women to 50 per cent of his cabinet. We need the best people in cabinet regardless of whether or not the cabinet is all women, all men or some combination.

Turn down the Trudeau

In your Aug. 22 issue you write about “How to market Justin Trudeau” (National), then on Sept. 12 you voice concern that perhaps he is overexposed (“How Trudeau works,” National). But wait! There he is again in the article on the “tragically hyped” band (“Seven love songs, Tragically Hip, Sept. 12). Do you actually read what you print? Those who care about the way our country is being run don’t want to see photos; we want to see action, so let’s get the boy back to work. The media needs to start looking at what he is doing while you are racing around photographing him.

The ridiculous scenarios used by Evan Solomon in “Passing the Canadian values test” (Sept. 19) provide nothing but immature ridiculing of Kellie Leitch’s proposal for new standards of immigrant testing to obtain Canadian citizenship. Canadian values are not to be mocked, because we have many values that are being extinguished with increasing immigration, starting with the expectation of respect toward women. North America and Europe are reviewing and tightening their immigration reviews. Government’s first responsibility is to provide safety and defend their country’s borders. Kellie Leitch ought to stick with her principles and fight for what she believes in, because the terrorist situation is not going to disappear anytime soon.

Whenever I hear the “V” word I start to squirm. What is a “value”? What, pray tell, is a “Canadian” value? Is saying “sorry” when coming within four metres of someone’s personal space a “value”? What is a “Canadian” value as opposed to a New Zealand value, a Norwegian value, a Peruvian value, an Icelandic value? Is the “V” word just one of those things that sounds good, means nothing? What is an “anti-Canadian” value? Or is it just one of those mushy terms intended to define “us” as opposed to “them,” whoever they are? Any politician who plays the “V” card is instantly disqualified from getting my vote. It’s too easy.

Justice Robin Camp (“Above the law,” National, Sept. 26) would not pass my Canadian values test. Apparently he did pass Stephen Harper’s. He elevated Camp to the federal bench after Camp’s incredibly insensitive comments to a rape victim, where minimal due diligence would have found them. Harper clearly chose his Conservative values over essential Canadian values: compassion, respect, integrity.

Reading Scott Gilmore’s “The great Canadian lie” (National, Sept. 19), I would certainly get the impression that Canada’s North is indeed a desolate place. However, having lived there for the better part of 25 years and being involved in a variety of economic development sectors I can assure you it is not. The article said there is no commercial fishery. That is incorrect. There is a growing fishery and many of the boats are now Inuit owned. The arts and crafts sector produces more than “soapstone souvenirs.” It is world-renowned, and a significant amount of Inuit art is sold outside the North. Tourism in Nunavut alone adds over $40 million to the territory’s economy and the other two territories even more than that. It needs to be remembered that in as little as two generations Nunavut has gone from living completely off the land to the jet age. That in itself is an amazing accomplishment. The North has extraordinary potential yet unrealized. What is needed is help in housing, training for opportunity and the perception to not be cast as somewhere that no one would ever want to live, work or visit—as it is in this article.

It may not be clear how Britain will manage its divorce from an abusive EU partnership, but it is the right thing for them (“Clear as mud,” International, Sept. 19). The EU banks are failing under the weight of the paper they print. They suffer from massive debts that can never be paid down. They have too many loser nations supported by too few winners like Britain and Germany. There are a number of dysfunctional governments. These countries with their 25 to 45 per cent youth unemployment cannot survive outside the EU and are draining the resources of all. Their massive debts keep growing with no plan on how to fix it. Another failure is their wonderful idealistic and noble act of open borders, inclusiveness, welcoming to all, which works for the honest and is exploited by others. Without filtering, vetting, checking and protecting these honourable ideas the EU has become a cesspool of corruption, underworld activities and terrorism. Hardly a place that a respectable country like Britain should belong.

Michael Barclay’s Tragically Hip piece (“A duty to celebrate,” Tragically Hip, Sept. 12) was excellent. On Aug. 22, I drove from Montreal to Kingston, without a ticket, sitting there the entire day in the blazing sun, hoping upon hope that there would be another ticket drop and that somehow a scalper would bring the price below the two grand they were asking. That never happened. By the time doors opened, scalpers were pacing the area like caged tigers bellowing to buy a ticket for five grand, so I had to settle for the CBC version broadcast in Springer Market Square, which was far better than being shut out completely. For me it was not the Canadiana references in Gord Downie’s lyrics that got me, it was the human ones. Every time I hear him sing the last lines on “Last Night I Dreamed You Didn’t Love Me” with such vulnerability, my tears well up—inexplicably, but consistently. The Tragically Hip experience is about relationships, heartbreak, intensity of life, lived to the best of our ability every single day of our lives. That, to me, is bigger than Canada.

All the young dudes

The plight of young men in Canada’s workforce, as noted in the Sept. 19 Editorial, would be solved if our Prime Minister would accept his responsibility and approve the various energy pipelines. The installation, and maintenance of pipelines—along with increased oil production and the required infrastructure—would provide youth employment and economic benefits for all levels of government. Without those benefits, we face high taxes and high unemployment that will provide the breeding ground for our own Donald Trump. When one can’t feed their family or provide the necessities of life, the environment is no longer a concern. The most important issue facing Canada is the economy. With a healthy economy all problems including climate change and the environment can be solved.

Laurie Gough, in her heartbreaking account of her son’s struggle with obsessive compulsive disorder (OCD) and her efforts to understand it (“Saving Quinn,” Society, Sept. 19), observes that the “OCD monster hates visitors.” Sociological and anthropological research on our evolutionary past puts emphasis on our cultural and social inventions. The universality of religion in all past cultures points to the comfort and meaning we get when we ritualistically and collectively commune with our dead. One possible response to OCD is to live and mourn in ways that lift us beyond ourselves into this universal world.