I grew up in Iran. Here’s why the Mahsa Amini protests felt like a full-circle moment for me.

“The best way for Canadians to help is to remember and amplify. The Iranian government wants the world to forget what it’s done.” 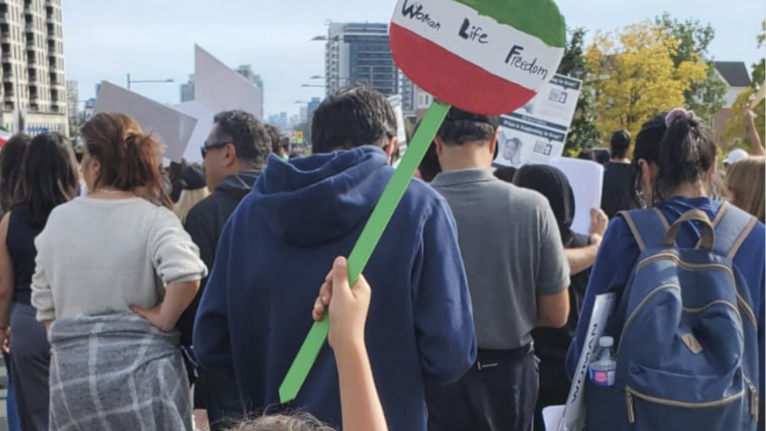 More than 50,000 packed the streets of Richmond Hill, Ont. (Photo via Twitter @kshahrooz)

On September 16, 22-year-old Mahsa Amini died in custody after being apprehended by Iran’s morality police. She was accused of breaking a modesty law that requires women to dress modestly and wear a headscarf.  Hours after she died, anti-government protests began in Tehran and spread to over 50 cities across Iran. Women cut their hair and burned their headscarves in solidarity, and there has been an outpouring of global support, too. Kaveh Shahrooz, an Iranian lawyer and human rights activist, helped organize a protest in Toronto. Shahrooz spoke with Maclean’s about what this historical moment means for Iran, and for those living in the diaspora.

“I was born in Iran, and I lived there until I was 10 years old. When I was a child, my family would take me to see various prisons, telling me about the political prisoners that were kept there. We had a personal connection to them: my uncle was executed along with thousands of other political prisoners during Iran’s 1988 mass executions. We moved to Canada in 1990.

While at law school, I decided to write my thesis on the 1988 executions, since there wasn’t much documentation of it at the time. It was a difficult choice: either publish my thesis and never visit Iran again, or let the injustices of the regime fade. I published it, and have been working in human rights ever since. I still have a lot of family in Iran and I can’t visit them anymore because of my activism, but I’ve done this for them and for so many others who want to see Iran become a better place.

Day 17 #IranProtests2022 turned #IranRevolution2022
This is #Isfahan University of Technology.

Along with other Iranian-Canadian activists, I helped organize a protest for Mahsa Amini in Richmond Hill on October 1. We thought that a few hundred people would show up. Police told us they estimated over 50,000 people marched that day.

I’ve worked in human rights for over 20 years, and at times it can feel like a slow grind. Seeing so many people that day felt like things were changing, and that it paid dividends in some way. I was so honoured to be able to share that moment of optimism with my children. Being with them at the protest felt like a full-circle moment: I showed them what activism and resistance looks like in the same way that my family showed me what it meant when I was a child.

Below is my son.
Ever since I was his age & stood w/ my mom outside Gohardasht prison to see my uncle, I dreamed of a day when thousands would fight this regime.

Thank you, Richmond Hill, for making that dream come true. Victory is near.
♥️#زن_زندگی_آزادی #مهسا_امینی pic.twitter.com/HZsW5RubNT

I hugged so many people that day, as we expressed sadness and grief over what had happened, while also telling each other that we deserved better.

Among the many signs seen at the march were a few memorable ones that also appeared at other marches around the world. People carried a version of the Iran flag before it changed in the 1979 revolution, signalling a desire to reconnect with and return to the culture that the diaspora cherishes. Others carried signs with the phrase “Woman, Life, Freedom”—it’s a phrase that rejects the Islamic Republic in its entirety, an antithesis to the death, oppression and patriarchy that exist in Iran today. Another interesting thing I saw on signs were the names of various institutions that are part of the so-called “Iran Lobby”: entities and people that support and have ties to the current regime. These signs told people not to support them.

We knew that having high-profile leaders at the protest would bring more awareness to the cause. The president of the Ukrainian-Canadian Congress attended, and we also invited the leaders of the PC, Liberal and NDP parties. Jagmeet Singh acknowledged our invitation, but attended a similar rally in Vancouver, while Pierre Poilievre accepted our invitation and attended the march in person. Prime Minister Justin Trudeau and Foreign Minister Mélanie Joly didn’t acknowledge our invitation.

Their response is similar to the Canadian government’s overall response to the Iranian regime: inadequate. Any action they’ve taken so far—whether it’s been to list the Islamic Revolutionary Guard Corps as a terrorist organization or to sanction officials and members of the morality police—hasn’t been good enough. Politicians will vote on motions and pay lip service, but they are slow to act. It makes us feel that our lives are worth a little less.

The best way for Canadians to help is to remember and amplify. The Iranian government wants the world to forget what it’s done. We need to make sure that this story stays in the public consciousness so that it stirs people—and their governments—to act.”

—As told to June Findlay