After being nearly paralyzed in an ATV accident, he took up cycling, organizing races and a bike program for kids 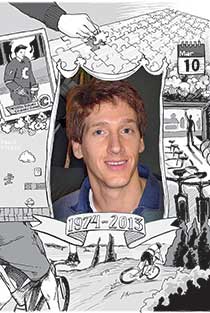 Mario Pierre Théoret was born on Dec. 7, 1974, in Alexandria, Ont., the second of two boys. His father, Guy, was a projectionist who owned the only movie theatre in town. The smell of popcorn filled their home as Guy kept a machine in the basement so he could start the first batch of popcorn every afternoon before heading off to the theatre after supper. Mario’s mother, Denyse, was a hairdresser who would try to make Mario’s straight hair curly. After one perm, Mario hated the curls so much that he cut them off himself.

Growing up, Mario was quiet. He loved to work on 5,000-piece puzzles or collect Calgary Flames hockey cards—Theo Fleury was a favourite player—that he would meticulously organize. “If he had a card that he liked, he would get a huge plastic case with four screws to make sure they stayed in mint condition,” says his older brother, Roch. When his parents bought the boys the first Nintendo system, Mario became hooked. “He actually played Mario Bros. for two days, and his objective was for the score to go 999,999,” Roch says. “He did that, took a picture of the TV and mailed it to Nintendo to show that he had ‘rolled the counter.’ ”

After high school, Mario went to Ottawa’s Algonquin College, where he studied electronics engineering, and then electromechanical engineering. When he moved away from home, he didn’t like the idea of a stranger cutting his hair. “When he started having this big ball of hair on his head, then everyone knew it was time to visit mom,” Roch says. After graduating, Mario started working with Pylon Electronics. Still an avid gamer, he would take vacation days every time an important video game came out.

In 1999, the two brothers went ATV riding. An accident caused both to fall off and Roch landed on his younger brother, fracturing one of Mario’s vertebrae. The family worried he might never walk again, but Mario recovered and, in the process, left gaming behind for a new passion—cycling. He joined a club and started buying all the necessary gear. “He was always organizing events,” says Cat Weaver, a fellow Ottawa cyclist. When she first showed up to join the group and was the only person without a suspension for her bike, Mario created a game whereby others could win prizes for riding certain paths. Cat won a suspension fork for her bike. “That was clearly rigged by Mario,” she says.

During that time, Mario also found a new job with Iridian Spectral Technologies. If it wasn’t going to rain, he would bike to work. As an uncle, instead of birthday gifts, Mario would give his nieces and nephew coupons promising an entire day dedicated to outdoor excursions such as cycling, snowshoeing and hiking. Mario also jokingly celebrated March 10 as “Mario Day,” because the date on some calendars looked like “Mar10”.

When Cat’s children entered high school and their classmates wanted to attend a mountain bike race, Mario helped her organize a bicycle-lending program so that 25 kids from the school could partake in the event. After that, the children wanted to continue to ride, so Cat decided to start an after-school program for loaning bikes and helmets. Mario set out to find a home near both the school and bike trails with a big enough garage to store all the extra equipment. As the program grew, Mario gave up more of his home for storage, from the basement to spare bedrooms. After four years, the program became part of the non-profit group Trips for Kids National, and Mario became a member of the board for the Ottawa chapter.

Into his 30s and with a good job, Mario remained frugal. He’d wear the same pair of gloves or hand-me-down rugby shirts from his brother, opting to have them sewn if they were torn, instead of replaced. For footwear, he’d put on either cycling shoes or his black cowboy boots that he got on a trip to Calgary. But when his beloved Calgary Flames came to play in Ottawa, Mario would splurge to buy tickets in the lower bowl.