Originally raised as a guard donkey to protect livestock, she made a mid-life career change in April and has become a rising star in the meeting-crasher business during the pandemic 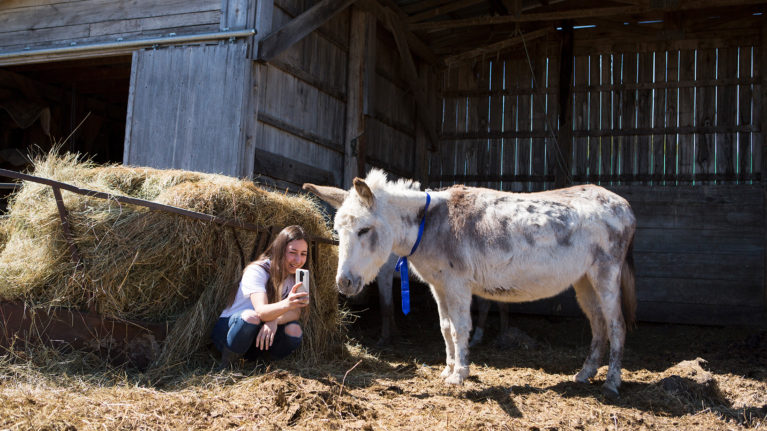 Farmhouse Garden’s Barabash and Buckwheat dial in to a recent Zoom call. Attendees were playing a game; Buckwheat wore a blue tie to indicate he was a member of the blue team. (Photograph by Della Rollins)

In a bid to liven up his regular Friday video-conference call, Andrew Price recently invited a fresh face to the meeting. But instead of noting his guest on the agenda, the executive decided to keep her a secret. The reason: she’s a complete ass. That’s not an insult. It’s just the type of humour she tends to trigger on these kinds of calls.

After the pandemic hit, the Scouts Canada CEO began hosting weekly staff meetings for the non-profit’s 200-odd employees across the country. On May 8, Price took the virtual floor from his home office in Ottawa until 2:06 p.m., when his video feed was interrupted by an unusual on-screen notification: Buckwheat joined the meeting.

After taking a moment to acknowledge the apparent intrusion, the CEO’s visage vanished from the feed. In its place appeared a moustached man with a long-faced associate. “I’m Tim, and this here is Buckwheat,” the man said. “Buckwheat is a donkey, and she is crashing your meeting.”

READ: Why heirloom tortillas are an endangered species

Almost instantly, Price was fielding text messages from other Scouts Canada executives who feared something malicious was afoot. “I had several who thought it was a real hack,” he recalls, “and then most people were just loving it.” Suspicion gave way to pleasant surprise as laughter poured through the conference’s chat window, eventually teeing up what’s become a boilerplate pun at these appearances: “And here I thought I was the only ass on the call!” an attendee cracked.

Before COVID-19, 12-year-old Buckwheat was just another resident of Farmhouse Garden Animal Home, a former cattle ranch in Uxbridge, Ont., that was converted to an animal rescue in 2016. Originally raised as a guard donkey to protect livestock, Buckwheat made a mid-life career change in April and has become a rising star in the meeting-crasher business. At a time of heightened anxiety and social distancing, Price thought a farmyard interlude would kick a little joy into the meeting. “There are not a lot of positives [during the pandemic],” he says, “and this is a cool way to not only give back to the community, but to have a lot of fun.”

Like many organizations hampered by public health orders, Farmhouse Garden had to suspend fundraising visits to its sanctuary, a one-hour drive northeast of Toronto. Besides Buckwheat, the farm has a horse, a handful of chickens and ducks, and 29 cows that depend on monthly charity drives for food. With virtual conferences becoming a sign of the times, executive director Edith Barabash saw an opportunity to pick up the slack and deliver a few laughs along the way. So far clients have included everyone from elementary schools to ICU doctors. The program was inspired by similar operations south of the border, including a coalition of American sanctuaries who’ve partnered to provide “Goat-2-Meeting” conference calls. It features a variety of animal ambassadors (cloven-hoofed or otherwise) from farms across the United States.

But in Canada, Buckwheat has been making hay, so to speak, booking several meetings a day—to the point that her new-found stardom appears to have gone to her head. “She’s definitely become a diva,” says Barabash. “Every time she sees me, she expects me to hand her a bowl of treats.” To get the best out of Buckwheat on camera, volunteers bribe her with oats and chunks of dried apple, which she gently grasps with quivering lips. She’s also got a penchant for gazing at herself onscreen, so camera operators use the front-facing camera on their phones to keep her interested.

But what really makes a meeting magical, Barabash says, is when Buckwheat is sprung on an audience by surprise. “A donkey,” she observes, “is so random.” After the big reveal at the Scouts Canada meeting, the audience was bouncing off the chat-room walls—and fawning over the rest of the farm’s fauna. Besides Buckwheat, they got to meet Willard the muck-loving duck; a steer named Gord (after Gord Downie, because he was born on the day the Tragically Hip frontman died); and Melody the horse, Buckwheat’s pushy (and often jealous) paddock-mate.

The virtual visit couldn’t have come at a better time for Kate McNeil, a scouter relationship manager who joined the May 8 call from her home in Warkworth, Ont. The past few weeks have been difficult for her family, she says. She and her husband have been juggling their jobs while caring for their five-year-old son at home, and McNeil has to plead with her boy to keep quiet for business calls. Earlier that week he confessed to her that he felt lonely. “When Buckwheat came on the screen, I immediately called him into my office,” she says. “His face lit up and his excited shrieks and laughter filled our home. For once, he was included in the call. He was allowed to be loud, and he smiled and laughed for 15 minutes.”

Even as Ontario reopens for business, slowly easing restrictions on public gatherings, Barabash isn’t sure when the public can visit the farm again to connect with the animals in person. But with access to a new audience beyond provincial borders, she doesn’t expect Buckwheat to quit crashing meetings any time soon—not while laughs are still in demand, and the barnyard star is hot to trot.

Price discovered as much when several employees emailed him after the meeting to express their gratitude. Many said it was the most fun they had all week. “For our audience,” Price says, “this is just what the doctor ordered.”

This article appears in print in the July 2020 issue of Maclean’s magazine with the headline, “An episode of hee-haw.” Subscribe to the monthly print magazine here.