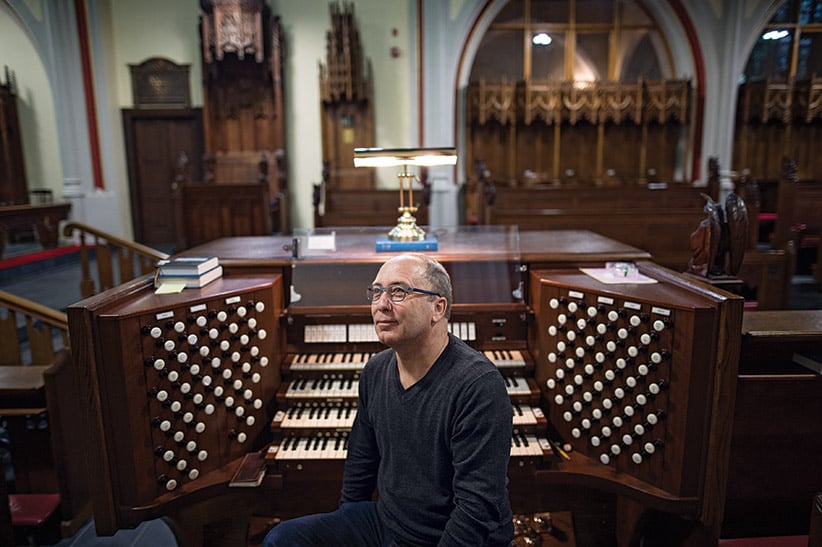 Robert Hiller plays the organ at the Cathedral Church of All Saints in Halifax, NS while tuning the instrument on Thursday, December 17, 2015. (Photograph by Darren Calabrese)

Deep behind the pulpit, a chamber full of pipes hides like a tree fort in the church walls. Robert (rhymes with Colbert) Hiller straps on a headlamp, crawls through an elfin door, scales a ladder and tiptoes through ranks of upright pipes. “Give me octave four! Now the trompette!” he calls down to his assistant on stage, who plays each key while Hiller taps the pipe into tune. “I hope it’s not another bird today,” he mumbles while peering down one clogged-up pipe. Outside the church—a hall lit through stained glass in Orillia, Ont.—Hiller’s car is parked in the reverend’s parking spot. A scribbled note on his dashboard reads ORGAN TUNER.

Hiller, 61, is one of the last full-time organ technicians in Canada. He represents Casavant Frères, the world’s largest organ-building company, founded in 1879 in St-Hyacinthe, Que. Hiller and a crew were once busy installing and servicing organs in hundreds of churches in rural Ontario and Toronto (where Hiller now lives), along with the rest of Canada and the U.S. “In the ’60s, we were selling organs like cupcakes,” says Hiller, who began tuning after dropping out of Grade 10 in Val-d’Or, Que. He first tuned pianos but switched to organs for a better-paying, more uplifting job. Although he was neither religious nor musical, the demand for organs (and the offer of training) attracted him. In Hiller’s early days, Casavant Frères was one of eight organ builders in Canada; it employed 250 people and built an average of 50 organs per year. [As of 2016] Casavant is one of three companies remaining; it employs 58 people and in 2015 built eight organs, just two in Canada.

The decline parallels the decline in church attendance. As parishes lose funding, Casavant’s traditional customers can no longer afford to buy pipe organs, which commonly cost $1.5 million outright, or to maintain them; organs run $125,000 for routine repair jobs and $1,000 per year to tune. Organ technicians charge around $50 to $80 per hour plus a wage for their assistants; for Hiller’s work in Orillia, he calls on 38-year-old Andrew Barker, who works with Hiller two to three days per week. With fewer new churches arising, says Hiller, “the work’s dried up. All the little churches in town have closed or call us every two to three years. All of this is gone.”

Aside from one small Montreal company, Juget-Sinclair, Casavant’s rival in Canada is Orgues Letourneau, whose original team of 65 is down to 28. “It’s pretty saturated,” says Fernand Letourneau, the founder. “Some people are very worried about the future.” 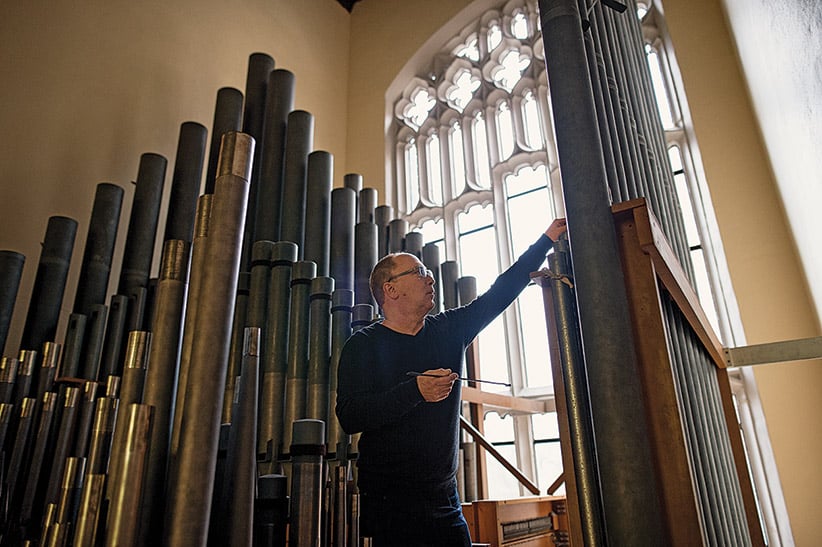 Robert Hiller plays the organ at the Cathedral Church of All Saints in Halifax, NS while tuning the instrument on Thursday, December 17, 2015. (Photograph by Darren Calabrese)
Darren Calabrese

The real competition: electronic keyboards, which offer temptingly cheap alternatives. An organ commonly contains more than 4,000 pipes, with a pump to blow air through the pipes and, on stage, four or five tiers of keys and a buffet of other buttons. “Keyboards don’t weigh 25 tonnes,” explains Simon Abbott, an organist in Halifax. “They don’t need to be tuned or cleaned, and they don’t run the risk of getting an entire Christmas tree sucked up the tenor bass.” (Such an emergency occurred at a Halifax church, where the organ chamber formerly doubled as a storage room for decorations.) Hiller saved that organ, and services others in Halifax, but he no longer works in Moncton, where nearly all the churches have switched to keyboards.

Less direct factors also hurt business. The increase in traffic in Toronto means he burns more gas and time getting to appointments. “The traffic’s just killing us,” he says. The milder Canadian winters have been disruptive because organs don’t go out of tune as quickly in warm weather—the cold changes the diameter of certain pipes. And fewer people are learning the organ, leading some churches to switch to keyboards or pianos—or guitars, in hopes of attracting young people. “About half of the sacred music being put out now is not for organs,” says Abbott. In November, Hiller attended a meeting of the International Society of Organ Builders. “Everyone’s got a long face,” he says. “They don’t want to let go of their guys.” 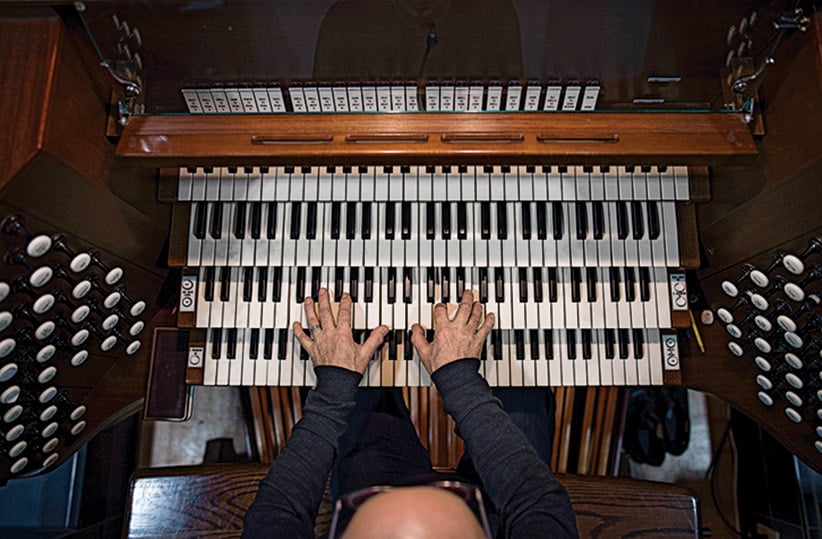 Robert Hiller plays the organ at the Cathedral Church of All Saints in Halifax, NS while tuning the instrument on Thursday, December 17, 2015. (Photograph by Darren Calabrese)

For thousands of years, organs have represented a profound ability to transcend human limitations. In 300 BCE, a Greek engineer named Ktesibios was obsessed with creating an instrument that didn’t depend on the finite air supply of the human breath but rather could hold notes indeﬁnitely. The organ became the accompaniment to games in the amphitheatre in Rome, and in the Middle Ages made its way into churches.

To trace the history of the organ is to trace the evolution of music’s relationship with faith, but also technology—in recent times university chapels often recruited football players to operate the mechanical pumps, which are now giving way to electrical pumps. Organs can now sound for even longer at a time, and the extreme commitment of organists means they need not ever go quiet. In a famous organ story related by Abbott, an organist at the Christ Cathedral in Orange County, Calif., continued playing even after a tiger named Felicia escaped from the church menagerie. Other organists have displayed a subtler courage. During one wedding at which a groomsman forgot his pants, Abbott lent the man his bottoms and played the gig in his underwear.

To stay afloat, Casavant Frères has expanded overseas, sending Hiller to help install organs in South Korea and China. Orgues Letourneau has built organs in Australia, Austria and England, mainly in concert halls. To compete with the features of keyboards, both also offer organs with built-in computers for playbacks, and wireless technology so organists can move the keys anywhere on stage.

Hiller now travels to Asia for three months at a time and installs and fixes computer systems with people who don’t speak English. He is away from his two grown children and his wife, Alice, who administrates their organ service. He hates adjusting to the 12-hour time difference. “It’s murder,” he says. “I’m up at 4 p.m., shaking because I’m so tired.” Where Hiller once hired full-time assistants who travelled everywhere with him and became his friends, he now posts job ads to find part-time assistants in each region he visits. And he’s still short of work. “I had no big projects this summer,” he says. “My wife says, ‘What are we going to do?’ ” 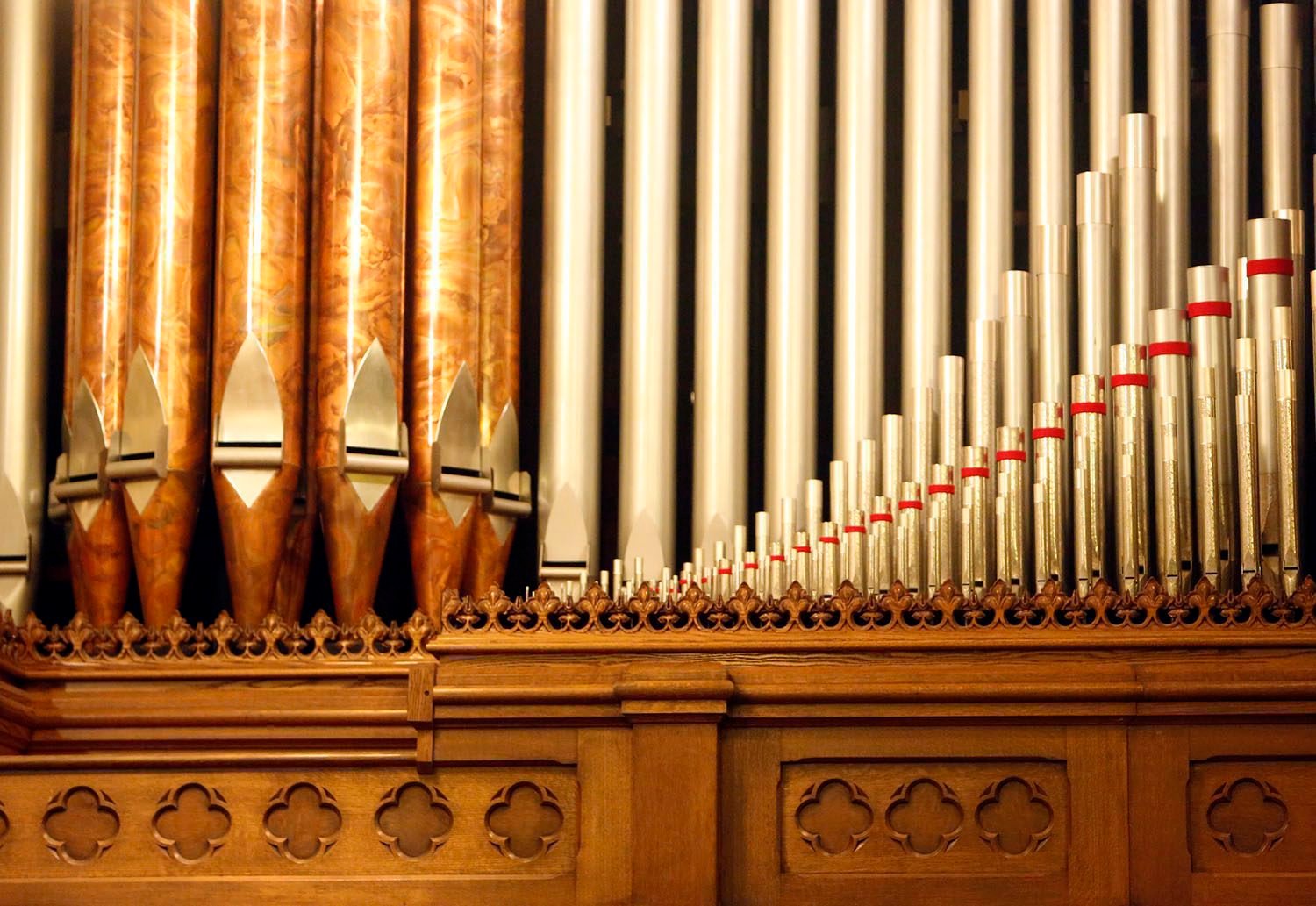 After several months of effort by workers from Cornel Zimmer, of Denver, the refurbished Wicks Organ makes its debut in a free concert at Trinity Episcopal Church in Fort Wayne, Ind. (Chad Ryan/The Journal-Gazette via AP)

Organ tuning may sound like a genteel job, but it’s not as pretty in practice. Since the pipes are large enough to swallow up wildlife, he often has to saw open a pipe to remove a rotting bird or mouse. “Bats are a frequent thing,” he adds. “Sometimes they smell really gross.” Squirrels tend to steal the smallest pipes to build nests. Even for Hiller, who’s five foot three, the chambers are also precariously small when repairing the largest pipes, which each weigh 900 lb. and stand twice as tall as a full-grown giraffe.

Hiller works by ear, leaning over each pipe carefully so as not to disturb any others. “You bend at the hips, never squat,” he explains. Sometimes he switches with his assistant, playing the keys and instructing the assistant in the chamber. “Sharpen a hair!” he calls up. He cocks his head to scrutinize each note—the lowest trumpet to the highest flute, Darth Vader to Pippin. Inside the chamber, the sound of a note is about 100 decibels. A landing airplane is 90. The work is especially hard when a custodian insists on vacuuming while Hiller adjusts a pitch, or when an amateur organist has muddled the pipes while attempting a DIY tuning job with a butter knife.

Not everyone plays nice in the organ industry. Along with Orgues Letourneau, which is based just up the river from Casavant Frères, about 150 organ builders work across the States. “Some are on the shady side,” says Hiller. “Some are very hungry and aggressive in their sales tactics.” Letourneau explains how some companies give customers a quote of $1 million, knowing “darn well” it will cost an extra $600,000. “We know who to trust and those who must not be trusted.”

Further, while Casavant’s retrofitted instruments are still pipe organs, other companies are selling entirely digital ones, consisting of about 20 speakers and amplifiers mounted on the wall to play recordings of pipes. “There has been a big battle in the business between the pipe organ people and the digital organ people,” says James Chubb, a fourth-generation organist and former software developer for a digital organ company in Markham, Ont. “It is driven by an emotional, irrational romance with the pipe organ.” Chubb says properly designed digital organs can sound better than pipe organs for about one-quarter the price. But in Hiller’s opinion, “the amplifiers crap out. The speaker just self-destroys. The sound of the [pipe] organ—the way the sound dissipates—you can’t duplicate that.”

When Hiller finishes his job in Orillia, the organist jokes about paying him in pews. Money aside, Hiller finds reward in listening to a freshly tuned organ play in concert. “It just sounds solid,” he says. Letourneau is equally proud of his company’s work: “We have decided to build organs of the highest quality known today. They will last for 200, 300 years. Sometimes I think about it and I wish I could come back to Earth to see it.” Organist Blair Bailey compares the instrument to the Wizard of Oz. “It makes this big impact like the face of the wizard, but the person making it all happen is just a normal human being.”

Although Hiller doesn’t play the organ and prefers listening to rock ’n’ roll, he cares about the historical significance of the instrument. Ever since he heard about a church closing in P.E.I. that was about to throw away its 1898 Casavant, he’s been determined to move and save the organ himself. “I’ll fight the organist to do it if I have to,” he says.

One thing weighs on Hiller; he isn’t sure how to pass on his work to the next generation. “In five years, I’m going to be dying,” he jokes. “I’m not sure who’s going to take it over.” Barker, his assistant in Orillia, tells him all his assistants could start a collective. “We could put our minds together and maybe live up to your legacy,” he says during their lunch break. Hiller’s son served as an assistant in his teens, but he quit to work at an Internet café and study computer programming. Hiller’s daughter is a seamstress and blogger who plans to learn textile design. Hiller offered one man from Saskatchewan a full-time job with the promise of taking over the business, but the man quit after a week because of commitments back home. “I leased him a car even!” says Hiller. “So I’m still looking.”

As Hiller leaves his appointment in Orillia, he jots down his work in his notebook. The first entry is dated March 22, 1979. “Tightened up loose tongues. Repaired dead notes,” reads one memo. “Piston is sluggish. Middle F is clicking,” reads another. The dates of Hiller’s recent entries are weeks or months apart. The book is now fading and wilting, with just a sliver of pages left.