The first crop of #MeToo books reflect the movement's complexity

The meme unleashed discussion of gendered inequities, including the continuing wage gap and the nature of consent 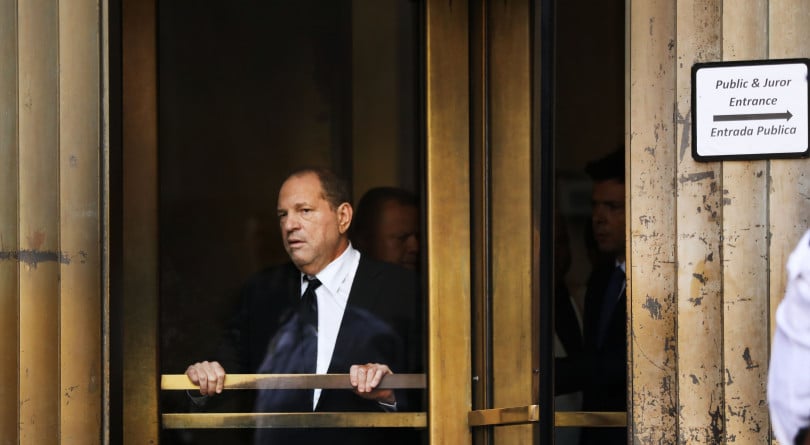 Harvey Weinstein exits court after an arraignment over a new indictment for sexual assault on Aug. 26, 2019 in New York City. (Photo by Spencer Platt/Getty Images)

The first of what’s destined to be library of #MeToo books arrived in October, the month now earmarked as the anniversary of a hashtag heralded as a long-overdue corrective social movement or derided as a “witch hunt.” Oct. 5, 2017 was the publication date of the first bombshell New York Times story, by Jodi Kantor and Megan Twohey, alleging that Hollywood producer Harvey Weinstein sexually harassed and assaulted numerous women, many of them famous, dating back decades. Ten days later, #MeToo went viral on Twitter; a legion of women (and some men) shared stories of sexual harassment and assault. In the torrent of allegations, numerous men were ejected from positions of power. Discussion of gendered inequities, including continuing wage gap, took centre stage. So, too, did complex issues that broadened the #MeToo umbrella, such as miscommunication over consent in the dating realm. There was backlash, with some raising fears that men’s lives would be ruined by false allegations and that due process would be abandoned.

The initial #MeToo books offer a range of perspectives—and also a reminder that the pressures leading to the metaphorical #MeToo “dam” bursting in October 2017 were mounting for years, if not decades. Vital historical scope is provided in Linda Hirshman’s Reckoning: The Epic Battle Against Sexual Abuse and Harassment, a formidably researched and richly detailed book. Hirshman begins with the rise of second-wave feminism in the ’60s, which introduced  consciousness-raising sessions in which women shared experiences of sexual assault and harassment—essentially the first “MeToo.” The book also lays out key legal and cultural precedents, notably the 1986 U.S. Supreme Court case Meritor Savings Bank v. Vinson, launched by bank teller Mechelle Vinson, which recognized sexual harassment as a category of workplace discrimination. There’s also a chapter devoted to the high-profile 1991 Senate confirmation hearing of U.S. Supreme Court nominee Clarence Thomas in which law professor Anita Hill testified that Thomas sexually harassed her in the workplace. It didn’t stop Thomas from being appointed but did introduce “sexual harassment” into mass culture.

READ MORE: Inside the first year of #MeToo

Hirshman also uses the #MeToo lens to recast history. She observes that the first leaders, like Vinson and Hill, were African-American. She also revisits Bill Clinton’s sexual relationship with White House intern Monica Lewinsky to make the point that the conservative movement wasn’t the greatest impediment to equality. Rather, feminism’s “frenemies” were liberal men and women who presented themselves as allies while asserting that “America could accommodate both political gender equality and sexual libertinism in one culture.” While men may have done this out of libidinous self-interest, Hirshman writes, women were “not wanting to be cast as man-hating prudes by sexy liberal male writers and lawyers, potential mates after all.”

Clinton’s impeachment gave traction to both Fox News and third-wave feminism enabled by online platforms such as Feministing and Jezebel, Hirshman notes. Between protest of rape on campuses, multiple accusations against Bill Cosby and Bill O’Reilly, the election of Donald Trump and the Women’s March, #MeToo was waiting to explode. Hirshman ends with the 2018 Senate confirmation hearings that saw Christine Blasey Ford accuse U.S. Supreme court nominee Brett Kavanaugh of assaulting her when they were teenagers. Its echo with the Clarence Thomas hearing is duly noted, as is the fact both Thomas and Kavanaugh now sit on the highest court in the U.S.

The protections provided by power underline Jodi Kantor and Megan Twohey’s She Said: Breaking the Sexual Harassment Story That Helped Ignite a Movement, a riveting account of exposing the Weinstein story. The authors detail their shoe-leather journalism —knocking on doors, pouring through legal documents, dealing with lawyers and editors, and establishing trust with sources who included Gwyneth Paltrow and Ashley Judd. Initially, Kantor and Twohey feared no one would talk (in time, more than 80 women alleged Weinstein assaulted or harassed them). How Weinstein’s power and bullying ways allowed him to evade exposure for decades is laid out—he bullied media outlets writing about him, including the Times; he bought silence from accusers via non-disclosure agreements; he hired global private-investigation agency Black Cube to dig up dirt on anyone who threatened him.

RELATED: Kristin Raworth: #MeToo can become a ‘journey to change’

She Said extends beyond the Weinstein story into the Times’ continuing investigations into harassment in blue-collar workplaces, which introduced McDonald’s employee Kim Lawson, now part of a states-wide sexual harassment suit against the fast-food giant. Patterns emerge. In their investigation into Blasey Ford, the authors reveal she was represented by Deborah Katz, a young lawyer in the landmark Vinson Supreme Court case outlined by Hirshman. The book’s last chapter brings some sources, including Lawson, Blasey Ford, and Judd, to a two-day session at Paltrow’s house to connect and reflect. It sounds gimmicky but yields insight. She Said  ends with rhetorical questions that can only be answered with time. Has the “movement” their story triggered gone too far? Or not far enough in eradicating systemic abuse?

As Robyn Doolittle’s Had It Coming: What’s Fair in the Age of #metoo makes clear, much remains to be learned. In its focus on sexual assault and Canadian courts, the book can be read as an extension and expansion of Doolittle’s heralded 2017 Globe and Mail investigation, “Unfounded,” which revealed that on average, Canadian police forces classified some 20 per cent of sexual assault complaints “unfounded” (i.e., not credible and to be dismissed). It summoned changes in procedures; some “unfounded” cases were reopened, went to trial and saw convictions.

Had It Coming doesn’t address the power imbalances underlying assault. Nor does it look at issues surrounding harassment or the way #MeToo fits into a historical continuum. Throughout, Doolittle injects herself into the narrative as she interviews experts. The book can be best read as a useful primer on the myths still embedded in how sexual assault is treated within the courts and culture (the “she had it coming” victim blaming) and the disconnect between how consent is taught in school and how people actually have sex. There’s a chapter on Canada’s pre-#MeToo moment spurred by accusations against and the trial of CBC radio host Jian Ghomeshi and another on big post-#MeToo stories such as the allegation that comedian Aziz Ansari had not respected “non-verbal cues” on a date.

READ MORE: Why a federal #MeToo law won’t be enforced any time soon

Doolittle also weighs in on the purported, overblown, #MeToo divide between generations of women. She interviews Susan Brownmiller, the prominent ’ 70s feminist and author of Against Our Will, the influential 1975 book that identified rape as a crime of power and inspired “Take Back the Night” marches. During their conversation, Brownmiller mentions “consciousness-raising.” Doolittle says she’s unfamiliar with the concept, which clearly surprises Brownmiller, who credits ’70s “conscious-raising” sessions repeatedly in Against our Will for stoking her activism. Anyone who read her book would be familiar with the concept.The older women is gracious as she explains to the younger.

Doolittle’s interest in Brownmiller was prompted by comments the older woman made in 2015 about women taking responsibility for self-protection from assault, including recognizing that they can’t drink as much as men. Blowback was swift, reflecting the either-or that often attends discussion of sexual assault; Brownmiller was denounced for policing women rather than critiquing men who rape. That reflex is also known as “himpathy,” a term coined by Kate Manne, a philosophy professor at Cornell University, to describe “the inappropriate and disproportionate sympathy powerful men often enjoy in cases of sexual assault, intimate partner violence, homicide and other misogynistic behaviour.”

As She Had it Coming notes, the issues raised by #MeToo can’t be solved by women alone. On the topic of what constitutes redemption and forgiveness, Doolittle interviews Lucy DeCoutere, a complainant in the Ghomeshi trial, who expresses frustration with Ghomeshi’s “apology” published in New York Review of Books. She spends more time interviewing interviews men embroiled in various #MeToo-related scandals: Steve Paikin, the TVO host accused and cleared of sexual harassment, and former federal judge Robin Camp, who was removed from the bench after a disciplinary hearing was called into his behaviour in a 2014 sexual assault trial during which he asked the complainant why she hadn’t kept her “knees together.” Camp, who underwent sensitivity training as part of the hearing process, doesn’t offer much insight, but his lunch with Doolittle is telling. At one point he asks whether she’s OK to continue with the interview because she has had two beers. Doolittle convinces him she’s fine, and then laughs it off. But the comment is worth further examination as an example of systemic power imbalances—and how ingrained stereotypes about women can persist, even after “sensitivity” training. Unfortunately, Doolittle doesn’t pick up on it.

Rape myths and “himpathy” are laid bare in the eloquent, often raw, Know My Name by Chanel Miller, the rape victim known as “Emily Doe” in the 2016 trial of Stanford University student Brock Turner. Miller was 22 when, in 2015, she was found half-naked and unconscious behind a dumpster on Stanford grounds by two men who intervened to stop the assault. The sympathetic treatment given Turner, a white, varsity athlete from a wealthy family, by the court and media garnered international attention. Miller’s powerful victim impact statement also received global attention and praise. Outrage ensued when Turner, convicted on three charges of rape, was sentenced only to six months in county prison.

Miller’s memoir transcends the #MeToo genre. She identifies as a victim but asserts, “I am not Brock Turner’s victim. I am not his anything.” Miller charts the aftermath of the attack, how she was “flattened, characterized, mislabelled and vilified in court” in visceral detail. She feared she wouldn’t be a “good victim” because she’d passed out drunk. Her book reveals rampant double standards: Miller was grilled about why she was at a frat party, why she drank so much, even about her relationship with her boyfriend. “They seemed angry that I had made myself vulnerable, more than the fact he had acted on my vulnerability,” she writes. “Himpathy” runs rampant. Turner, not Miller, was the one seen to have lost everything.

Miller frames herself within the historical continuum leading to #MeToo. She was a student at the University of California, Santa Barbara in 2014 when Elliot Rodger’s misogynist campus rampage killed six and introduced “incel” to mass culture. She writes of enduring everyday physical encroachments by men, of watching Donald Trump boast about sexual assault, of the rise of #MeToo and of attending a candlelight vigil in September 2018 for Blasey Ford. The realization she is one of many is touchingly rendered in her description of experiencing a global reaction to her victim statement a year before #MeToo proper; she received thousands of notes along with shared stories and gifts. “The world did not plug its ears, it opened itself up to me,” she writes. “I was surrounded by survivors, I was part of a we.” Sexual assault is abetted by silence, Miller writes: “We will speak, we will speak, we will speak.” And as #MeToo as a mass movement moves past its second anniversary, we can count on a rising chorus of #MeToo books to do just that.