Move over, sushi. It's time for salami of the sea

It's not nose-to-tail dining, it's tail-fin-to-gill: A Toronto chef brings his genius with marrow and off-cuts to coastal Italian cuisine 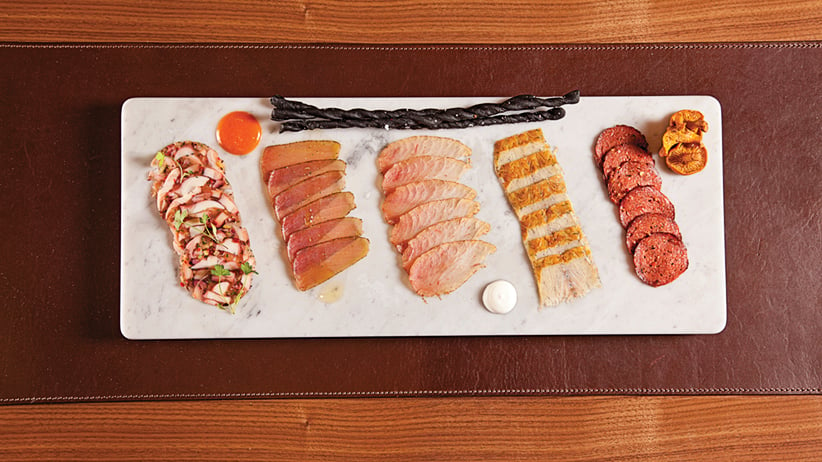 If you have ever wondered what the Italian chef who popularized deep-fried prosciutto-wrapped lambs’ brains at Toronto’s Buca eats while journeying through coastal Italy, I can tell you it’s pretty much as you feared. And maybe worse. “Cod stomachs and squid sperm sacs!” Buca’s Rob Gentile told me, excitedly. “And tuna blood . . . ”

Gentile related the story as he worked in the kitchen at his Buca Osteria & Bar, which opened Oct. 14 in Toronto’s Yorkville district. He was in the midst of one of his customary routines: A whole animal was laid out on the chopping block in front of him, and he was going at it with a butcher’s knife, cutting and trimming and sorting the results into separate piles according to their culinary destiny.

Over here, some tidily trimmed loins intended for salt curing and maybe some cold smoking. Nearby, the spinal column, on deck to have its marrow extracted. In the next bin over, a long cut of ultra-fatty belly, to be cured and served in thin strips of lardo. And over there, some dark and ruddy off-cuts, which many cooks would toss in the rubbish, but here were more likely to end up slow-cooked, and shredded into pasta, or just minced, heavily spiced, and served raw, as ’nduja.

But if you are thinking all this sounds like just another snapshot of a decades-old culinary trend—an offshoot of nose-to-tail dining called salumi or charcuterie, depending on locale—think again, because the animal Gentile was working over this time had never squeaked—only splashed. In place of the customary 180-kg heritage Berkshire, chef Gentile was giving the treatment to a 40-kg swordfish. “On the coast of Italy, the culinary philosophy is the same as with meat,” Gentile continued, telling me about the trip that ultimately percolated into his new restaurant. “There is never any waste. It’s amazing.”

Coastal Italian cuisine is the focus of this new Buca act, the third iteration of a very successful, top-quality concept. That means fish—and all those slippery bits and pieces jostling inside them, alongside the prime cuts. It was what Gentile was doing with the off-cuts that was of particular interest to me.

Just a few weeks ago, the New York Times proclaimed seafood charcuterie to be a top New York dining trend—but the most interesting example they could cite was the octopus “pastrami” at Bâtard. In London, the wonderful Bocca di Lupo is serving sea bass carpaccio with scallop tartare and, at Luce e Limone, you’ll find wind-dried tuna prosciutto. Italy’s two-Michelin-starred Moreno Cedroni is complementing his old-school cured swordfish and tuna loins with new-fangled squid hot dogs with mustard sauce. Given that it was Cedroni himself who taught Gentile the seafood salumi technique, it seemed likely our Toronto chef would soon be pushing the envelope again, concocting his own mix of the traditional and the original on our turf.

He was. His salumi di mare is not served on wood, as is his usual porcine oeuvre, but on cooling marble. My sneak peek came with some largely traditional albacore tuna (lightly cured and smoked, its texture soft and fatty), yellowfin (firm and salty, rubbed with fennel seed and other pork-appropriate seasonings), and lightly smoked eel with a dipping of buffalo-milk yogourt spiked with mustard. Then there was a finessed classic of soppressata di polpo, a stout octopus sausage flavoured with parsley and set with gelatin (the chunks of octopus were cooked sous-vide and so improbably tender). For accompaniment, there were lightly pickled chanterelles and black squid-ink-infused grissini.

Then there was the tuna ’nduja, spicy and raw like the Calabrian pork original, but with its fish and spice creamily bound with rendered pork fat. Swordfish lardo will be another original. And Gentile’s scallop-and-lobster sausage and salmon mortadella lie somewhere between traditional and new. As do his imaginative deployments of cured fish, such as the smoked herring roe standing in for guanciale in his piscine carbonara. In the end, though, the salumi di mare is a sideshow. The point of the place is to be a showcase for the finest, conscientiously procured fish and seafood—a showcase that, for once, does not include baked filet of farmed Atlantic salmon.