Widowed at 31, she moved to Canada with her 5 children. Always hard at work, she rarely thought of herself. 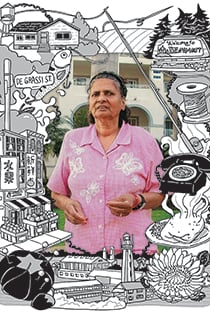 Nazmoon Charran was born in Guyana on Sept. 15, 1938, to Latifan Ali, a seamstress, and Shamsair Ali, an engineer. She spent her early childhood on the west bank of the Demerara River in a small village called La Grange. Nazmoon was the second-youngest of seven siblings from a blended family. From the age of nine, she would accompany her mother to the bustling commercial port of Georgetown, Guyana’s capital, on the other side of the river. There she sold her sewing—a trade passed down from her mother’s father.

At 16, she wed Amin Charran, 18 years her senior, in an arranged marriage and had five children. When Amin fell ill with heart troubles, she came to Canada in search of medical treatment for him but he died less than two months after her arrival, leaving Nazmoon widowed at 31. Nazmoon decided her children, who had been in the care of an uncle in Guyana, would have a better future in Canada. She returned home to pick them up and moved into a house she bought on De Grassi Street, just east of downtown Toronto.

Nazmoon worked hard and was constantly busy. Her first job in Toronto was as a fruit and vegetable vendor in Kensington Market. She earned extra income by sewing garments for special occasions such as weddings. She had a keen business sense and managed her money well. Nazmoon would also make a mean oxtail pulao, and salt fish with roti for her kids’ breakfast, says her son Noel.

She missed her family back in Guyana, says Noel, and was thrilled when her brother moved to Toronto. However, he died of a heart infection in his 30s, and Nazmoon opened her small home to his wife and five children. “She was always thinking of someone else,” says her daughter Patti. Nazmoon would invite anybody in who knocked on her door, always ready to feed them drinks and snacks.

After her children had grown, Nazmoon packed up her bags and moved to Edmonton in 1981. She had heard the drier climate out west would be easier on her arthritis. She spoke to her children and their spouses several times a week (she insisted the spouses call her Mom) and never forgot to call on birthdays and special occasions. Nazmoon loved to regale people with the latest adventures of her siblings, nieces and nephews. She exchanged parenting misadventures with her neighbour Sue Lewthwaite, like the time Canadian border officials called to say her 12-year-old son and a friend were outside Buffalo trying to head to Florida because Canada was too cold. “She was such a good storyteller,” Sue says. “Her facial expressions and body language brought everything to life.”

She loved travelling to the Caribbean and surprising her children with unannounced visits. She also enjoyed exchanging friendly barbs with them when they pulled pranks on her or teased her about her noisy electronic back scratcher.

Soon after she moved west, Nazmoon met Daniel Tites and they became fast friends. Nazmoon was 43 and Daniel was nearly a decade older. They moved into a white bungalow on the east side of the train tracks in Wetaskiwin, south of Edmonton. Nazmoon never spoke about being romantically involved with Daniel, but it was evident they doted on and cared for each other very deeply. They loved fishing together in Beaumont, between Edmonton and Wetaskiwin. Nazmoon owned a store called the Main Street Flea Market on the other side of the tracks, which Daniel helped her run.

As Daniel aged, his mobility worsened. He used to drive Nazmoon everywhere she wanted to go, but now Nazmoon pushed him around in a wheelchair. They created a system to safely cross the rail tracks near their home—a routine they performed several times daily. At the edge of the tracks, Daniel would stand, Nazmoon would wheel his empty chair across and return to help him walk over to his chair.

Early on Oct. 31, Nazmoon packed two suitcases in preparation for a vacation to Cuba the next day. Around 11:30 a.m., they were returning from her hair appointment, crossing the railroad tracks four blocks from home. As they had done so many times before, Nazmoon took the empty wheelchair across while Daniel waited. As a Canadian Pacific train came barrelling down the tracks, the crossing barricades came down and signal lights started flashing. Daniel somehow fell. Nazmoon scrambled back to try to save him. The train struck them both, killing them instantly. He was 84. She was 75.