Fitness fads for the year ahead 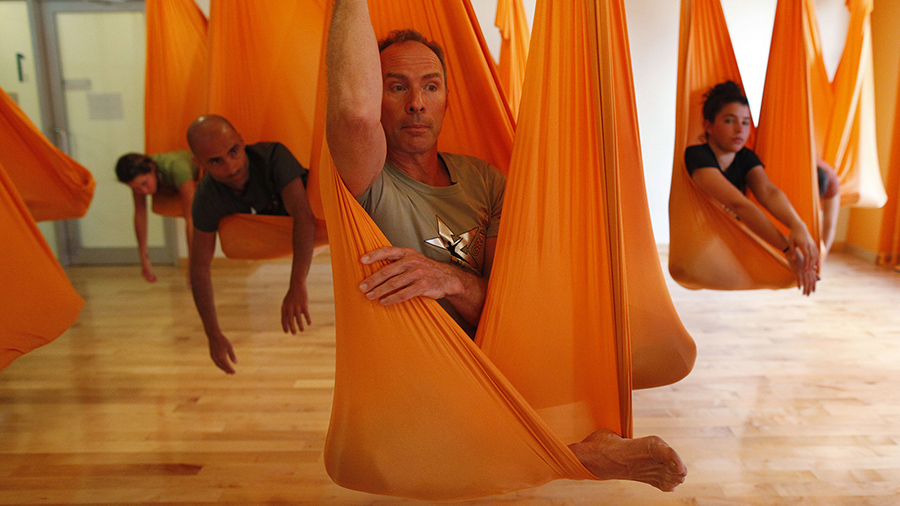 There are so many options when it comes to workouts that a person could be forgiven for being paralyzed with indecision. “The reality in the fitness world now is that everyone is trying to be different and trying to capture different demographics in the most fun way possible,” says Laine Martenfeld, a Toronto trainer who has travelled the world. This is not necessarily a good thing. As Martenfeld says, “Working out is not supposed to be an event. It shouldn’t even be fun. In fact, it should be work.” Whether you think the latest fitness classes are tough, gimmicky, or (shhh) fun, here are a few that are beginning to catch on.

The philosophy of this drop-in studio based in Santa Monica, Calif., is that everyone, from Type A CEOs to single mothers of twins, can fit in time to meditate. Founder Suze Yalof Schwartz, a former magazine fashion editor, has turned herself into, as she says, a “spiritual entrepreneur.” She believes that anyone can “unplug.” Classes are only 30 to 45 minutes long. They range from “Unplug traffic,”­­­ meditation skills to use behind the wheel (no more road rage?), to “Unplug family,” a class for adults and for kids age six and up to help develop compassion for each other, to “Unplug kids,” where your tot will learn the ABCs of mindfulness, which include attention, balance and compassion. Stay tuned, Canada. The founder is planning to take Unplug global.

Dedicated yogis are moving off the floor and onto the surfboard. Studio Revolution is the first studio in Calgary to introduce SurfSet, which offers different styles of yoga and high-intensity interval training, all taking place on a core-engaging indoor surfboard. Even though, they say, it is “giggle inducing” and may look silly, the balance, coordination, strength and stamina required to do yoga or other exercises on a surf board is no joke. They also offer a class called “Surf and sweat,” which is a fast-paced cardio and core-focused session. Another class? “Ripped tide,” where wannabe surfers participate in strength-training sessions, using resistance bands, kettlebells and body weight. If you can’t be in the ocean and are stuck in a gym, working out or doing yoga on a Surfset is the next best way to get a surfer’s physique.

Cykl, Toronto’s first exclusively RealRyder indoor cycling studio, offers intense 45-minute classes designed to get participants “real fit, real fast.” The RealRyder bike has users turn, lean and steer, as if on an actual bike. The classes are described as redefining the traditional spinning workout—and the closest thing to actually being on the road.

At the vaunted Canyon Ranch in Tuscon, there are underwater treadmills. For people who love being in the water, this could be hugely motivating. Exercising in chest-deep water reduces body weight by 80 per cent, and decreases the pain-causing forces of gravity. Still, muscle activity is much higher while walking on an underwater treadmill because of the higher density of water compared to air. Hydrathletics, located in Kingston, Ont., is the first facility in Canada to feature an advanced aquatic therapy pool, including an underwater treadmill, for use by the general public.

Canyon Ranch also offers this non-traditional yoga, all done in a hammock that helps support the body in traditional yoga poses. “Suspension yoga,” is also offered in Toronto at the Flying Yogi. Participants learn inversions and aerial movements to “decompress the spine, strengthen the core and achieve deep ‘delicious’ stretches.” The Flying Yogi also has Infrared yoga with infrared heaters (like the ones used in hospitals for babies), which convert light directly to heat, warming nearby objects—or people—without raising the air temperature. It’s perfect for those who find hot yoga too hot.

FILED UNDER: 2015 fitness year ahead