Anne Kingston: We're watching the emergence of a dangerous 'bad-enough-to-report' threshold before women (or men) should be taken seriously 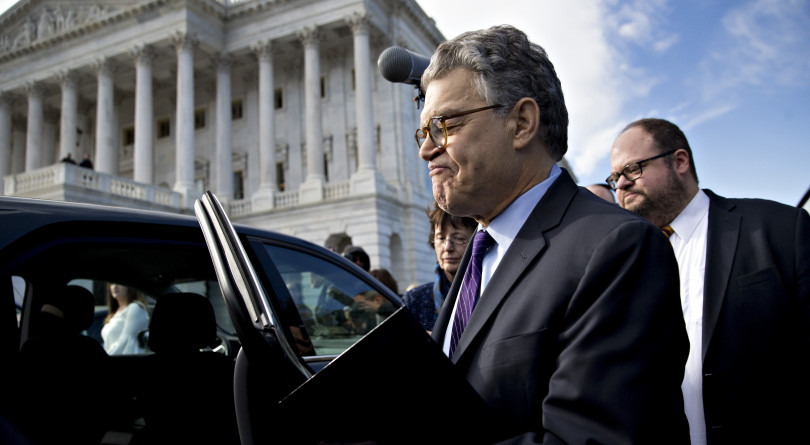 In December 2017, two months into #MeToo, Democratic Senator Al Franken, an early #MeToo ally, resigned after eight women reported that he’d touched and kissed them without consent on occasions dating back more than a decade. Franken’s first accuser, conservative talk-show host Leeann Tweeden, alleged that the former Saturday Night Live performer and writer had sexually harassed her during a 2006 USO tour; she said he had shoved his tongue into her mouth while rehearsing a jokey skit he’d written and fretting that casual gropers and serial rapists wait for it—about sexual harassment. She also released a photo taken on tour showing Franken mugging for the camera, reaching toward her breasts with a leer while she appears to be asleep. Seven additional accounts of unwelcome groping later and the progressive pol was a political liability at the very moment the Dems were attacking accused child molester Roy Moore, then running for the Senate. Franken’s denials and generic apologies carried no weight; 36 Democratic senators, led by Kirsten Gillibrand, called for his resignation. Franken gave it, choosing not to submit to a drawn-out Senate Ethics Committee investigation. And, with that, one of the Democratic’s Party’s most effective Trump critics, and author of a proposed bill addressing workplace sexual harassment, became a zero-tolerance poster-boy.

The Franken case, which gave rise to “Has #MeToo gone too far?” outrage, was a largely unexplored milestone in a nascent movement triggered by reports of Harvey Weinstein’s aggressive sexual assaults, explicit harassment and systemic protections. Franken’s frat-boy behaviour, while gendered and demeaning, was of a far different order, if somewhere vaguely on the same spectrum. The allegations that engulfed Weinstein were criminal. Less clear was how to respond to the microaggressions Franken was accused: the sort of disrespectful bodily encroachments so normalized for most women and many men that they say nothing, fearing that they’ve either misread the situation or will be seen as overreacting. We’re talking the boss who routinely massages underlings who “look stressed.” Or the family friend who delivers a “friendly” bottom grope. It’s the sort of “handsy,” “hair-kissing” accusations recently levelled against Joe Biden that haven’t derailed his presidential bid. Opponents of #MeToo, and even some proponents, voiced concern that Franken’s exit proved that creepy gropers and serial rapists were being conflated—and that a friendly guy couldn’t hug a female friend without facing job loss.

READ: Inside the first year of #MeToo

The arrival of a sympathetic 12,000-word New Yorker profile of Franken by Jane Mayer, whose work was instrumental in shaping the #MeToo movement, sadly fails to address these bigger questions. What the story does do, if unintentionally, is illuminate how, almost two years into #MeToo we’re still telling stories through a pre-#MeToo lens: “great-man” narratives buttressed by retrograde assumptions.

Franken is presented in a shambolic state—clinically depressed, regretful of resigning.  “America had ghosted him,” Mayer writes, adding that he’s “on the losing side of #MeToo,” as if it’s a zero-sum bloodsport, not an attempt to redress systemic inequities. Yet Mayer marshals no new exculpatory facts about his alleged behaviour. There’s far more criticism levied against the behaviour of the “opportunistic,” “vigilante” Gillibrand.  Mayer raises concern over a rush to judgment, lack of proportional punishment and  lack of “due process” that rightfully has arisen from #MeToo. Here, however, Franken isn’t a good example. As the legal historian Mia Brett tweeted: “Your co-workers urging you to resign is not denying you due process.”

Mayer does poke big holes in Tweeden’s story and motives, detailing her pro-Trump, pro-Fox News bias. (She says less about the other seven, all Democrats, except to note that one voted for Franken, as if that somehow mitigated her experience.) At times, Mayer seems like a defence lawyer attacking a sexual assault plaintiff’s character and background: she notes Tweeden posed for Playboy and “participated in other ribald USO skits,” as if that constitutes blanket consent.

That Franken was never accused before, with colleagues seeing nothing amiss, is marshalled as evidence that no misbehaviour possibly could have occurred, as is the fact that Franken has many female defenders. Yet these same minders, Mayer writes, also “stood guard against [Franken’s] possibly offensive humor,” like a “tasteless article” he wrote for Playboy about “scientific advances in sex robots” that nearly derailed his first Senate run. Franken is portrayed as so “oblivious” physically that staff had to tell him not to swing his arms wide when walking, eat with his mouth open or kiss female friends on the mouth. In the next breath, Franken is described as “a warm, tactile person,” “a hugger,” in his words. It’s easy to see how these two tendencies could prove atomic.

READ: Why a federal #MeToo law won’t be enforced any time soon

Oddly, Mayer’s defence of Franken ignores a key revelation of #MeToo: that powerful men’s sexualized behaviour is far less about sexual desire than asserting power and privilege. Franken’s defenders deny the avowed “hugger” and mouth-kisser could ever touch a woman because he’s a devoted husband who “didn’t have a wandering eye.” Mayer quotes comedian Sarah Silverman for the final word: “He has no sexuality.”

But what Franken does have, according to his staunchest defenders, is an outsized sense of entitlement. “He can be very aggressive interpersonally,” one said: “He can say mean things, or use other people as props . . . His estimate of his charm can be overconfident. But I’ve known him for 47 years and he’s the very last person who would be a sexual harasser.” Another male friend’s defence reveals ongoing tolerance of retrograde sexist behaviour, as evident in the U.S. Army still being entertained by puerile Benny Hill-style skits in the 21st century: “Much of what Al does when goofing around involves adopting the persona of a douche bag. The joke was about him. He was doing an asshole.”

Here, “about him,” not “asshole,” is the operative phrase. And that’s a major problem with Mayer’s defence of Franken, which includes the line: “Only two incidents were alleged to have happened after Franken was elected to the Senate,” as if it requires X number before it’s a problem. A rare, key insight is shed when Mayer asks one of Franken’s accusers whether his behaviour was a sexual advance or a clumsy thank-you gesture. The woman makes it clear his motives didn’t interest her; only his actions and their effect on her did. “Is there a difference?” she asks. “If someone tries to do something to you unwanted?” As Mayer sums up: “because she was at work—a professional woman deserving respect—his intentions didn’t matter.” And that’s precisely what’s radical about #MeToo: it presumes someone experiencing abusive or disrespectful behaviour in a power imbalance deserves to be heard.

Mayer ends by quoting lawyer Debra Katz, who represented Christine Blasey Ford, expressing concern over the Franken case. “To treat all allegations the same is not only inappropriate,” she warns. “It feeds into a backlash narrative that men are vulnerable to even frivolous allegations by women.” Yet none of the charges against Franken were “frivolous.” None of the women equated his behaviour with Weinstein’s. None wanted him ousted. They wanted him held accountable for behaviours that are everywhere, all the time, but waved off as benign minor violations when in fact they telegraph disrespect, are deeply gendered, and can be corrosive. The fact we don’t yet know how to define this behaviour as offensive in a measured, proportional way isn’t the fault of the women coming forward.

Yes, it’s easy to view Franken’s exit as extreme and precipitous when a man accused of serial sexual assault is the sitting U.S. president. But defending him by arguing that reporting physical encroachments is “frivolous” is deeply concerning: it implies there should be an arbitrary “bad-enough-to-report” threshold before women (or men) who feel demeaned should be taken seriously. Or, in other words, before they’re allowed to say “#MeToo.”

This article appears in print in the September 2019 issue of Maclean’s magazine with the headline, “#MeToo’s touchy divide.” Subscribe to the monthly print magazine here.