Cassandra Brown shoots out the lights—and the glass ceiling

What comes next for the native of Vernon, B.C. who got a last-minute invite to participate in the 2015 NCAA three-point shootout—and beat all the men 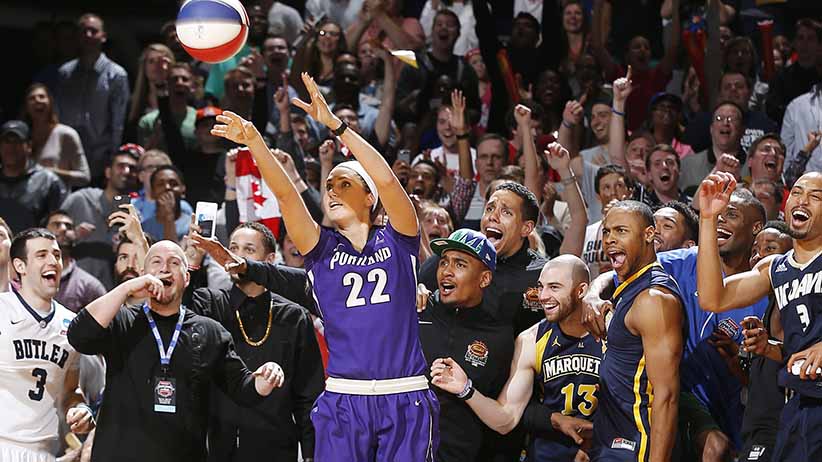 Cassandra Brown—the NCAA’s newest three-point shootout champion—never had the time to realize she was an underdog.

From the moment that the native of Vernon, B.C., and Portland Pilots guard-forward learned that she’d compete in the shootout—just two days before the event—her life was a whirlwind. After getting news that she’d fill in for a last-minute dropout, she hit the gym for an 11th-hour practice with her assistant coach, Megan Osmer, whose boyfriend had assembled makeshift ball racks from chairs and PVC piping. She headed home late, packed her things and got no more than a few hours of sleep. By 6 a.m., she was on a flight to Indiana, where she was immediately thrown into a non-stop schedule: interviews, photo shoots, publicity events, a kids’ hospital visit.

Before she knew it, the late addition was staring down the backboard in the first round of the women’s shootout. “The whole thing went by so fast. It was so nerve-wracking,” Brown tells Maclean’s several days later. “The first round, I was little upset with myself, because I knew I could do better.” Despite her nerves, she earned herself a spot in the second round. And then, the third. By the women’s final, she was in a groove, scoring 17 points from downtown to upset the competition and advance to a battle-of-the-sexes round against fellow Canadian Kevin Pangos, of Holland Landing, Ont., the men’s shootout champion.

“I was honestly not expecting to beat Kevin Pangos, who seems like the best shooter in the nation,” Brown says. “Before he shot, I was joking around with him, telling him to take it easy on me.” Pangos went first, posting an impressive 20-point score. But, when it was her turn, Brown drained nine straight baskets before finishing with 21 points to take the title, sending thousands at Butler University’s Hinkle Fieldhouse into a frenzy. “It’s still surreal,” she says. “It hasn’t really sunk in yet.”

Brown’s Cinderella story truly begins in Vernon, where, as a kid, she joined her elementary school team—people kept telling her she should play basketball because of her height—and practiced on her front driveway. She quickly earned herself MVP prizes at summer camps and stood out for her graceful touch. Early coaches stuck her at centre because of her height, but it wasn’t long before she developed an aptitude for shooting from beyond the line. “[In high school], she would get herself up at six and go shoot hoops before school,” says her mother, Bonny. “I’d say, ‘Sleep in! Forget it!!’ But she was self-motivated. She was on a mission.”

Every weekend for years, Brown’s dad, Robb, drove her to Vancouver to play ball. It was worth it: She landed a spot on the Canadian national junior team and was eventually recruited by, among others, the University of Portland. In her first two years, she logged long minutes, playing in virtually every game, but the intensity of university ball often left her winded; a depressed sternum was pancaking her heart and making it difficult to breathe. She opted for surgery, which left a foot-long bar in her chest. She spent months bedridden and took an entire season off. “I can’t explain how painful that recovery was,” she says. “That was a really tough year . . . I really didn’t think I was ever going to play again.”

But, after eight months on the sidelines, Brown returned for a final season. With 75 three-pointers, she was the league’s seventh-best long-distance shooter. She finished with 1,396 career points, seventh all-time at the University of Portland.

When Brown’s parents heard the news that she’d compete in the three-point shootout, they frantically searched for a bar in B.C. that would televise the competition. After they struck out with their search, they drove down to Washington state and stationed themselves in front of a large-screen TV in a half-empty Buffalo Wild Wings on Holy Thursday. “As a parent, all you want is for your kid to do well,” says Robb. “You never put any extra pressure or expectations. I hope she does well—that’s all you can hope for.” But Robb couldn’t help but get excited as she advanced, round after round. “I’m sure the rest of the people in the bar were looking our way, wondering what was going on,” he says with a laugh. When his daughter took the crown, Robb couldn’t help but break into tears. “We’ve watched her all the way from shooting the basketball on the driveway and driving her to camps to now.”

Brown’s currently in the process of signing with an agency. This summer, she plans to head to Europe to continue her career. “I’ve always wanted to travel, and I’ve never been to Europe,” says Brown, a cheery fourth-year communications major. “If I can do that playing basketball, all the better. I’m not in any rush to work a nine-to-five.”

FILED UNDER: basketball Cassandra Brown Newsmaker of the day