A doorway to a hidden past in Calgary

A building on Ogden Road in Calgary has a rare link to the history of the city's Chinese community. But its future hangs in the balance as it finds itself in the path of the proposed Green Line transit system. 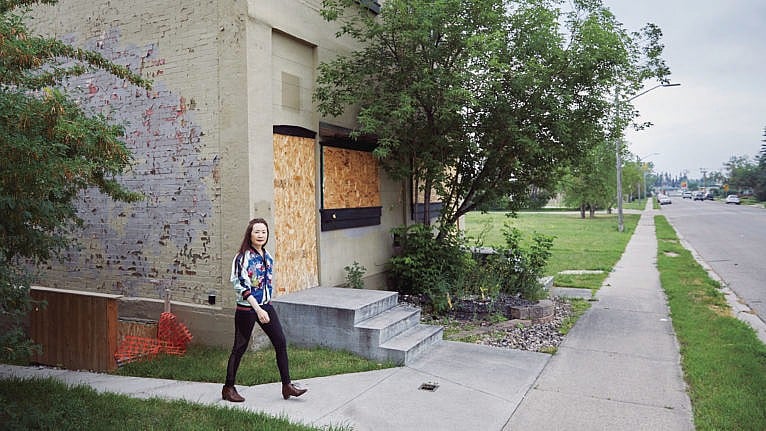 For Feimo, the building is a chance to explore the history of Chinese immigrants (Photograph by Colin Way)

On a half-empty stretch of Ogden Road in Calgary stands an unassuming building, with plywood boards covering its windows and a tree obscuring much of its facade. Its boxy exterior and off-white brick walls betray neither its purpose nor its history. But the utilitarian structure is a 108-year-old vestige of the city’s railway history—and of a marginalized and mistreated immigrant population.

It was once the Hong Lee laundry, a combined washing facility and rooming house run by two Chinese immigrants named Eng Hon Quan and Eng Shon Yun. They are thought to have constructed the building in 1913, in the early days of the town’s time as a regional hub for the Canadian Pacific Railway (CP). In its most recent past, the building was an apartment block.

But the future of 7044 Ogden Road now hangs in the balance, as it finds itself in the path of Calgary’s proposed Green Line transit system. As its fate inches toward it, concerned community members and historians are trying to uncover its past and make a case for why one of the last remaining pieces of the Ogden district’s heritage should be spared—if not for its physical features, then for the stories it represents.

READ: Human remains found on Vancouver Island have opened a door into a lost world

Retired teacher Bonny Warbeck counts among those pressing to save and recognize the edifice. “There’s so little history left in our community,” says Warbeck, noting that the nearby Ogden Hotel, dating back to 1912, is one of the few heritage properties left in the area located southeast of downtown.

For Fung Ling Feimo, an arts administrator active in preserving the history of Calgary’s Chinese population, the building represents an opportunity to explore the stories of Chinese immigrants and their displacement in the city. Running a laundry would have been one of the few forms of employment available to the two men at the time due to the sort of discrimination the Chinese faced throughout Canada, despite their pivotal role in the construction of the Canadian Pacific. Because of its proximity to a CP maintenance hub known as the Ogden Shops, it is likely they washed the clothes of CP workers.

What surprises Feimo, though, is its location. At the time, Chinese people were relegated to a few areas of Calgary; there were three Chinatowns in the city, two of which were displaced by development. The building on Ogden Road wasn’t near any of them. Feimo spoke to elders in Calgary’s Chinese diaspora, and most weren’t aware of 7044 Ogden Road’s connection to Chinese immigrants. “I would love to know: how come this place was disjointed from Chinatown?” she says.

Research by historical consultant Harry Sanders has revealed that, after a roughly three-year turn as the Hong Lee laundry, the then-empty rooming house may have had a stint as an annex to the military convalescent hospital that operated at the Ogden Hotel during the First World War. The building was also a polling station during a referendum on liquor prohibition.

Wendy Tynan, director of communications for Calgary’s Green Line, says the city has halted the original plan to demolish the building by the end of the summer. A decision will be made about its fate following a historical assessment by the province. That review will determine whether the building itself has physical features worth preserving (its of-the-era red brick was painted over, and Tynan says the previous owner gutted its newly renovated interior before handing it over to the city for demolition). If the building doesn’t survive, adds Tynan, its history might be commemorated in some other way, such as an entry on Calgary’s list of notable places.

Whatever the result, 7044 Ogden has emerged from this whirlwind of discovery as something more than just a pile of bricks and mortar on a lonely strip of road. “That’s why we need to uncover these stories,” says Feimo, “and explain to people—not just of Chinese ancestry but the broader community—why the site is significant.”

This article appears in print in the September 2021 issue of Maclean’s magazine with the headline, “Doorway to a hidden past.” Subscribe to the monthly print magazine here.