On pay equity, this is how men can step up in the workplace

Opinion: Start by admitting the pay gap is real. Then follow these seven tips for male allies in the fight for pay equity 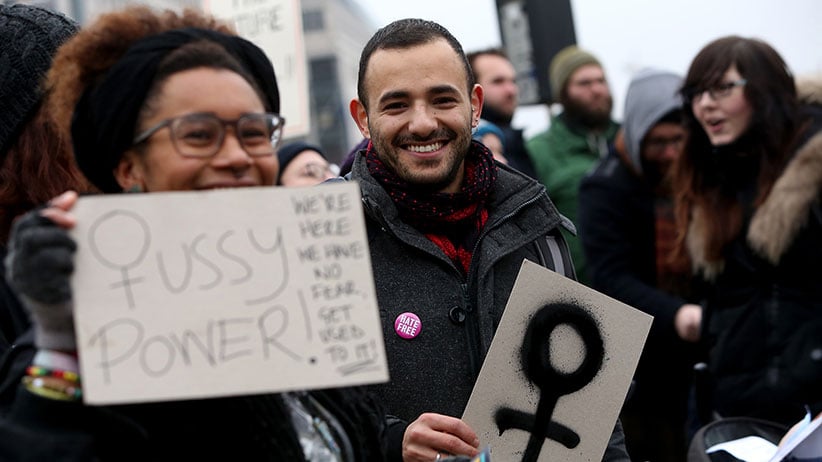 Activists participate in a demonstration for women’s rights on January 21, 2018 in Berlin, Germany. (Adam Berry/Getty Images)

When it comes to workplace equality, there are big ways men can and should help—your strategic vote and donated dollars, for starters. But there are also smaller things to be done, or not done, right now. Here are seven tips to workplace allyship that cost nothing, require no prep and can happen today.

Admit the pay gap is real
Don’t be that dude who doesn’t quite believe in the wage gap, or heard something about these 10 factors that proves it all levels out, or that the whole thing is a myth you’re too wise to buy into. “There’s still a lot of resistance to accepting the wage gap as fact,” says Fay Faraday, co-chair of the Equal Pay Coalition. Replace your conspiracy theories with this hard fact: “No matter how the gap is sliced—hourly pay, weekly pay, annual pay in every industry and every sector—women are getting paid less,” she says.

Tell someone your salary
In December, author Mary H.K. Choi unleashed a viral tweet: “Dudes: If you consider yourself a feminist and an ally…tell three women you work closely with how much you make.” This stupidly simple trick is a great first step in pulling the curtain down on pay inequality. “Secrecy around wage structures is one of the things that lets the wage gap fester,” says Faraday. Woman can’t negotiate fair wages if the salaries of their male colleagues are cloaked in secrecy (ahem, Mark Wahlberg).

Call out bad behaviour overtly
Research consistently shows men dominate conversations in meetings, interrupt women far more than they do other men, even reiterate woman’s ideas and present them as their own (“hepeating”). “Men need to call out male comments for this toxic masculinity,” says Faraday. In conversations where women aren’t privy, allies need to recognize sexism in action and shut it down. “Just say, that isn’t appropriate. It’s 2018, get with the program.”

…and tactfully, too
Clearly you’re not the jerk interrupting or ignoring women, but when you see this behaviour, are you the jerk sitting there watching it happen? Calling someone out doesn’t have to be awkward or aggressive, says Sonia Kang, U of T organizational behaviour prof and research fellow at the Rotman Institute for Gender & the Economy. “You can very neutrally say, ‘Brian, I think Sarah was finishing her point.’ People are nervous to do this because we’re all sensitive to subtle shifts in norms, but this is how you create a new norm.” Do this three times, she says, and you’ll quickly see the behaviour stop and culture shift.

Watch: Women on the pay gap and how we can fix it

Compliment a woman
Generations of bonehead comments on great dresses and nice smiles have left compliments in general a minefield that men too often avoid entirely. Here’s a novel idea: “Move far away from the personal and as close as you can to the professional performance,” says Kang, for a legitimate compliment that any woman would welcome. A thorough analysis, well-delivered report or extra effort that got noticed will all do just fine.

Be your own “work wife” (and stop saying that, too)
Under no circumstances should you ask anyone but a personal assistant to grab you a cappuccino or burrito, nor call your dentist or Uber driver. “The whole notion of ‘work wife’ makes me cringe,” says Faraday. So the next time a birthday card goes around, for example, recognize its existence for the legitimate emotional labour it is. Better still? “Don’t perpetuate this culture,” says Faraday. You buy the damn card.

…and do more for your actual wife
“Childcare and pay equity are deeply interconnected,” says Karen Segal, counsel at the Women’s Legal Education & Action Fund. Statistics Canada reports the wage gap widens when a woman takes mat leave, and again per child, and more so for single than married moms. An easy answer: “Men should take a larger role domestic duties, which would then allow their spouses more time and energy to participate in the workforce.” Or as Faraday puts it, “Do the childcare and cook the food while we’re busy mobilizing.”